The protesters outside Donald Trump Jr.’s Triggered book event—organized by the Los Angeles chapter of Refuse Fascism—didn’t silence him Sunday. Instead, according to The Guardian, conservative fans inside got rowdy after being informed that Trump did not have time to take questions.

TOPICS: News/Current Events; US: California
KEYWORDS: booksales; fuentes; kirk; tpusa; triggered; trump; trumpjr; trumpjrbook; trumpjrinterview Navigation: use the links below to view more comments.
first previous 1-20, 21-40, 41-60, 61-77 next last
To: montag813
Kimberly stupidly suggested they were incels last night. That's not the answer. Team Trump needs to distance itself from Kirk, who has emerged literally out of nowhere to dominate "conservative" activism, when we have no idea who really bankrolls him.

If we continue our current policies on immigration and multiculturalism, which is what TPUSA supports, then our entire civilization will be lost.

Name calling like that is a leftist tactic. You forgot “homophobes” too.

That movie was so well shot it’s not even funny. 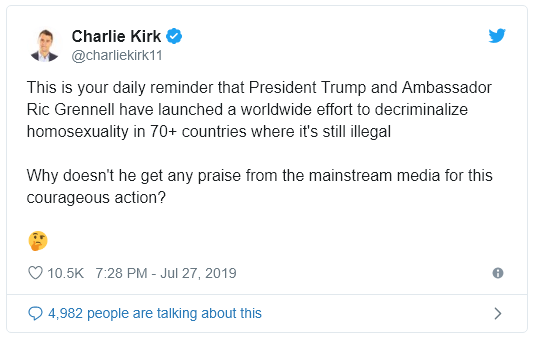 50 posted on 11/11/2019 8:58:12 AM PST by proust (Justice delayed is injustice.)
[ Post Reply | Private Reply | To 48 | View Replies]
To: thefactor
From the article, it does seem like these were white nationalists who were being disruptive. They wanted to ask their anti-Semitic questions and the event was ended in response.

Please consider the possibility that you are being led around by the nose by commies.

If we get immigration and multiculturalism wrong the everything else falls immediately thereafter.

Why not also pay Greta for MAGA activitism, right?

Why not al$o Greenpeace & AntiFa..?

His thinking on all this is almost a clinical narrative, to my read; highway rest-stop ideologue, wow.

That is exactly what they are. They are about as "right wing" as the Westboro Baptist Church agents provocateurs. They deserve absolutely no air time. Sorry, I don’t think Homosexuals should be Murdered in Cold Blood by their Governments for the “Crime” of being Homosexuals.

Obviously POTUS Trump and I agree on this while some here don’t.

That is an incredibly “conservative” position!

The Left would have no problem Murdering us for the Crime of being Conservative if they could get away with it.

Conservatives do not believe the same of them.

That is what happens when Civility is pushed aside because it interferes with their Agenda. Lawlessness is applauded, something I thought I would never see in my Lifetime.

These guys are young men. They are VERY angry. They want immigration into first world nations stopped and they don’t want to talk about it any more.

“Lawlessness is applauded, something I thought I would never see in my Lifetime.”

Homo sex is against natural law, most religious law, and against the laws of many nations.