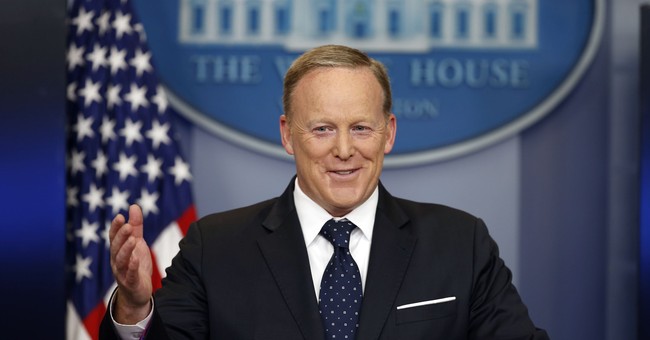 I did something Monday night that I’m not proud of. It was something I’d never done before, a fact I was quite happy with until then, but it’s something I’ll likely do again…maybe even in front of my children. I watched “Dancing With The Stars.”

It’s a truly awful show, and millions of Americans love it.

No, I watched it because I was finally curious to the point of needing to see for myself just how bad of a dancer former White House Press Secretary Sean Spicer really is.

I’ve been aware of the existence of the show since it started, back when some of the contestants could legitimately lay claim to at least having been stars in the recent past. Of the current crop, I looked them up and had heard of 5 of the 12.

But the one I knew the most about was Spicer. His mere existence on the show had liberals' blood pressure spiking from the moment the participants were announced.

With that in mind, I generally dismissed the outrage I’d seen in news stories and social media about how bad he was. Liberals hate his very being, so any critique of his dancing (even that awful neon green shirt) was viewed through that lens.

Finally, with nothing else worth watching on, my morbid curiosity got the best of me and I flipped to ABC.

Sean is not good. He’s able to do the steps and trooper through it, looking like he’s having a lot of fun in the process, but he wouldn’t get a chorus job in a high school production of “Bye Bye Birdie.” But then neither would most of the other contestants, even some of the ones who aren’t 48 years old and built like a retired linebacker.

So why the rage and obsession with Spicer over any of the other never-going-to-be-Broadway-bound clumsy terpsichoreans? You know why – he worked for President Donald Trump.

Working for this administration is like tattooing a bullseye on your back for the rest of your life. The fascistic left-wing mob has an entire infrastructure set up to harass and try to deny anyone of note who worked in the Trump administration all future employment. The left is full of sick people who deserve the bad things that happen to them.

With that in mind, and despite his less than graceful moves, I did something else I’ve never done – voted. Not in elections, I’ve always done that, but I voted in a reality show…20 times, all for Sean. I voted 10 times via text message, and 10 more times on their website. (Yes, you can vote up to 20 times, and yes, it is stupid. I didn’t write the rules, take it up with the network.)

According to what I’ve heard, the judges have been disappointed that Spicer hasn’t been eliminated yet. Judging by their reaction Monday, and that of the California crowd (where the show is filmed), they were all shocked and a little disgusted when Spicer was the first person announced as “safe” from elimination. They clearly want him gone.

As does the “dance critic” at The New York Times (yes, they have a dance critic on staff), who quickly fired off a rambling screed blaming racism, sexism, and ageism for Spicer’s continued existence. The piece whined that Nancy Wilson, “a black grandmother who possesses and an undeniable theatrical presence,” was eliminated first when it should have been Sean. That was before I watched, so I’m not sure how Spicer could dance worse than a 75-year-old grandmother, or how a “theatrical presence” has any impact on a TV dance show, but clearly that’s not what the complaints are about.

While the leftists hate Sean Spicer, Republicans are loving sticking a thumb in their eye by voting to keep him on the show. The longer he’s on, the more money he earns, and earning money is something they’ve tried to deny him the ability to do. It’s win-win.

How awesome, and how hilarious, would it be if Sean Spicer won the whole thing? For all the complaining about the voting being rigged by having the president tweet in support of Sean, they created the rules and encourage the public to vote. So vote!

I’m not proud of watching this cheesy reality show last Monday, but I’m going to watch it again. And I’m going to vote again, 20 times, all for Sean Spicer. Even if he falls flat on his back, refuses to move while eating a sandwich in protest when he’s supposed to be dancing, he’s got my vote. Why? Because to hell with the left, that’s why.

Thank you sir for your service.

Have to admit that I made this suggestion to my wife last night, despite the fact that we don’t care for or watch, DWTS. I realize that it would be unfair to those who enjoy the program on its merits.

Do it. And watch ‘them’ change the rules, the way they changed the Whistleblower statute to allow secondhand knowledge, they way they want to change the number of justices on the SC, the way they would abolish the Electoral College.

How to vote for Sean Spicer:

• Cast another 10 votes by going to abc.com and clicking on the DWTS link. You must register an email address, so perhaps use a dummy.

• You can vote only on Mondays between 8pm to ~9:45pm Eastern time. Voting closes after the final dance and as the show goes to its last commercial break.

• Supporters in the Mountain and Pacific time zones must vote blind before the show airs, but that really makes no difference.

I guess I need to start watching this...… so the number for him changes every week? Can someone fall on the sword for all of us and watch it then post what number we need to call/text to vote for him? If we all watch it, then that boosts their “viewing” audience and I’d prefer to not do that but want to boost Sean.

My wife and I have been voting for Spicer since the first week. Monday night between us we cast 40 votes for Sean. That is the most allowed for two people. It is a referendum on Trump and a way to fight back against Hollywood. Spicer is by far the worst dancer. We giggle as Sean is announced safe for another week and the looks on the host and judges face is priceless. Tom Bergeron even before the show began back a few months ago was pissed they had a Trump person in the lineup. I can’t wait until next week to vote again. I vote right at 8 pm and I don’t care if he falls flat on his face or forgets the dance completely. Some of the most fun you can have pissing a lib off.

I don’t watch but I’ll be voting for Sean. I want to see the liberal heads explode.

Every time there’s an elimination, I read the posts online, just for laughs. “So-and-so should not of (sic) went home! Sean Spicer should of went (sic) home instead! This is just a popularity contest! All those Republicans must be voting! I’m never watching this show again!” It’s very satisfying chuckling at their meltdowns. Makes me tempted to throw some votes to Spicer myself.

OK, I’ll bite. What else am I going to do, watch those woke twits on Monday Night Football?

Got busy last Monday night and didn’t have time.

I don't believe liberals are going to let this go unchallenged.

Time will tell how this plays out.