What evidence does Sampson have that Biden does not?

Baden has much more info. He did a lot more than the NY ME did. Imaging the broken neck bones for one. The ME was sweeping under the rug.

Well a pig just flew past my window, I’m agreeing with that @hole De Blasio about something.

All the cameras being oops! turned off or not functioning, on such a high profile, purported “suicide risk” that just about everyone suspected would be killed somehow? Weird autopsy results not particularly consistent with reported cause of death?

He was killed. Get to the bottom of it, let the chips fall where they may.

3 posted on 10/31/2019 10:22:51 PM PDT by RegulatorCountry
[ Post Reply | Private Reply | To 1 | View Replies]
To: RegulatorCountry; LesbianThespianGymnasticMidget
One could use the Epstein incident to argue that armed resistance to "law enforcement authority" is actually self-defense.

Jepstein's final gift to the peasantry.

Dr. Baden just made it onto the Clinton’s enemy’s list.

How about Seth Rich?

Played ya’ll back in the day in HS football playoffs 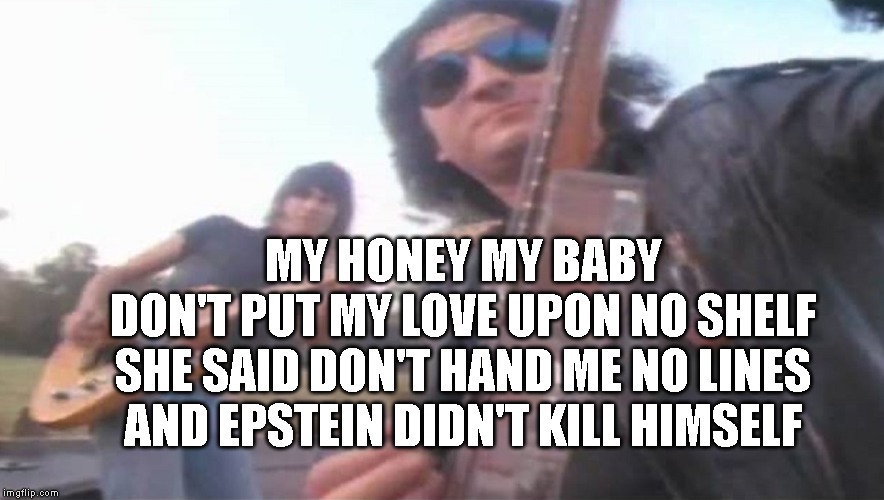 Obviously he is trying to get in front of information that we all know exists.

That “official story” is hard to swallow too.

There was a ton of evidence proving Vince Foster was arkancided as opposed to suicided. Same result.

People who want to understand what really happened, could be inviting Arkancide upon themselves.

13 posted on 10/31/2019 10:47:14 PM PDT by Mark17 (Once saved, always saved. I do not care if some do not like that. It will NEVER be my problem)
[ Post Reply | Private Reply | To 1 | View Replies]
To: ding_dong_daddy_from_dumas
New York City Chief Medical Examiner Barbara Sampson quickly responded, saying she stands “firmly” behind her determination that Epstein’s death in August was a hanging by suicide..

”Hanging by suicide?” Wouldn’t that be “suicide by hanging”?

Is this a direct quote from the ME or is it the journalist who is an ignoramus?

Hillary just placed a call to the operative that handled Seth Rich...

Never, EVER believe the “official story”.

Yet anytime someone questions the “official story”, they are labeled a conspiracy nut.

Better to be a conspiracy nut than a government stooge.

Well, Mr Wilheim (or whatever your name is) If you hadn’t been out jousting with presidential primary campaign windmills, you might have had a chance to stand a watch over Jeffrey yourself.

Did you consider the possibility that he’s NOT really dead, but squirreled away in a safe house somewhere???

What’s surprising to me is that there is anyone on this earth who considers it possible that Epstein DID commit suicide. As soon as he was arrested, a lot of people were counting the hours until he showed up dead. What a coincidence!

Guess what, everybody - the world we live in is run by devil-worshiping pedophiles. Epstein didn’t kill himself. Vince Foster didn’t kill himself. Seth Rich wasn’t killed by a mugger, and none of us knows even now why dozens of people were gunned down from a hotel in Las Vegas. Sleep tight.

"I wonder what local Democrat had the connections to arrange the hit inside the prison? Whoops, I mean, what quid pro quo was there from HIllary. Whoops, that is...."