At a news conference in Kyiv on Friday, Ukraine’s newly appointed top prosecutor announced a sweeping review of past corruption investigations that had been either shut down or split up. Fifteen of those cases, according to an official press release, involve the founder of the Ukrainian gas firm Burisma.

Former Vice President Joe Biden’s son Hunter was appointed to Burisma’s board in 2014, while his father was leading policy on Ukraine during the Obama administration.

The audit of earlier corruption probes follows a promise Ukrainian President Volodymyr Zelenskiy made to President Trump in a July 25 phone conversation: that a new prosecutor general would look into the closing of an investigation into Burisma’s practices.

Ukraine might appear to be bowing to pressure from Trump, who lifted his previously unannounced two-month hold on nearly $400 million in security assistance for Ukraine on Sept. 11. Earlier this week, the U.S. State Department gave the green light for Congress to consider selling 150 Javelin anti-tank missiles worth nearly $40 million to Ukraine. Zelenskiy had mentioned his desire to acquire those weapons, which are intended to counter Russian-backed separatists in eastern Ukraine, in his phone call with Trump.

THIS JUST IN: His fund-raising is in the sewer, but Biden has $6 million dollars for campaign ads? Did he borrow it from his son?

Obama’s wondering the same thing (cackle)——he always suspected Hunter was holding out on them in the Ukrainian deal.

Hunter had(s) a very expensive cocaine habit when he supposedly got a paltry $3 million from Burisma -— to be split three ways.

But Obama knew IMF had given Ukraine $5 billion.......which went missing......
and was being investigated by the same prosecutor looking into Hunter. Quelle “coincidence.” Non?

The corruption-seeking prosecutor got fired when Joe Biden stepped in to defend his son soon as the checks cleared......

In other words, President Trump is giving them assurance that they can once again pursue the Biden-associated corruption probe without fear of blackmail. 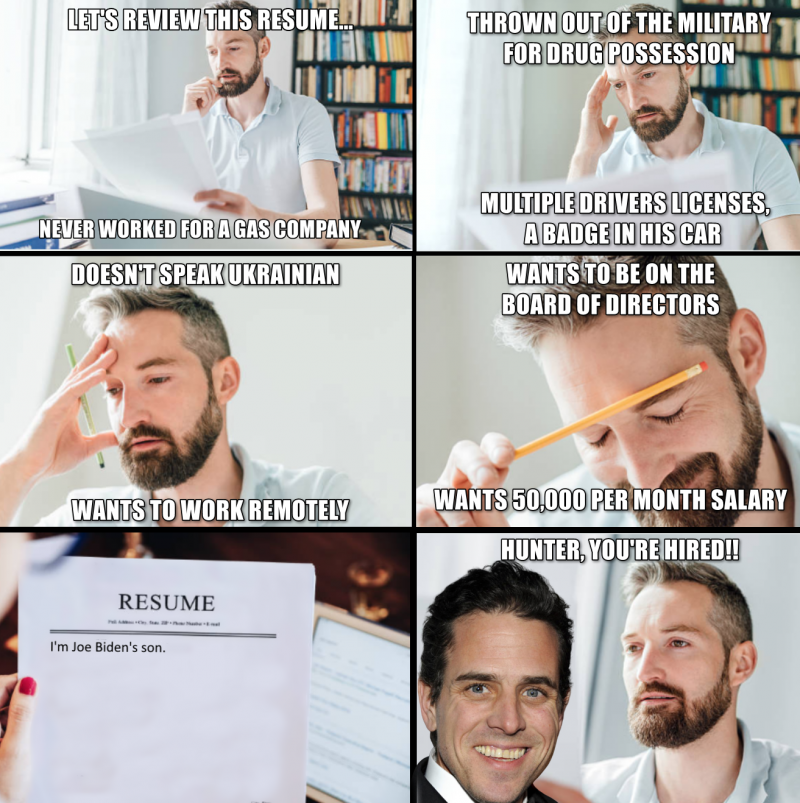 The Biden Family
>
>
> In 2017, Joe Biden’s niece, Caroline Biden, stole $100,000 through a
> credit card scam, aka, GRAND LARCENY, was able to cut a deal with
> DEMOCRAT NY prosecutors and got off scott free without jail time or
> probation. This was her second arrest. She was able to deal her way
> out of that one too. She has also been to rehab numerous times.
>
> https://nypost.com/2017/06/09/joe-bidens-niece-dodges-jail-after-100k-credit-card-scam/
>
> Biden’s son, Hunter Biden, was kicked out of the Navy for failing a
> cocaine drug test. More: HOW DID HE EVER GET A Naval Officers direct
> COMMISSION? Daddy fixed it!
>
> https://www.nbcnews.com/news/us-news/joe-bidens-son-hunter-kicked-out-navy-cocaine-n227811
>
> Then he divorced his wife, mother of his three daughters, after a year
> long affair, to marry his brother’s widow. WHO DOES THAT?


However, the marriage never took place.

>
> Over the course of the divorce, Hunter drained hundreds of thousands
> of dollars from the couple’s assets by “spending extravagantly on his
> own interests (including drugs, alcohol, prostitutes, strip clubs and
> gifts for women with whom he has sexual relations), while leaving the
> family with no funds to pay legitimate bills. It actually was worse
> than that, all outlined here:
>
> https://www.delawareonline.com/story/news/2017/03/02/kathleen-biden-files-divorce-hunter/98638454/
>
> And this is all on top of the BILLIONS his father dubiously arranged
> for him from communist China and Ukraine.
>
> https://nypost.com/2018/03/15/inside-the-shady-private-equity-firm-run-by-kerry-and-bidens-kids/
>
> Biden ’s daughter with Jill, Ashley Biden Krein, has been arrested
> several times for drug charges. While he was Veep, she was videoed
> snorting cocaine but the news media decided to not to publish the
> video. She hid out in the Veep Delaware home for a week or so until
> things calmed down.
>
> https://nypost.com/2009/03/30/parties-pot-in-ashley-bidens-past/
>
> Okay…..all God’s children got problems…but damnation, what if these
> things had happened to the Trump children???? The Trump kids are
> truly beyond reproach. Biden has a passel of miscreants. But the
> Republicans are not interested in subpoenaing all of the Biden
> children bank and credit card accounts, are they? Why haven’t we heard
> any of this from the networks, or read it in the “great” national
> newspapers?
>
> Nothing to see here?... just move along? …….Really? NO, LET’S PASS
> THIS ONE ON!!!!

When @realDonaldTrump questions anyone about corruption, even foreign leaders, he is conducting a 1A Free Press protected activity.

SCOTUS ruled that press freedoms apply to anyone, including someone publishing investigation results on Twitter. So they CAN’T impeach or even pass any laws to impede such activities.

And besides, wouldn’t you all love to see the media meltdown if Trump used this legal theory to defend his inquiries!

I think he’d be on sound legal ground here, as the universal application of press freedoms to every citizen is a well established legal precedent, which is why there are so many First Amendment Auditors on YouTube now, daring anyone to try and stop them from filming in public or from any location where they are allowed to be.

Can’t wait to see what Zelenskiy and his men turn up ...

The phone lines are burning up between US Pols calling in every favor from every corner of the earth to PRESSURE the Ukraine to stop the probe.

I am plenty damn sure NONE of us were EVER arrested, or charged with drug charges, etc.

Each of us was self-employed, and one of us had 65 employees at his company.

Having it get out, probably.

But I’m sure he was bragging to a room full of friends, cronies, and yes-men. He wasn’t in any way hesitant about it. He was telling a big ol’ Joe Biden war story to an appreciative audience and he was telling it with gusto. His continuing mistake is that he really thinks he’s that popular outside of the room, too.

Investigations are a good thing that way. If you are cleared, da woild is your erster, and if not, an elephant is in your pajamas.

Why, look at what being investigated by Mueller has done for Trump. Now the MSM and the DOP goes nuts every time he makes a phone call. Which gives him power over them, but they’re too stupid to cop that. Like Groucho with Margaret Dumont, while Rudy is Chico, and Durham is Harpo.