RUSH: Something else happened today. This is the reason you love Trump. During that press gaggle when he’s on the way to Marine One, the helicopter, to catch a plane to head down to The Villages here in Florida, he said, “You know, it’s not just Ukraine. The Chinese should be looking into Joe Biden too! I mean, there’s $1.5 billion of funny money there.

“The Chinese government ought to be looking into the Bidens.” Of course, the Washington media and everybody said, “Grab me the vapors! Oh, my God. Oh, my God.” Now the headlines are, “Trump is recruiting the Chinese! Trump is so bad! He asked the Ukrainians to do his dirty work, and that’s not enough. Now he’s asking the ChiComs to do his dirty work!” This president, the point is, will not be intimidated. Whatever it is that upsets them, he doubles down on it, and gives ’em another dose of it while telling the truth.

RUSH: Let me have the president saying this stuff for you, because the Washington establishment is going nuts. They’re going nuts! “How could he do this?” But this is the stuff he does that just coalesces his support with his voters and his base. This is the stuff he does that they love. This is the pushback. This is the real guy who says what he really thinks unfiltered, that makes Trump so approachable and likable to so many people. So he’s on the White House lawn making his way to Marine One, the helicopter, for a trip down to Florida.

You gotta think that if they actually start going after all the graft in Washington, it’ll be like shooting fish in a barrel. Hillary may have elevated it to unprecedented levels, but it seems they all had their piece of the pie.

Also-When talking to the Russian Molotov after the Tehran conference... what ever Truman said certainly offended that guy!

Molotov said: “I’ve never been spoken to like that in my life!”

Ah, young grasshopper, I see you still have a lot to learn. My suggestion would be to read some of the other comments on this thread that discuss the media being the primary enemy. They are no more gullible, punked, surprise, shocked or dismayed that any professional trained actor. They are enemy combatants who are poised to invent, attack, misstate and lie to further their agenda. If Trump didn't actually say something, they'd merely invent something for the day's news cycle.

Now for a little backstory: the reason the press is the enemy is because the families who own the 6 primary media companies also own the banks which control the Fed. The prize they have in mind is complete control of the US political economy, along with military and other associated state apparatus, in order to achieve their quest for complete global power. In this hierarchy, uniparty operatives are just cheap hirelings paid (bribed) to carry out key initiatives through "legal" political processes. After all, it's all about "consent of the governed" - a majority of illegals granted voting power will do the deed.

However. unlike many others on this board, I don't have a problem with their objectives. After all, life is merely competition over scarce resources. So, I don't blame them - it's like the frog and the scorpion - globalists gotta be globaling. That being said, who I do accuse of cowardice are patriots and their so-called leaders who don't recognize the existential peril, or hope to survive in order to gain positions of preferred pet serfs.

The solution is to look past the (bad) acting and focus on the big picture: who's gonna control the US? The people or the satanists? The chattering monkeys are just there to intentionally create as great a diversion as possible. Look, squirrel!

What we need to be taking is state offices like Secretary of State and legislatures, and local government. We’re getting our lunch eaten in the positions that control the bureaucracies at the state and local levels. And when we get that power, we need to use it, to get the bastards out of the bureaucracies and administrative positions. The Dems have understood the power of non legislative authority too well.

He was not counting NY, CA and NJ

We need to stop all immigration for 50 years!!! That is what is killing us.

The IRS has a reputation for not fooling around when folks break the law. This will be a good chance to see how they treat a Black person who is also a Democrat. 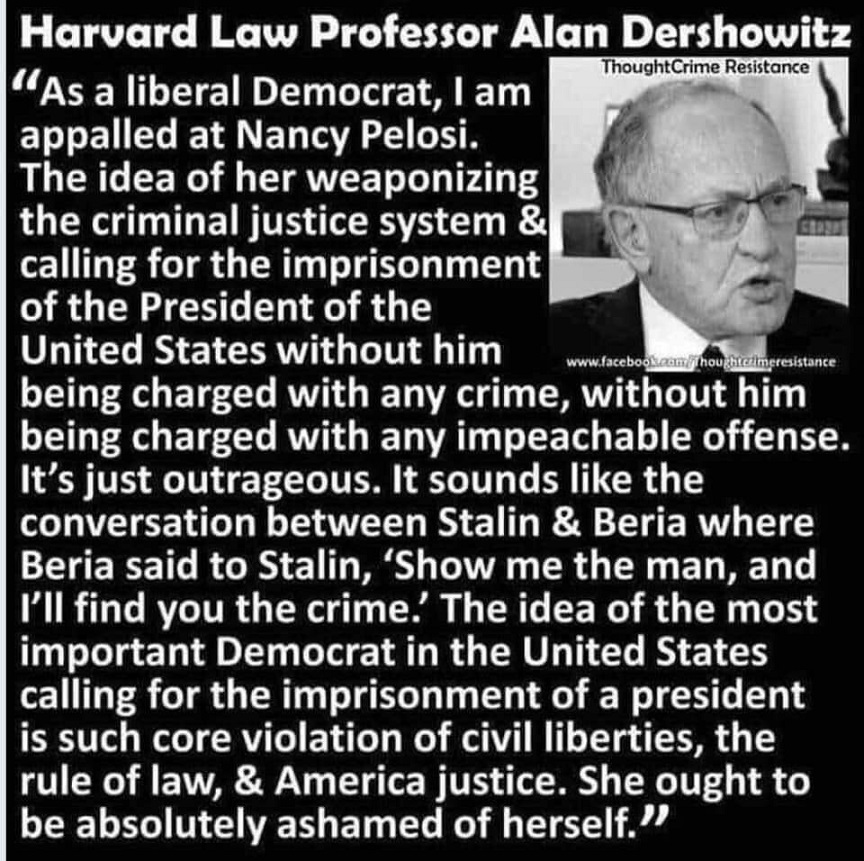 Oh for the Lord's sake Dershowitz, even you can see Pelosi should be removed from the Speaker-ship.....shame? Pelosi doesn't know the word.....she should tremble at her use of the word prayer...

32 posted on 10/04/2019 10:38:41 AM PDT by yoe
[ Post Reply | Private Reply | To 1 | View Replies]
To: struggle
The best thing about that would be the coattails.
My thoughts as well, which is why I was Tweeting President Trump on a weekly basis to go to California and other West Coast states to embolden the "forgotten" conservatives there to vote in the down-ticket candidates.

If the GOP took the House and Senate, we might get term limits, a balanced budget bill, and entitlement reforms.
Ah, perchance to dream. :-)