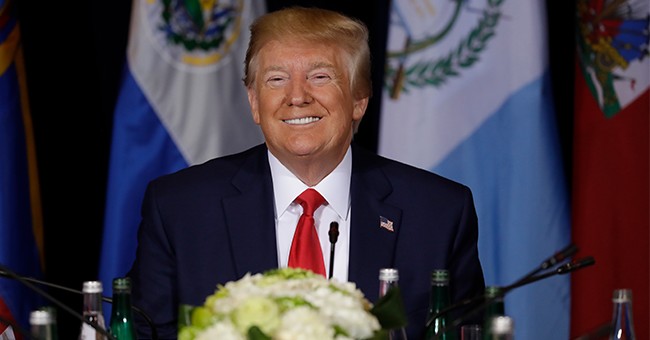 The Democrats are experiencing the giddy delight of having finally summoned up the stones to push the big red “IMPEACHMENT!” button. Their tawdry joy will pass. It’s a dumb idea, and they will soon regret it. This sorry scenario brings to mind Napoleon’s apocryphal advice to never interrupt your enemy when he, she or xe is making a mistake, and if the cheesy performance art piece that is this bogus scandal wasn’t so poisonous to our body politic, it would be hilarious.

Right now, the Dems are thrilled because they’re finally free of the tyranny of fairness and honesty and coherence, and they can indulge their deepest fantasies of frog-marching The Donald out of the Oval Office, to be replaced with Felonia Milhous von Pantsuit – wait, that’s not right. Why, that’s not right at all. They would replace Donald Trump with…Mike Pence, who will probably do the same things that have made Trump so successful without all the tweeting.

They have not thought this through. The Democrats are basically the proverbial dog that chases the car and finally catches it, then thinks, in fluent Terrier, “Okay, what the hell do I do now?” Only this analogy breaks down because dogs are cool. So are cars, except Priuses packing “COEXIST” or faded “I’m With Her” bumper stickers. In contrast, all Democrats are lame.

What is the plan here? They seem to be making it up as they stagger along. They latched onto this Ukraine thing about Bolivia Boy Biden and just went with it, not stopping to consider that outside their perverted coastal blue enclaves, people are going to look at him and think not that he’s the innocent victim of BAD ORANGE MAN but that he’s a crack-huffing, sibling widow-diddling weirdo.

And regular people will see that.

This impeachment idea is bound to bite them in the Schumer because it’s just so dumb that it can’t possibly resonate with normal people. I do a fair bit of media, and one hostile radio caller was especially interesting. I listed many of Snortie’s myriad failings – I don’t remember if I brought up the crack pipe he left in a rental car or not – then asked her if she was bothered by the fact that this guy who has probably spent less time in Ukraine than I have (I did four trips there training their Army) and speaks less of the language than I do (I can order vodka – wait, I bet Boy Biden can too) got himself a $50K a moon sinecure on an oligarch’s board while daddy happened to be the veep.

All right, normal people look at this situation and think, at best, “That’s sorta shady.” You cannot objectively assess this scenario and believe, “It’s totally normal. I’m sure that when he’s not face-diving into a towering heap of Medellin go-powder, Hunter probably brings a lot to the table that has nothing to do with Pappy Joe being the vice-president.”

The only people who actually believe this are, to use the clinical term, nuts. They make up a small but loud contingent. The people behind this exercise in futility are mostly the cynical libs online and in DC who will play along with what they know is a joke hoping they can undo 2016. So do the cruise-shilling Fredocon hacks of Conservative, Inc., who are eager to sign on and shed their dignity publicly – they usually only do that behind closed doors since, as Ace of Spades teaches, the shame is part of the kink – in order to try to salvage their tawdry Swamp status.

But to everyone else, this is just stupid. We’re supposed to be outraged that Trump (not really, but go with it) tried to have his lawyers dig up dirt on his political opponents, that he consulted with foreign governments to do so, that he used the power of his office to influence the election? Wasn’t that exactly how we got Russiagate? So, basically, when the Dems do it, it’s a crucial quest for justice and when Trump does it OMIGOSH THE NORMS THEY ARE BROKEN!

The Dems are going to flunk out of the Electoral College again.

Impeachment is all fun and games for now. Schiff is in the spotlight and loving it. The media is collectively wetting itself. And the House is going to eventually vote 218 to 217 – Nancy will give as many purples a pass as she can – to pull the trigger. And then it will go over to the Murder Turtle’s lair and the first thing that Senate Majority Leader McConnell will do is issue a subpoena to Hunter Biden to come chat at the trial. That will be fun.

Hey, Gropey Joe’s snort-unate son might actually show up if the invitation comes from someone nicknamed Cocaine Mitch.

3 posted on 10/03/2019 3:56:01 AM PDT by thesearethetimes... (Had I brought Christ with me, the outcome would have been different. Dr.Eric Cunningham)
[ Post Reply | Private Reply | To 1 | View Replies]
To: All
Screwball Schiff reading from "Democraps' Impeachment Playbook" warns that resistance to Congress’
demands counts as “evidence” of obstruction of justice, and warrants another impeachment charge.

Balderdash ..... pushback is NOT obstruction. Trump has a constitutional right to defend hmself.

Stomping on Trump's civil rights ..... trying to use pushback for impeachment.....only suggests they're out of options.

4 posted on 10/03/2019 3:56:47 AM PDT by Liz (Our side has 8 trillion bullets; the other side doesn't know which bathroom to use.)
[ Post Reply | Private Reply | To 1 | View Replies]
To: All
Shirt-sighted Democraps lurched into the Ukraine/Biden thingy not stopping to consider that outside
Deep State's blue enclaves of perversion, voting America looks at Hunter Biden......not as an innocent victim.....
but as a crack-addicted, widow-diddling sex maniac......a ne'er-do well living large off his White Privilege.

Article from People magazine. Hunter has now made it to the gossip magazines. The video is about Hunter’s affair with his brother’s widow.

Trump has a constitutional right to defend hmself.

“Thanks Hunter-- my bank statement arrived. And Michelle loved the diamond from China you sent over.”

9 posted on 10/03/2019 4:33:34 AM PDT by Liz (Our side has 8 trillion b...No to forgt Hullets; the other side doesn't know which bathroom to use.)
[ Post Reply | Private Reply | To 6 | View Replies]
To: Kaslin
The Democrats are blinded by blind psychotic rage! All they can think about is anger and HATE! They are consumed by HATE!

--How they HATE Trump

--how they HATE anyone who supports Trump

--how they HATE the 2016 election results

-how they HATE anything that gets in their way

--how they HATE anyone who won't conform to their groupthink

--how they HATE the LIGHT OF TRUTH!

This guy is brilliant! So many great lines.

Their tawdry joy will pass. It’s a dumb idea, and they will soon regret it.”

Yes and the clouds will part and the sun will shine because evil, vulgar, irrational people will see the error of their was and shuffle off defeated. THEY’RE SHAMELESS LIARS! THEY AREN’T GOING ANYWHERE! THEY ARE REWARDED EVERYTIME THEY ADVANCE AN ILLEGALITY OR LIE!

<>The Dems are going to flunk out of the Electoral College again.<>

That’s the best line among many great lines.