The Democratic Party of Texas is laying out its plans to end decades of Republican dominance in the state, touting a substantial voter registration and turnout effort to create a blue wave of elected officials in 2020. It released its planning document Monday morning, the same week as Houston's Democratic presidential debates.

The party set a goal of registering 2.6 million Texans to vote, boosting turnout in suburban areas and putting 1,000 field organizers on the ground.

In addition to focusing on signing up unregistered voters and increasing turnout in growingly diverse as well as reliably Democratic areas, the plan also includes a focus on voter protection. A year-round hotline will be put in place to report any cases of voting suppression, and Texas Democrats have teamed with Democratic lawyers to be ready to fight those cases.

A crux of the plan is the state party's voter registration effort, which it hopes to achieve through state-coordinated campaigns with counties, a big increase in staffing and a direct mail effort including 1.5 million mail applications. In its analysis of the 2.6 million unregistered Texans, compiled from records from the Texas secretary of state, Texas Democrats identified a number of young, diverse populations in fluid metro areas.

"Five of America's 25 fastest growing cities are in Texas," Walker wrote in the plan. "These five cities are expected to drive more than 500,000 people into Texas over the next two years, up to 300,000 registered voters. We know many of these people are coming from liberal cities..."

Nope..nope..not 50/50...no way. I am in Deep South Texas. Almost all my Hispanic neighbors and friends love Trump and vote Republican. This turning Texas blue story is fake news. Won’t happen.

22 posted on 09/09/2019 1:22:43 PM PDT by alamogal (Give em Hell Donald!)
[ Post Reply | Private Reply | To 19 | View Replies]
To: Meatspace
You will see it within the next couple of cycles. Texas will be California without the movie stars. The rest of the country will follow within two generations. We will be majority Hispanic well before the end of the century.

Or we can control our borders, but we clearly will not do that.

They have to say this to get the drooling half wits who support them to keep sending money. 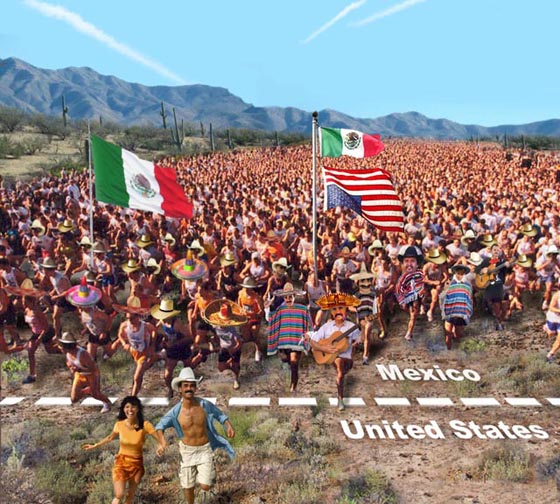 “But in 2024 and beyond, will Republican candidates be able to retain such growth among minority voters? “

The cynic in me says I’ll be 67 in 2024, and I can probably withstand the communist onslaught once President Trump is done.

The faint and fading optimist in me hopes that for the good of the country, there is a cultural shift, and minorities see the value in conservatism.

We, as conservatives, ceded the educational system to the left, in favor of doing what conservatives do, taking care of ourselves.

The sad reality is, the left exists for a cause. They are easily led, and will flock to a cause for the feelings, they don’t need reason.

They won’t succeed. This time. But there is something to be said for the fact that the Democrats are relentless in trying to turn Texas blue. They will probably succeed, eventually. Republicans should be just as relentless in California and New York.

“Fraud”? You should know.

I am in Houston, and it looks a lot different here. Republicans used to win the county-wide races in Harris County. Now Democrats are sweeping those races. And these are left-wing Democrats, not moderates. Politically, Houston, Austin, Dallas, and San Antonio now have a lot more in common with liberal cities elsewhere in the country than they have with rural Texas. Fort Worth is probably not far behind. The politicians winning elections in these cities look a lot more like Beto O'Rourke and Julian Castro than like old-fashioned Texas blue dog Democrats.

I think that is a lot more indicative of the overall situation than what is going on in Deep South Texas. About two thirds of Texas's population lives in metropolitan Houston, DFW, Austin, and San Antonio, and that percentage is growing as those places grow more liberal.

The Democrats are about to pull out the zombies and foreign invaders.

Its sad.
Texas has a Super Majority and all Rove Co did with it is attack the base who helped him get it.
Oh and also allow Obama to open the flood gates with Bush and Rove’s permission.

I’m sure the plan has to do with open borders, so we can have more Hispanics voting in our elections.

In 30 years or sooner, Texas demographics is going to look similar to California’s.

And that is when the country is going to go to hell.

I totally agree. Living in Lakeway outside of Austin, the influx of people from california is astounding. Texas is going to go blue. Sooner than later. IMO.

Civil war starts the day the Democrats claim victory in a Presidential race. Doesn’t matter how far in the future it is, they can never be allowed to rule again.

I’ve been saying it for a few weeks now, and I’ll repeat it: This time next year, Texas will be in play. Ted Cruz barely squeaking by O’Rourke was a portend. I’m not even confident that absent voter fraud, Texas wouldn’t be close anyway. It’s frightening just how every large city is solidly blue, entrenched and immovable.

Can We trade Bendover Rove to California for a player to be named later?

We need to register new voters too. but ALSO & MORESO, need to convince already registered voters to VOTE REPUBLICAN, EVEN IF THEYVE BEEN LIFELONG DEMOCRATS.

A vote for a Democrat is a vote AGAINST their own best interests, AGAINST America, AGAINST a booming economy.