Democrat presidential candidate Bernie Sanders announced this weekend he will cut staffers' hours so that they can effectively be paid a $15-an-hour minimum wage, prompting mockery from critics who say the move is more evidence that Sanders' plan to raise the national minimum wage is hypocritical and would only lead to less work and more unemployment.

The Washington Post first reported last Thursday that Sanders' field staffers were upset that Sanders championed a $15 minimum wage on the campaign trail, and made headlines for railing against major corporations who pay "starvation wages" -- even as his own employees made "poverty wages."

In response, Sanders told The Des Moines Register he was "very proud" to lead the first major presidential campaign with unionized workers, but also "bothered" that news of the internal strife had spilled into the media.

The self-described socialist candidate said junior field organizers earn roughly $36,000 per year in salary, with employer-paid health care and sick leave. But he acknowledged that their salary can effectively dip below $15 per hour if staffers work much more than 40 hours per week, which is common on presidential campaigns.

The solution is to "limit the number of hours staffers work to 42 or 43 each week to ensure they’re making the equivalent of $15 an hour," he told the Register's Brianne Pfannenstiel. 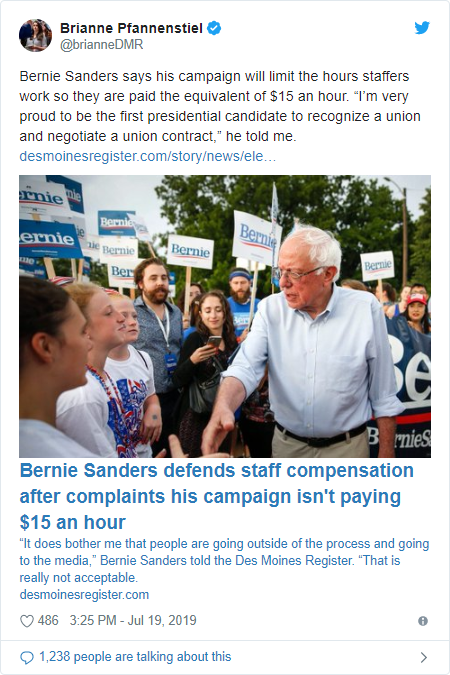 So same pay for fewer hours. Want to bet the unwritten rule there will be to work overtime for free?

No, of course not. Nod nod wink wink.

Bernie is a smart man. But it doesn’t seem like he knows how to play chess.

These are seasonal jobs. None of them should be making $15 an hour.

Love it when a nasty dog bites its owner in the ass...

If you have ever worked on a campaign there is no such thing as a 8 hour day. Bernie does not want to pay any overtime.

Also most campaigns have a lot of volunteers along with paid staff.

Although in the last 30 years the paid staff has grown and everyone wants a check. Hillary had a campaign staff in New York of over 1000 and I guess they were all being paid.

Cant raise the prices of a product he doesn’t have

Once again, the millionaires and billionaires are not willing to open up their wallets to share their ill gotten wealth with the downtrodden peasants.

Shame on you, Bernie.

what is important to leftards is that it sounds good, not whether is actually works.

You mean like any economist knows you either pick the wage or the number of workers but not both. 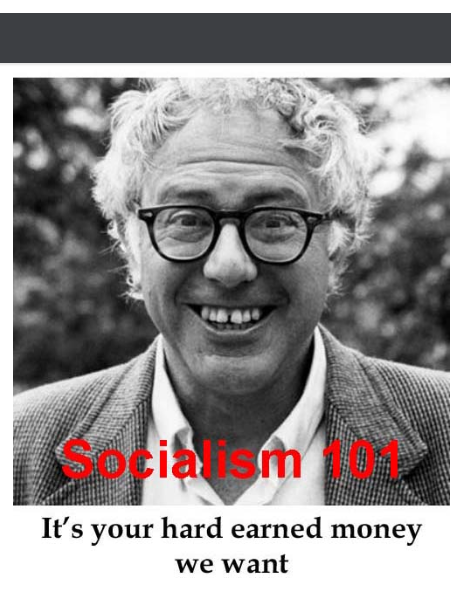 Awwwwwwww what’s a matter Bernie?? The math suddenly didn’t work out as soon as it applied to you??

You’re as phony as a Hillary Clinton promise.

Sit down, you foddering old moron. Your 15 minutes are up.

If you can’t run you’re own campaign.....how do you think you can run the country?

So, their pay actually remains the same.

Exactly whats happening in the real world where states have a $15 law.