A former Secret Service agent assigned to the Vice President Joe Biden residence claims that the Service often had to protect female agents from him. Speaking on the condition of anonymity, the agent asserted that, “We had to cancel the VP Christmas get together at the Vice President’s house because Biden would grope all of our wives and girlfriend’s asses.” The annual party was for agents and Navy personnel who were tasked with protecting the Biden family.

“He would mess with every single woman or teen. It was horrible,” the agent said.

According to the source, a Secret Service agent once got suspended for a week in 2009 for shoving Biden after he cupped his girlfriend’s breast while the couple was taking a photo with him. The situation got so heated, the source told Cassandra Fairbanks, that others had to step in to prevent the agent from hitting the then-Vice President.

Additionally, the agent claims that Biden would walk around the VP residence naked at night. “I mean, Stark naked… Weinstein level stuff,” he added.

He said that the men on duty would frequently stand in front of female agents and Navy women that were present “like a damn guardian.” On some occasions, they would make up reasons to get the women away from where he was.

The agent said he was specifically concerned about women in the Navy.

“They weren’t allowed to disobey him at all, but we’d take them away under pretend auspices,” the agent stated.

The official Vice Presidential residence is the Queen Anne style house at One Observatory Circle in Washington, DC, which is located on the northeast grounds of the U.S. Naval Observatory. The property is maintained and cared for by the service branch.

“Agents say that, whether at the vice president’s residence or at his home in Delaware, Biden has a habit of swimming in his pool nude,” Kessler wrote. “Female Secret Service agents find that offensive.”

Our source confirmed this sentiment, adding that “it was especially an issue at his Delaware house that he would go to every weekend.”

“He would only get naked when Jill was absent,” he added.

Biden has also long been criticized for his contact with women and girls in photos and videos, and was even referred to as “Creepy Uncle Joe Biden” by the Washington Post.

In a report from the Washington Examiner titled, ‘Joe Biden’s Woman Touching Habit,’ Byron York wrote that he has a tendency to be “particularly affectionate with women in business and social situations, like the 2013 Christmas party at which he embraced reporter Amie Parnes.”

The agent also worked under the Bush administration, and added that Vice President Dick Cheney “never grabbed any butts or breasts.”

We have reached out to a Biden spokeswoman for comment, but did not receive a response by time of publishing. 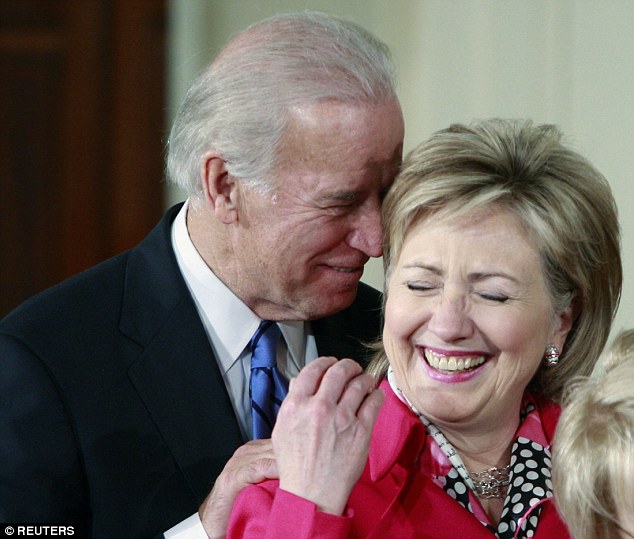 "I bet Bill didnt get you this hot."

If biden becomes the nominee, the media will fire up its propaganda machine and make us forget these facts about him.

He’s dirty, he’s inarticulate, he’s a plagiarist and a serial groper. Can the ‘rats present a better candidate? Doubtful.

Really? Ah, God, just the imagery of Creepy Joe swimming.. can’t even say it. Yuck. just yuck. Starting to wonder if simply running Biden is the Dems’ way of punishing the country for the unforgivable sin of rejecting Hillary in 2016, they know Joe probably can’t win but at the very least, they’ll gross us all out so much we’ll all be sick to our stomachs by late 2020.

He seems to have problems with impulse control, doesn’t he?

A friend of mine did vascular surgery—and he said that most people who had the same operation as Biden suffered some degree of impairment.

“an article based on anonymous sources has very little value.”

cnn makes a living on quoting anonymous sources. It’s about time that shoe was on the other foot for a change IMO.

Looks like he rubs his junk on her, too.

That’s what I’m thinking, the MSM’s fake news machine seems to rely alot on memory-holeing things that would disqualify any other candidate when their champion toes their line. And hoping there are enough idiots and-or imported illegal alien voters in the electorate to not notice.

“The DC Weinstein” would be a good nickname for Biden.

I can just hear the after ceremony conversation.......” mommy, remember when you told me to always come to you if a person touches my private areas? Well Mr. Biden touched me and I got really scared.” “Oh honey, he is your daddy’s boss and a really important person, even your uncle Joe, we are sure it was an accident so don’t tell anyone, ever.”

Holy sh— you’re right. Just when I thought it couldn’t get any nastier. It’s not even subtle when you catch it at the right angle. WTF??

Most people would mistake this behavior as “sexual”. It isn’t. It’s POWER. “Watch what I do to your girlfriend, wife, daughter, while you watch and can do nothing about it.” Which makes it even more disgusting.

There is not just smoke here, but Gateway Pundit is not a very credible source.

Yes, and Old Joe has a multi-million dollar estate on a private lake. Supposedly he’s not rich, so how did he buy that mansion? How did he pay for his other homes. Rumor in Delaware that MBNA and successor Bank of America had a (big) hand in that.

Don’t forget, he made Secret Service pay rent for protecting him. Dirty Joe is up to his neck in corruption.

Creepy Joe likes the smell of B.O. and cabbage? Who knew?

Poor child. Obviously uncomfortable as have been many persons to get too clost to gropin’ joe. Guess it’s good to be the king huh?

So much uggghhh with this creep. He openly gropes and traumatizes a defenseless little girl, swims buff clearly in the view of female Navy soldiers and Secret Service agents, and.. cozies up to Hillary in possibly the nastiest “kissy” photo imaginable. As if there wasn’t already enough to hate the Dems, media and Hollyweird for, them foisting this creep on us alone takes the cake.

True, true. Even worse since limousine liberals like Joe add the asinine virtue signalling on top of it. “I’m not only more powerful than you, I’m also less racist and more woke. Take that!”