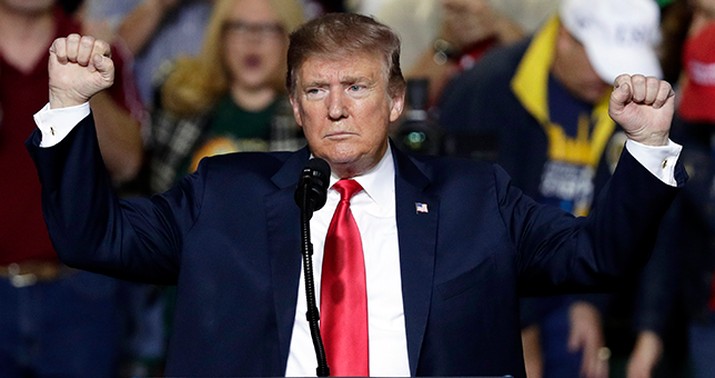 At 10 am ET today, Donald Trump will declare a national emergency in order to redirect funding from the Pentagon to the border wall. That will only account for about half of the additional funding Trump will claim above the $1.37 billion Congress finally appropriated for the project, however. ABC News reported last night that Trump will raid drug-war accounts to match those funds:

ABC News has learned the president plans to announce on Friday his intention to spend about $8 billion on the border wall with a mix of spending from Congressional appropriations approved Thursday night, executive action and an emergency declaration.

If $1.37 billion pays for 55 miles of the wall, as has been stated repeatedly this week, that puts the wall at around $25 million a mile. The Pentagon’s construction budget will pay for 140 more miles, and the combination of the drug-war accounts would pay for 124 miles. All told, the entire package would allow for the construction of 319 miles of wall.

That scope might be part of the problem Trump faces. It will take years to build that much steel-slat wall — even the manufacturing could take a couple of years, not to mention the transport and actual construction. Presumably the funds will get moved into a sequestered account of some sort, but that’s only one of the legal issues that will come up as Trump moves forward on his emergency declaration:

President Donald Trump’s decision to declare a national emergency in order to access funds Congress refused to appropriate for his border wall is set to unleash a furious legal war that could bog down the project for months or years.

Immigrant rights advocates, property rights activists, environmentalists, Democratic lawmakers and state officials are all loudly signaling plans for a hail of legal writs aimed at blocking the president from what they have denounced as an unconstitutional end-run around the usual budget process.

Trump does have precedent on his side — more than forty years of lazy Congresses failing to object to prior presidential emergency decrees, John Eastman argues. What’s so different about this one?

Some lawyers are already arguing that the inevitable border-wall litigation is an effort to impose a double standard on Trump, given that nearly 60 emergencies have been declared since President Gerald Ford signed the law in question four decades ago. The oldest one still on the books stems from Iran’s seizure of hostages at the U.S. Embassy in Tehran in 1979.

“From an originalist Constitution point of view, Congress probably shouldn’t have ever delegated this kind of power to the president in the first place, so they may have having second thoughts about having done that,” said John Eastman, a Chapman University law professor and former Justice Department official. “But the notion that this president shouldn’t be able to use powers that every other president has used, I think that’s just not a good use of the rule of law.” …

Josh Blackman, an associate law professor at the South Texas College of Law Houston, said the threshold for declaring an emergency was “broad” and “undefined,” putting Trump in a strong position legally.

“Congress basically said you can do it whenever you want whenever you think that national defense is at risk,” Blackman said. “And that’s a very broad and deferential standard.”

The problem Trump will face isn’t so much of an outright loss in the courts, but of attrition. Every border state will sue to stop the work with the possible exception of Texas. Every landowner who doesn’t want to have their property transferred through eminent domain will challenge the emergency declaration. So too will every activist group, perhaps especially environmentalists who have been challenging the installation of border barriers for years. Appellate courts might be inclined to consolidate these cases, but they also might not be so inclined.

By the time this all gets resolved, we might be past the next election. If Trump wins in 2020, then all we’re talking about is a delay. But if he loses, then all of this will have been a waste of time — unless Congress learns a lesson about handing off emergency powers to the executive branch and repeals that statute.

In the meantime, Trump can likely use at least half of the money he’ll claim to begin construction of 179 miles of wall. However, he’d better put aside some of that for the lawyers he’ll be paying for the next two years or more just to get the ground broken on the project.

“unless Congress learns a lesson about handing off emergency powers to the executive branch and repeals that statute.”

I.e., ABC acknowledges that the President has the authority, and the threatened lawsuits are frivolous. Apparently Congress and the courts didn’t learn a lesson after experiencing the “horror” 13-odd times under Obama.

Some sources are going to be harder than others to challenge, meanwhile he has the $1.4B and whatever he can avoid or win court challenges on to get started.

As it’s an emergency, Trump has NO obligation to halt construction in response to ‘Obama Judge’ injunctions. IF they win, then he can stop.

Time to get the bulldozers moving and arrest anyone trying to stop them.

These FN dirt bags in this country literally fight with us over a wall that would keep the animals from invading and drugs crime and murder at bay, unbelievable treasonous bastards