The Islamist terror group al-Shabaab has said it has killed five people including a Briton whom it accused of spying.

Three of the men publicly shot dead in al-Shabaab-controlled territory in Somalia were accused of spying for the US government and one for Somali authorities.

The fifth is thought to have been Mohammed Ahmed Mohamed, 32, a terrorism suspect who gave British authorities the slip in 2013 by cutting off his electronic tag, putting on a burqa and walking out of a west London mosque.

The al-Qaida-linked group routinely shoots people accused of being spies, though often these are simply fighters caught on the wrong side of factional disputes.

Foreign fighters are particularly vulnerable to the charge. One was Omar Hammami, an American from Alabama known as the rapping jihadist, who was killed in 2013.

In December last year, five men were tied to poles and shot, accused of spying for the Kenyan and Ethiopian governments.

Al-Shabaab... has been extorting starving people and recruiting hundreds of child soldiers and suicide bombers against their will as al-Shabaab grapples with a financial squeeze and lack of support. In recent months, the group has clashed with clan militias because of its efforts to conscript teenagers into its ranks...

A Somali security official said it was believed that Mohamed may have joined Islamic State, which has been active in Somalia but has failed to recruit more than a handful of followers... 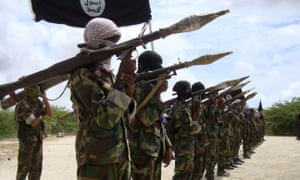 He beat the rap in the UK, fled to Somalia, and got executed by al-Shabaab. Gee, let me get the wet-vacc out for the pools of tears.

Omar Hammami, an American from Alabama known as the rapping jihadist....

?????...Alabama rapping jihadist...
must have a small exclusive following

I read the article. I didn’t see any British people mentioned.

In school, I was taught that global human population would be held in check by famine, disease, and war.

There needs to be a lot more concern for the fate of this dude than for Khashoggi..... /s

Islam is a disease.

I remember that.What an idiot and a dead one at that.