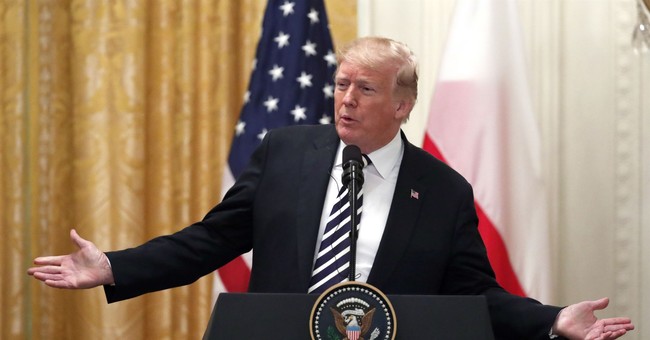 “I’m going to let the Senate handle that. They’ll make their decisions. They’ve been doing a good job and very professional. I’m just hearing a little bit about it because I’ve been with the president of Chile and were talking about some very important subjects. I’m sure it will all be very good. I guess the vote was a positive vote but there seems to be a delay. I’ll learn more about it as the day goes on. I just heard about it because we were together,” Trump said. "I’m going to rely on all the people, including Sen. Grassley who is doing a very good job. That is going to be a decision they are going to make and I suspect they’ll be making some decision soon whether to take a vote or do whatever else they want to do. I will be totally reliant on what Sen. Grassley and the group decides to do." When asked if he was considering a replacement for Kavanaugh, President Trump said "not even a little bit." No word yet from Majority Leader Mitch McConnell about how the vote will proceed.

This is powerful and good.

In other words, when he’s building a skyscraper and the contractor screws up, he doesn’t hire his own crew to go in and fix their mess. He allows them to do what they are required to do and also to lives with the consequences.

Also the names on the "Congressional Creep List"! For those unfamiliar with it, I heard on Kuhner (and confirmed with an internet search) that female staffers provide female new hires in Congress with a list (don't know if it's written or oral) of those congresscritters and aides that they would be well advised not to be alone with, whether in an office or conference room or elevator, because they can't or won't keep their hands to themselves!

I’m familiar with that story, but if its posting is intended to imply the reason for Flake’s behavior is ideological and/or political, you are over-thinking things.

It’s always been the money.

The only dinky fault I can find with it that hints it may be ‘shopped is no wedding ring.
Assuming DJT wears one ?

Actually, just did a quick image search and it appears he doesn’t wear one.

Which is Jeff Flake and the Never Trumper's objective.

I doubt think most conservatives are that stupid. Conservatives will move to punish Democrats and Republicans will end up with about 55 Senate seats.

“The president was very calm when answering. He is already two steps ahead of the Dems and their puppet Flake.”

Always been a strong supporter of the President BUT...his LUCK is going to give out with him seemly starting to slip more and more into a pattern of giving in on timelines and into the dems request. I know “give them enough rope” but...he keeps putting off releasing info we want and need to get that needs to be seen BEFORE the elections, keeps putting off dealing with the “coup” folks, is potentially giving away the SC appointment with delay after delay...just saying I know nothing...yes that is for sure....BUT...I hope his LUCK hold out cause if he loses either the house and/or senate he is toast!

LOL! KASICH??? For a “humble son of a postman”, he sure has an over-inflated opinion of himself. As if he could win! What a joke.

Thursday? This is Friday.

Well then, it is time for him to unleash the Kraken.

He probably had to pay a bunch of guys off.

Flake and Kasich would get about 0.3% of the Primary votes more than me, and I'll be sitting on the couch eating pizza and drinking beer during the campaign. Sasse might get the 2% Never Trump Republican votes, but he could kiss the rest of his somewhat promising career goodbye.

boooooooooooooooooooooooooooo....just saw more of this story on TV about TRUMP approves of the delay...bad decision...just wait and see all this sh*t 50 - 50 this all falls apart...just giving them time.

And when it does, who is to blame...repubs that NOW control BOTH sides of congress...and for sure won’t if the time the dems are being given cause this to sink!

Many in this area will just stay home!

Some say Flake will profit by million$ for this act.

I don’t see how that works. [campaign funds he gets to retire with?]

Can any body help?

Trump has at least a 6 year planning horizon.

The Trump Curse could drop a lot more #NeverTrump folks over that period of time.

Trump is largely on his own.

For having no real Congressional support he gets a lot done.

Yes but he just kneed his nominee in the groin.