So it took a special counsel to do the job of a entry level IRS agent?

In the meanwhile Hillary walks. Equal justice my rear-end.

Sessions will never touch his friends

“This is still in no way a “vindication” of the Mueller witch hunt.”

They couldn’t even get convictions on most of the completely unrelated tax charges on the sleazy all GOP establishment operative they foisted on to Trump’s campaign for a month or so.

Manafort helped elect Trump, the left is out for blood.

Has anyone seen Tony and John Podesta?

Obama and Hillary sell uranium to our enemies and nothin is done.

Manafort is lazy in doing his tax returns and they send him to the slammer.

Please pardon this great patriot Mr President ! This is a politically witch hunt and we all know it

All this does is point out the obvious double standard that exists in our “justice” system.

Trump isn’t firing Sessions.
And Sessions isn’t firing Rosenweasel
And Rosenweasel isn’t firing the seditious bastards in the FBI
and NONE of them are shutting down Mueller’s years-long witch hunt in an investigation WITHOUT A CRIME.

We’re IN CHARGE and the system is STILL allowed to carry on with all of its business-as-usual corruption! That’s what gets under my skin. I keep waiting for SOMEONE or SOMETHING to clean it out and it just doesn’t seem to happen. It’s always “oh, well... wait for THIS report” or “THAT report” or “Wait until after the election!” -— then it will be “Wait until after the Holidays!” then it will be “Wait until the new Congress is seated!” then a thousand other things - with “WAIT” being the key word in each one.

Come on, President Trump - DO SOMETHING.

Yet by rooting for Manafort to be judged not guilty, folks here are basically making it about Trump. They are playing right into the hands of the Trump haters.

Yep, didn’t help my confidence in his innocence when he went that route.

While it does bother me that Clinton and company haven’t been taken to task, I’m not convinced Manafort wasn’t guilty here.

If he evaded taxes and got caught, Trump shouldn’t pardon him.

Jurors have to file tax returns. They understand that Manafort needed to do that as well. If the evidence shows that he cheated on his taxes, then it probably wasn’t hard to find guilty on 5 counts.

Yep, neither does the charges against Michael Cohen. I mean what’s next, are they going to investigate Trumps limo driver for parking tickets?

I hope the judge sentences him to time served. When is sentencing?

I was unaware that Obama and Hillary were on trial in this case.

Who determines the sentence... judge or jury?

36 posted on 08/21/2018 1:54:56 PM PDT by Cementjungle
[ Post Reply | Private Reply | To 1 | View Replies]
To: CJ Wolf
How do you argue/defend against tax evasion that was plain as day? Put Manafort on the stand and claim ignorance? The government lawyers would make mincemeat out of him. Does not work in relation to the law (Especially if the subject is not related to illegally entering the United States which ignorance is excused by a lot of idiots in power and those that support them).

Al Capone got away with multiple murders/extortion/bootlegging/prostitution/gambling, etc..., but not tax evasion. There is no defense against that unless you want to simplify the process through the ballot box (Too many idiots vote for a convoluted system), wealthy enough to create a "charitable" foundation, or start the American Revolution: Part II.

“Should have mounted a defense.”

No kidding. I suspect that is the question he asking his defense team right now.

In what year was the tax and bank fraud committed?

39 posted on 08/21/2018 1:56:52 PM PDT by Jaded (Pope Francis? Not really a fan... miss the last guy who recognized how Islam spread... the sword.ag)
[ Post Reply | Private Reply | To 15 | View Replies]
To: detective; All
Earlier today in the Washington Post comments section as discussed by WMAL's Chris Plante on his morning show: 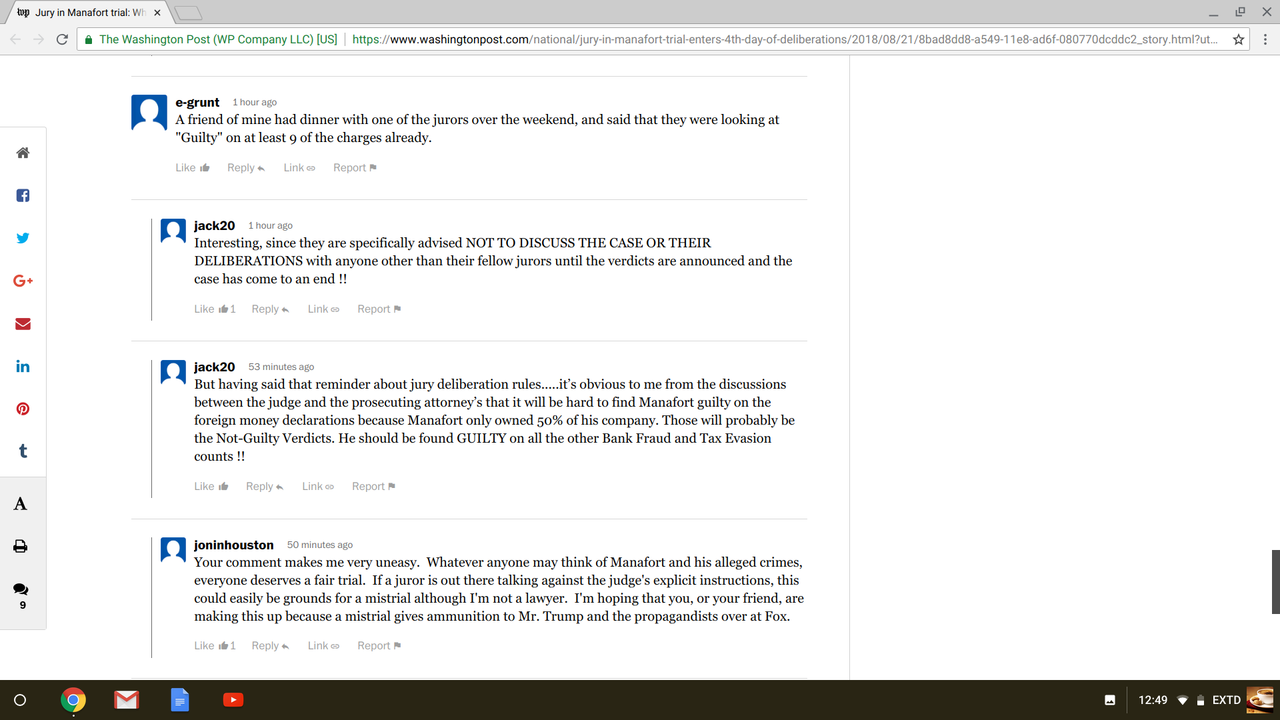