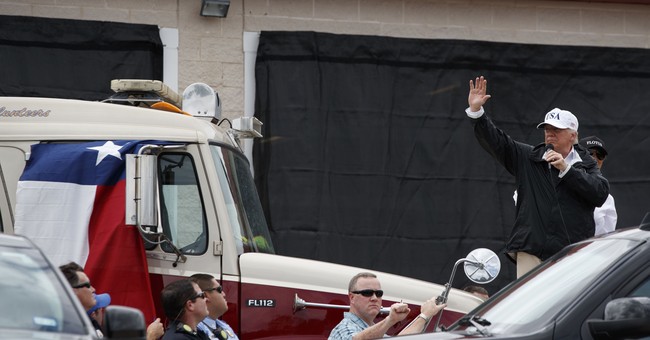 Before the disastrous storm hit the city, President George W. Bush was at his ranch in Crawford, Texas enjoying a four week vacation. On the day Hurricane Katrina smashed into the Mississippi coast, Bush took a brief break from his vacation to visit Phoenix, AZ to promote his Medicare prescription drug legislation. He also presented a cake and posed for pictures with U.S. Senator John McCain (R-AZ), who was celebrating his 69th birthday.

Incredibly, after the McCain visit, Bush went back to his ranch to continue his vacation for another two days. He did not return to Washington D.C. until August 31, a full two days after Hurricane Katrina devastated the Gulf Coast. In an infamous photo that captured his disengaged response to the storm, Bush was pictured looking at the hurricane destruction from his Air Force One window as he flew over the region before returning to the White House. Bush later realized that the photo was a “huge mistake” because it conveyed the impression he was “detached and uncaring.”

While Bush seemed disinterested, the response of FEMA was initially very slow and inadequate. Even though people were still dying and the world saw televised images of chaos at the Convention Center and flood victims being rescued from rooftops, no significant aid reached New Orleans until Friday September 2, four days after the hurricane hit.

At the time, FEMA was led by Michael Brown, a political appointee without any emergency management experience. Brown did a woeful job of preparing FEMA to tackle this unprecedented challenge. Unfortunately, at press event in Mobile, Alabama, as aid had still not arrived in most of New Orleans, Bush astonishingly praised the inept FEMA Director by claiming “Brownie, you’re doing a heck of a job.”

Of course, “Brownie” was a complete failure and was forced to resign on September 12, 2005, the day after President Bush made his first visit to New Orleans for an on-site inspection of the catastrophic damage.

After an initially weak federal government response, President Bush did make numerous visits to New Orleans and clearly displayed a true interest in the recovery of the city. However, a negative image was already cemented in the minds of Americans and President Bush never recovered politically. After Hurricane Katrina, his approval numbers collapsed and continued to be poor for the remainder of his presidency.

Almost 12 years later, another monster storm, Hurricane Harvey, hit the United States. This time, the federal government was ready. FEMA, which is now led by Brock Long, a component professional with 16 years of relevant experience, deployed over 9,000 emergency personnel to Texas. In the last week, local and state officials have been working closely with the Trump administration in all aspects of the response.

Instead of waiting almost two weeks to inspect the damage, President Donald Trump made his first visit to Texas while the hurricane was still in the state. His visit was well received by storm victims and he was given a hero’s welcome. While petty critics blasted the footwear of Melania Trump, the people of Texas were happy to see both the President and the First Lady.

In another display of the administration’s commitment to bolster recovery efforts, Vice President Mike Pence, along with several Trump cabinet officials, visited Texas on Thursday. On Saturday, President Trump will return to Texas, visiting visit the hardest hit area, Houston, as well as Lake Charles, Louisiana, which was also inundated with rain.

The administration is preparing an initial aid package of almost $6 billion for Harvey recovery. Understandably, full recovery will be incredibly expensive and take years of concerted determination, but, at least the storm victims know that their president is concerned and involved as they endeavor to rebuild.

Sadly, former President George W. Bush did not adequately convey that message to Hurricane Katrina victims. It is clear that President Trump followed the advice of U.S. Senator Charles Grassley (R-IA) who warned him not to make the “same mistake” President Bush did after Hurricane Katrina.

President Trump is not only cheer-leading for the people of Texas; he is also personally contributing to their recovery by donating $1 million to relief efforts. In fact, to provide an even greater assist to the region, the President declared Sunday a National Day of Prayer for the victims of the hurricane.

In many different ways, President Trump is demonstrating a sincere interest in the well-being of Hurricane Harvey victims. For people who have been ravaged by such a catastrophe, this encouragement, coupled with a tangible action plan for recovery, is welcome news indeed.

I question the sanity of anyone who chooses to live below sea level.

How much of Katrina was truly a failure at the federal level, and how much was a media/liberal creation of a narrative, that Bush was to blame??

Bush declared a federal disaster even before Katrina hit.

The fact that local officials are the key people in charge when a disaster hits was lost in the media/liberal narrative that Bush was uncaring and inept and all that.

I couldn’t believe the left could politicize a hurricane when Katrina hit. Yet they did.

Maybe part of what we’re seeing is that the left saw that they couldn’t successfully politicize this hurricane, so they chose not to make that effort.

Well, you have a point.

And let’s face it that natural disasters don’t happen every year everywhere. People just don’t think about it until it happens.

GWB, much as I am not a fan, was set up by the democrat governors ..who would not sign off to allow Fed funding to happen emediately.
Although, unlike Bush..Trump would not put up with that kind of crap.
He would have certainly called the Governors out.

What if you’re afraid of heights?

It also reminds us, ONCE AGAIN, of what poor handlers Dubya had.

Contrary to Shelia Jackson Lee’s pronouncement, Houston is not below sea level.

A big difference was that Bush was working with a democrat governor and Trump gets to work with a Republican governor.

A second big difference is that the media can’t control the message as well these days.

Katrina was truly .... a media/liberal creation of a narrative, that Bush was to blame??
Fake news.
That disaster also hit a tender spot, mostly dimocrat if you know.

Yeah, living in Death Valley can’t be much fun.

The media and the left mercilessly destroyed GWBush over Katrina. They have turned “Katrina” into a meme that means “GWBush hates Blacks.”
The media and the left were listening to every word from Trump’s mouth, and monitoring his every action. He did nothing wrong, but nevertheless the f*ckfaces said he had no empathy.
To a lefty, this means that Trump should have SAID warm, comforting words like “I feel so deeply for the people who have died. I really have empathy for them, bla bla bla.”
Instead he went to work to help them! Words mean nothing! Actions do!
F*ck the left.

15 posted on 09/02/2017 10:37:34 AM PDT by I want the USA back (Lying Media: completely irresponsible. Complicit in the destruction of this country.)
[ Post Reply | Private Reply | To 1 | View Replies]
To: Dilbert San Diego
The misreporting, blatant lying and hyper-partisanship of the press during Katrina stands out as the moment when the MSM went over the wall. It was bad before. There has been no semblance of even-handedness since. The key mistakes in New Orleans before and during Katrina were entirely the doing of Gov. Blanco and Mayor Nagin. The press simply lied about it.
16 posted on 09/02/2017 10:43:09 AM PDT by sphinx
[ Post Reply | Private Reply | To 4 | View Replies]
To: sphinx

And so Bush was the Republican they could blame, since Nagin and Blanco were both Democrats.

The NO disaster was a fuster due to the Mayor and Governor failing to call for evacuate after Bush told them to. The “chocolate city” Mayor ended up in jail for stealing and freezing cash. Remember that?

The NO disaster was a fuster due to the Mayor Nagin and Governor Landrieu failing to call for evacuate after Bush told them to. The “chocolate city” Mayor ended up in jail for stealing and freezing cash. Remember that?