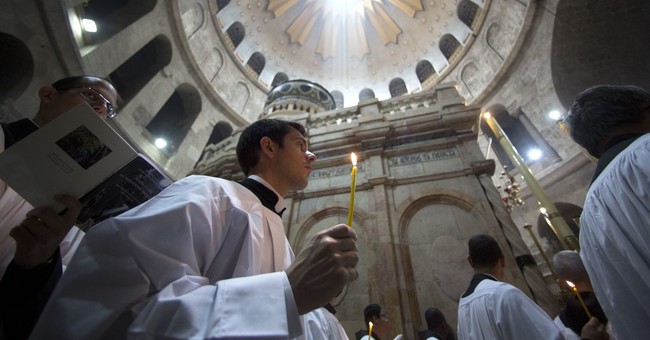 The left has gotten away for too long with the false assertion that Christians are judgmental. It is at a frightening level that is progressing toward totalitarianism. But they know if you call a red crayon blue enough times, people will start to believe it. This is to deflect from their own high level of judgmentalism, which I described in a previous article.

The truth is Christians are not aggressively trying to prosecute and sue people based on who they are. It is the left that is viciously targeting Christians, including first lady Melania Trump. Several fashion designers said they refuse to design clothes for the first lady, citing conscientious objections. Why isn't the left filing lawsuits against these designers? They rush to court when Christians, also citing conscientious objections, decline to service same-sex weddings. The left's zealousness against these Christian business owners has forced them out of business or slapped them with huge fines. Even more disturbing, Christians who conscientiously object are now being criminalized.

The Bible teaches Christians to treat people kindly, not judgmentally. The left likes to cherry pick Bible verses, particularly from the Old Testament, and point to them as proof Christians are judgmental. They deliberately ignore the fact that Jesus ushered in a new era of forgiveness regarding many of the Old Testament laws. So much that the left is ironically fond of claiming Jesus was a leftist.

Although the left cites Old Testament laws to condemn Christians as harsh "eye for an eye,” judgmental people, the New Testament Jesus came in to the world to "save" it, not condemn it. (John 3:16,17) By his death, Jesus ushered in a "New Covenant" that emphasized the redeeming and transforming change of a person's spiritual nature when he or she came to faith in Christ. Although the Ten Commandments were never repealed (they would form the “moral” base of New Testament Christianity), the over 600 Old Testament laws were now replaced by only two laws:  1) love God and 2) love your neighbor as yourself.

It is true that God punished people in Old Testament days, but Jesus taught redemption and forgiveness. You cannot read the Old Testament without taking into account the New Testament’s softening effect. Christianity emerged with Jesus. To blame Christians for actions that occurred prior to their existence is a bit duplicitous.

Jesus told a prostitute that he didn’t condemn her and to go and sin no more. While being crucified, he responded to one of the criminals on the cross next to him who asked him to remember him, “Today you shall be with me in paradise.” There are many stories and parables like this. Jesus was kind, and taught Christians to emulate him.

The Bible doesn’t approve of adultery, homosexuality and other types of behaviors. Yet Christians aren’t trying to punish people for those types of activities. In fact, government laws on the books prohibiting that kind of behavior have gradually been repealed in recent years.

The left will point to historical instances where Christian churches justified violence and draconian punishments, such as the Spanish Inquisition and the Crusades. Christians have learned from mistakes some of them made in the past. It is not how Christians treat people today. Regardless, the Bible says no one is perfect, including Christians.

The late 20th century conflict in Northern Ireland is often portrayed as a religious war between Catholics and Protestants, but that is not accurate. According to an educational site, “The conflict is primarily a social and cultural one,” very similar to the hostile relations between different ethnic groups migrating to early America. “Religious teachings are not an issue between the Catholics and Protestants.”

Christians are some of the kindest, most giving people. They open their churches, hearts and homes to the world. They listen to the struggles of others, responding with prayer and often take kind actions to help the ones struggling or suffering. The Bible instructs them to. If there are still a few bad apples here and there, they do not speak for Christianity. Better the hypocrites are in the church than outside of it, because perhaps the church tempers them a bit. Hypocrisy doesn’t invalidate the religion, because the Bible teaches no man is without sin.

On the other hand, the left gives Muslims a free pass when it comes to judgmentalism. Unlike Christianity, that religion has draconian penalties for many of the behaviors considered a sin in the Bible, including death. There are additional behaviors addressed that are not found in the Bible, such as a severely restrictive lifestyle forced on women. The penalties for women not complying include death. Much of the religion hasn’t abandoned previous violence, but instead expanded it in recent years. Today, radical Islamists regularly murder thousands of Christians and other Muslims. Muslim doctors in the U.S. were caught this past week performing genital mutilation on young girls, but the left was silent.

War is peace. Freedom through slavery. Ignorance is strength. Might as well add to writer George Orwell’s list of totalitarian oxymorons: Christians are judgmental.

I teach technology subjects in a Christian school, and “judgemental” comes up often.

The word does not mean that Christians accept evil: Christ didn’t condemn the woman, but He did admonish her to stop sinning.

Has been misinterpreted by the left on purpose forever.

So if a guy is caught having abused a child for a year, you don’t get to abuse him for 10.

Doesn’t sound vengeful to me.

But heck, if it makes Jews or Catholics look bad, the left will twist anything.

Libs purposely discernment with judgement. They are not the same.

He was judgmental. Ask the pharisees and the money changers.
The only issue is judging righteously.

This piece is historically illiterate and reflects what’s wrong with Christians today.

He was judgmental,and a lot of the Bible is basically a textbook on how Christians should be judgemental,i.e., discernment. People sure do take out of context, “Judge not that ye be not judged.”

What the skool system does is teach little children that it is EVIL to “judge”.

No. Judgement is essential for living a good life. Wisdom is the ability to discern Good and Evil-—as Cicero said thousands of years ago. That hasn’t changed but since the Leftists need to normalize baby-killing and sodomy in the children, to flip 2000 years of Christian Ethics back to the “ethics” of tribal, pagan, satanic, collective cultures, they are brainwashing little children to make them “feel evil or bad” if they “think” some evil behavior is “Evil”.

Any time you use people in vile,dysfunctional ways that destroy dignity and meaning and uses others as a Means to an End (Marxism) which is what slavery, incest, sodomy and baby-killing always does——then it should be labeled “evil”.

But we teach little children that people sodomizing others or “choose” to kill their own genetic offspring is “Good”. We are destroying wisdom in little children, blurring Truth and destroying Natural instincts which “knows” evil and “good” by age 4 if they are raised in a healthy, Natural family.

You have to get the little children away from the male/female paradigm to warp their perceptions of male and female interaction, and to normalize the evil, vile behaviors of satanists.

That is what publik skools are for-—to make dumb, ignorant slaves for the State control System. They destroy virtue formation in children, on purpose, to destroy wisdom, destroy all virtue and inhibitions so they will grow up to be vulgar, crude slaves for the State. Vice creates slaves only (Founders/Aristotle/Socrates/Christian Theology).

To flip 2000 years of ethics back to paganism/atheism/satanism, you have to control the words/language of little children to make Good into Evil-—which is being done in the culture 24/7 to produce snowflakes—people who only experience “cognitive dissonance” when they are exposed to the Truth (God). Truth ONLY will set you free!!!!!!!

And judgement—that act of discerning Good and Evil and Truth (God) is what is being destroyed (erased) in our children. They have been blurring the lines for a century that are obvious to any true Christian-—to destroy natural instincts in children, so they will believe Slavery is Freedom, Vice is Virtue and Boys are Girls for the NWO of totalitarianism-—complete dehumanization (no reason) or transhumanism (bots controlled with chips).

Teacher tells student they have an incorrect math problem answer.

That’s where we are.

I figure we're better off seeing to plank in our own eyes before we worry about what might be in others.

You couldn’t be any more right. I suspect it’s because many people don’t actually read; they repeat what they hear.