In a previous article, I submitted a list of considerations to prove that the Democrats are playing the worst sort of politics in making the indefensible claim that “the Russians” succeeded in sabotaging the presidential election to hand President-Elect Donald Trump a victory. Here, I strengthen this case.

There are still other thoughts that put the lie to this narrative.

The first is that Wikileaks is responsible for leaking the DNC emails. Up until very recently, Democrats would’ve been the first to insist upon this hacktivist organization’s impeccable reputation. It is to Wikileaks, after all, that we owe thanks for the largest leak in American military history, the Iraq War documents leak. And it is Wikileaks that has been shedding light on the massive, Constitutionally-dubious surveillance programs of the National Security Agency (NSA).

Wikileaks founder Julian Assange has repeatedly, unequivocally denied that either the Russian government or any government is the source of his information concerning DNC emails. The source, he has admitted, is a non-state actor. He told NBC News that there is “no proof whatsoever” for the Democrats’ allegation that the Russians were involved.

The idea that the Russians or anyone would want to interfere, or try to interfere, with the world’s preeminent superpower is itself quite plausible. It is common practice for governments, including that of the United States, to influence, or try to influence, in various ways the internal affairs of other countries. But the Democrats, in framing this line in such a way as to lay bare its use as a partisan ploy, stretch credibility to the snapping point.

The implications of “the Russians Made Us Do It (lose!)” narrative are impossible for any remotely sensible person to accept.  The proponents of this fiction expect for us to believe that: (1) This is the first American election ever to have been decided by a foreign power; (2) Of all of the actors, state and non-state, to have an interest invested in undermining the American electoral process, “our intelligence agencies” have been able to identify “the Russians” alone to have done so; and (3) If not for Russian interference, Hillary Clinton would have defeated Donald Trump!

Let’s look at these in turn.

(a) This is the first American election in which any foreign power tried to intervene, and the only reason that there was any foreign intervention is because another government wanted for this one, unique candidate (Trump) to win.

Never before has there been post-election (or pre-election) hysteria about foreign sabotage of our elections. Even President Obama, just as recently as October, ridiculed Trump for his talk about the possibility of a “rigged” election. “There’s no serious person out there,” the President said during a press conference, “who would suggest that you even could ‘rig’ America’s elections.”

But now, suddenly, Obama is in the vanguard of the movement to delegitimize the election outcome by implying that (of all entities!) a foreign government “rigged” the election in favor of Trump.

(b) Although any number of actors, state and non-state, could have tried hacking the DNC, the Democrats point the finger exclusively at Russia.

But, as the creator of the NSA’s global surveillance system, Bill Binney, assures us, if there was hacking, anyone could’ve done it. More importantly, the NSA would easily be able to determine the source(s).

No “IPs or other signatures of APT’s 28/29” (the culprits responsible for hacking) have been presented, Binney remarks in astonishment. This is astonishing because once the IPs “and/or other signatures” of the hackers are available, all that the NSA would have to do is “use Xkeyscore to help trace data passing across the network and show where it went.” Binney alludes approvingly to Edward Snowden who tweeted: “Even if the attackers try to obfuscate origin, #XKEYSCORE makes following exfiltrated data easy.” Snowden adds: “I did this personally against Chinese ops.”

Zerohedge notes that “since Wikileaks is (and has been) a cast iron target for NSA” and other intelligence agencies throughout the world “for a number of years, there should be no excuse for them missing data going to any one associated with Wikileaks.”

(c) Though no one will explicitly say it for fear of being found out for the idiotic contention that it is, in claiming that the Russians interfered in our election in order to get Trump elected (a position for which there is minus-zero evidence), the Dems would have us think that if only this interference didn’t occur, Hillary Clinton would’ve won!

In reality, the country hasn’t witnessed the likes of the pummeling that Clinton received since Ronald Reagan’s landslide victory against Walter Mondale in 1984. Of America’s 3100 counties, Trump won at least 2600—84 percent—of them. He also won 30 of the 50 states.  Some 220 counties that voted for Obama in 2012 turned in favor of Trump, compared to only 17 that flipped from Mitt Romney to Clinton.  In a whopping 2,728 counties that Romney claimed four years ago, Trump outperformed him.  In contrast, Clinton outperformed Obama in only 383 counties.

Had it not been for a single, overwhelmingly-Democratic state, California, Trump not only would have trounced Clinton in the Electoral College, as he did (306 to 232); he also would have defeated her by 1.4 million votes in the popular vote. In fact, even had California just voted as other blue states did (awarding Clinton on average about 53.5 percent of the vote as opposed to the 61.5% that California delivered her), Trump and Clinton would effectively ended with a tie in the popular vote.

The Democrats, however, would have us think that it was all made possible by Putin and his government-sponsored hackers.

“Had it not been for a single, overwhelmingly-Democratic state, California, Trump not only would have trounced Clinton in the Electoral College, as he did (306 to 232); he also would have defeated her by 1.4 million votes in the popular vote. In fact, even had California just voted as other blue states did (awarding Clinton on average about 53.5 percent of the vote as opposed to the 61.5% that California delivered her), Trump and Clinton would effectively ended with a tie in the popular vote. “

If it had not been for illegal aliens voting in California and New York, Hillary would have lost the popular vote by 3 to 4 million!

In a whopping 2,728 counties that Romney claimed four years ago, Trump outperformed him. In contrast, Clinton outperformed Obama in only 383 counties."

So I guess when foreign government's gave millions of dollars to Hillary Clinton, they weren't trying to intervene in our election?

This is the lie they're trying to force us to swallow. No thank you. 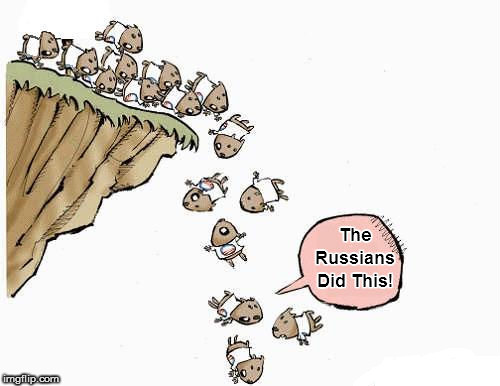 They conveniently forgot about the million$ in foreign donations Barack Obama got in 2008 from people with strange names like John Galt, Adolph Hitler, Porky Pig and Bugs Bunny.

APRIL 20, 2011
All the president’s funny money by Michelle Malkin

Last week, the laggard watchdogs at the Federal Election Commission announced an audit of the Obama 2008 campaign committee — which raised a record-setting $750 million. White House flacks are downplaying the probe as a “routine review.”

But there’s nothing routine about the nearly $3 million Obama has spent on legal expenses to address federal campaign finance irregularities and inquiries. Roll Call reports that Obama’s campaign legal fees have exceeded all other House and presidential campaign committees, including members of Congress under ethics investigations.

There’s nothing routine about the whopping $6 million that Team Obama has refunded to individual donors since Obama took office.

And there’s nothing routine about the 26 warning letters to Obama for America totaling “more than 1,500 pages of questions and data that outlined compliance concerns — including the longest one ever sent to a presidential candidate,” according to Roll Call.

Among the Obama 2008 campaign committee’s shadiest transactions that have gone unpunished:

— Foreign funny money. Federal election law bans foreign nationals from contributing to American candidates. But during 2008, the Obama campaign was forced to return an illegal foreign donation worth $31,100 made by two brothers in the Gaza Strip, and even mainstream news outlets reported that candidate Obama’s money-handlers had routinely failed to verify citizenship by checking donors’ passports. As the Associated Press reported at the time: “One donor, Tom Sanderson of Canada, made clear his $500 contribution came from a foreign source. He included a note that said, ‘I am not an American citizen!’ Obama’s campaign took the money anyway…”

Another illegal foreign donor, Australian Richard Watters, contributed $1,000, “entering a fake U.S. passport number — a random jumble of numbers and letters” onto the Obama donation website. “He said he also checked a box stating that he was an American living overseas, ‘because I could see it wasn’t going anywhere if I didn’t do that.'”

Obama raked in at least $2 million in overseas donations.

— Online donor credit-card fraud. Weeks before the 2008 presidential election, investigative journalist Ken Timmerman blew the whistle on rampant phony straw contributors slipping through the Obama donation site. Just one example: “Mr. Good Will” from Austin, Texas. Mr. Good Will listed his employer as “Loving” and his profession as “You.” Timmerman’s analysis of 1.4 million individual donations to the Obama campaign discovered “1,000 separate entries for Mr. Good Will, most of them for $25. In total, Mr. Good Will gave $17,375. Following this and subsequent FEC requests, campaign records show that 330 contributions from Mr. Good Will were credited back to a credit card. But the most recent report, filed on Sept. 20, showed a net cumulative balance of $8,950 — still well over the $4,600 limit.”

— Social justice funny money. In 2008, the Obama campaign wrote checks totaling more than $800,000 to a nonprofit offshoot of ACORN called Citizens Services Inc. The campaign claimed the money went to nonpartisan get-out-the-vote services. But receipts showed the funds paid for polling, advance work and event staging supplied by a nonprofit that supposedly does simple canvassing work on behalf of low-income people. The FEC allowed Obama to wave his magic wand and amend the records to change political expenses into non-political ones. As a Republican National Committee staffer commented at the time: “For a candidate who claims to be practicing ‘new’ politics, his FEC reports look an awful lot like the ‘old-style’ Chicago politics of yesterday.”

Nothing to see here, move along? The only “routine” business as usual being conducted here is Chicago-style self-exemption business as usual: Rules are for fools. Let the crooked cash flow. "

The Democrats now have their “birther” issue to push for a few years.

It is more likely Obama was born outside the USA, than that the Russians stole the election.

Neither will be proven, but both provide comfort politically.

I don’t see how Hillary could have outperformed Obama in 383 counties, considering how few counties that went for Romney in 2012 went for her in 2016.

I have no reason to distrust Julian Assange.

I have a million reasons to distrust the Fake News Networks.

Steve R. Pieczenik, MD, PhD has written and posted articles and videos detailing the attempted Coup of the US Government by Hillary & Bill Clinton with the financial support of worldwide “Donors” to the corrupt Clinton Foundation, as well as the Counter Coup by US Citizens, Law Enforcement and Intelligence community members who risked their lives and their careers to expose the truth with the aid of Julian Assange and WikiLeaks for the entire world to see. Summary video here:

Steve’s statements are consistent with those of Julian Assange, who has also risked his life in revealing the truth. He also lost his personal attorney this year in “an apparent suicide” by “jumping in front of a train” in April 2016. DNC staffer Seth Rich (possible source of DNC docs delivered to WiliLeaks in London via courier) was also murdered July 10, 2016, shot twice in the back while walking in Washington, DC in an unsolved “robbery” in which nothing was taken...

Hacker cam leave any code trail they want it’s why we have so many of them world wide.