BREAKING: Ecuador admits it cut off Assange's internet due to his use of it to interfere in [tr]
Politico via Twitter ^ | October 18, 2016 | Eric Geller

BREAKING: Ecuador admits it cut off Assange's internet due to his use of it to interfere in the U.S. election.

Rumors that in squeeker battleground states the libs will be using some atmospheric laser gizmo stuff the night before the election to convince us GunHavingBibleBangerIdiots that Earth is under extraterrestrial attack:

Big DC think-tank polled and found it was the only think that could keep large numbers of die-hard Trumpists away from the polls. 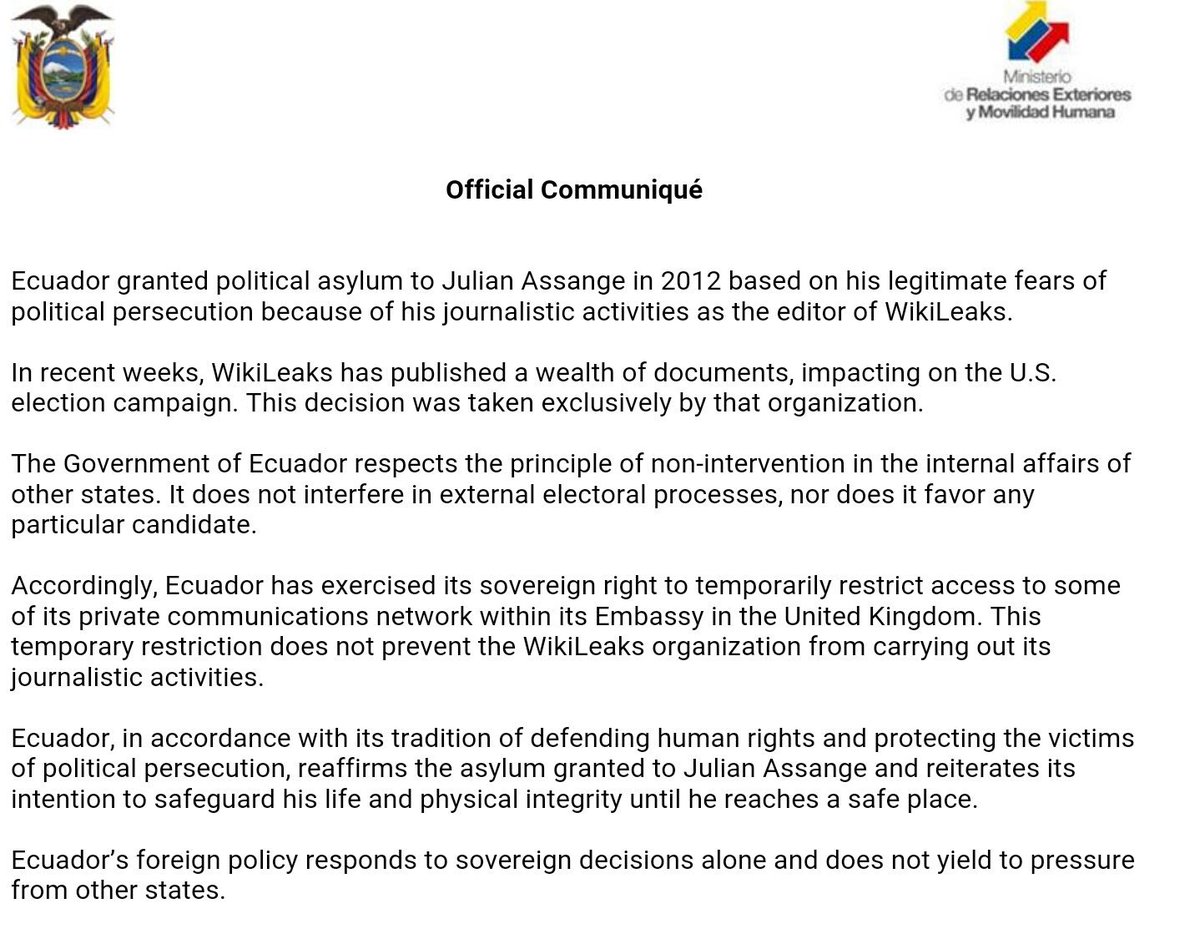 Relax, enjoy a homebrew,
load more ammo and pass it on...

When they suspected Snowden was flying to Bolivia from Russia they forced down and SEARCHEd the jet of the PRESIDENT OF FRIGGIN’ BOLIVIA..!!!

That’s an act of WAR, basically.

Kerry and his Democrats would not have risked this move unless they’re internal polls were showing Hillary losing.

Are you saying they just told Assange to Quito?

Except they just yielded to pressure.

Sounds like they got threatened with an Ecuadorian spring or something.

Soon a pallet of Dollars, French and Swiss Francs will be headed for Equator.

Cutting his comms? This is what a coup looks like. We are living through a coup. Never was a tin foiler but here I go...

Lolwut? NOTHING is going to keep me from voting. Hell or high water.

We give Ecuador $25 million a year in foreign aid.

Cut that money off and they will march Julian out of that embassy.

Well, yeah, with the new revelations about the incredible amount of illegal activity, inciting violence for money, voter fraud, and nothing being done about any of it, it’s pretty clearly a coup attempt. Or, the corruption may be the new normal and it’s Trump who’s attempting the coup.

Internet or no Internet, other members of the Wikileak organization are still releasing Podesta’s e-mails.

Also, Assamge claimed recently that he has the 33,000 deleted e-mails of Pickles Clinton, and will release them in 4 - 5 batches by November 1st.

I hope it happens.

Of course. Ecuador hates having outsiders interfere in elections. They’ve been blocking it since the Conquistadors./s