A few years after his failed presidential campaign, John Kerry went on Bill Maher and joked about killing President Bush.

There was no media outrage. The event is remembered only on conservative websites.

And barely even there.

At least back when Kerry had joked about the assassination of Dan Quayle, he had been forced to briefly apologize for it. But less than a decade later the media bias had become so pervasive that joking about murdering Republican politicians had become so socially acceptable that it wasn’t even worth mentioning.

We are talking only about Republican politicians of course. That is why the media reacted with hysterical outrage to its latest manufactured Trump scandal. Not only did Trump not say what the media has accused him of saying, but the media has no problem when Democrats openly called and call for the assassination of Republican presidents and presidential candidates.

During Trump’s candidacy a fine roster of media folks covering the gamut from the New York Times to VICE to the Nightly Show have joked about killing Trump or about his assassination. Anyone objecting to that sort of good clean progressive fun would have been a humorless spoilsport.

Trump’s remark however is being denounced in the press as everything from a threat to sedition.

What did Trump actually say? When you go to the tape, it turns out that he said nothing.

The entire thunderstorm of outrage is based on taking Trump’s back and forth speaking style, radically different from those of ordinary politicians, and then removing the context of his discussion about the Second Amendment. The only thing Trump did was suggest that maybe there would be another option beyond the Supreme Court for protecting the Second Amendment. The crowd does gasp and laugh, but Trump offers no sign that he’s delivering a joke or saying anything at all subversive. As is so often the case, others were projecting their own expectations on Trump. Trump didn’t even notice their reactions.

But what if Trump had indeed joked about Hillary Clinton’s assassination? For that matter, what if he had been serious about it?

Just ask the next leader of the Senate Democrats.

New York State Comptroller Alan Hevesi, who like so many local Democrats has been sentenced to prison on corruption charges, described Senator Schumer as the man who would "put a bullet between the president’s eyes, if he could get away with it." The president in question was obviously a Republican.

The left and its media auxiliaries shrug their shoulders when it comes to jokes or even threats about a Republican in the White House. Bush choking on a pretzel was a particular subject of political comedy. But make a joke about Hillary Clinton gasping over the hot sauce she claims to carry in her purse and it’s a horrifying threat.

That was half a year after the media had lost its collective minds and attempted to blame Palin’s political map, or rather the bullseyes on it, for a mentally ill man shooting Rep. Gabrielle Giffords.

A former top Secret Service official anonymously told the media that Trump’s non-joke about Hillary Clinton, invented out of whole cloth by the media, was “close to the edge” and might be referred to Federal officials for potential legal action.

It goes without saying that Kerry’s gag about beating Bush to death with a rock was not referred to anyone or anything.

Americans do not live in a monarchy. Freedom of speech is meant to protect unpopular speech. The trouble is that it doesn’t anymore. Instead it only protects inappropriate speech when it’s popular with the prevailing political elites of the left.

A joke about killing a president is only wrong if he’s a Democrat. It’s especially wrong if he’s further to the left than just the average Democrat. The only standards that exist are those of political allegiances.

The media’s hysteria is meant to police speech based on its own political allegiances. If Hillary Clinton had joked about Trump being shot to death by illegal aliens, the media would have cheerfully celebrated it with handcrafted headlines about how wonderfully daring she was. Then, if outrage had mounted, fact checks would have been deployed to explain that she never really meant what she actually said.

It might very well be possible to have a society in which nobody makes death threats about politicians. But that is not the society that the media wants. Instead it wants a way of life in which jokes about murdering Republicans are hilarious and gags about Democrats dying are sedition, treason, incitement to violence, veiled threats and possibly even threats not dressed up in a big black burka.

And that’s not America. It’s a dictatorship with occasional elections.

Americans do not believe that becoming a politician entitles one to the privileges of lese majeste. Our political humor was never tame. It was often edgy. That was how we knew that we were a free people.

But our new elites have conceived of a new form of lese majeste, one that does not accrue to our new monarchs based on their titles, but based on their politics. The left has conceived of and implemented a society in which it is a mortal crime to insult the left. And like most naked emperors it is highly sensitive to even the faintest implication of a slur on its imaginary honor. Its ritualized hysteria over Trump is an expression of its ugly totalitarian impulses and its intolerance to any perceived slight.

There is a long ugly history of the left threatening sanctions for speech. This is yet another episode in that history.

The left invents its own speech nightmares, brings them to life and then demands that something be done about them. Having invented a Trump threat, the left demands that someone do something about the threat that it invented. But if indeed the Secret Service were to take action against Trump, it ought to haul in Secretary of State John Kerry from his latest jaunt and every wit and writer who fantasized about Bush biting the big one. And then it would be the left crying about censorship.

Like all tyrants, the left must learn that no amount of terror or intimidation will win it immunity from the free speech of free men. Its politics do not make it special. They do not give it the moral authority to threaten without being threatened, to censor without being censored and to break the rules without having everyone else break the rules.

The grim joke is that the only political murder victim here is still the Bill of Rights.

TOPICS: Editorial
KEYWORDS: Navigation: use the links below to view more comments.
first 1-20, 21-24 next last
The grim joke is that the only political murder victim here is still the Bill of Rights.
1 posted on 08/10/2016 12:50:15 AM PDT by Mr. Mojo
[ Post Reply | Private Reply | View Replies]
To: Mr. Mojo
As is so often the case, others were projecting their own expectations on Trump.

I've thought about this all day, and I realized this is not on Trump. It's projecting their own expectations on the 2nd Amendment people.

The Bible-thumping, church-going, God-believing, wild-eyed unstable trigger-happy angry out of control inbred hillbilly redneck gun owners who actually allow their children to kill bambi and rabbits and who can't be trusted to have guns!! (do I need the /s tag here?) That is who the press is actually attacking. The NRA had them tagged from the instant... it just took me a while of thinking about it to catch up.

ha! Morning Joe leadoff: Trump’s comment was a ‘dogwhistle’ to ‘southerners’. I detest the MSM.

I remember Cruz joked about killing Trump. Joked about running Trump over with a car and not pressing the break

Great Greenfield essay. Didn’t want you to miss it because it was posted in the wee hours.

John Kerry once served as a leader in a group that was planning and training to assinate 20 US Ssenators who supported the Vietnam War, the Democrat Party were directly connected to this terrorist group. This group also gave information to the Viet Cong dealing with troop movements, weapons and tatics. This information lead to a top secret base being over run and everyone killef.

Trump’s way of speaking on any subject is fragmented, nothing new about that.

Those who heard a threat are morons. Geraldo - acting as chief moron — seems to be working overtime with his outraged instigation style.

Trump said that 2nd Amendment supporters would have something to say if anyone tried to take away their gun rights. That’s basically what I heard. I didn’t hear anything in that about Clinton. Honesty,when I heard it, what I heard was “Don’t tread on me.” That was addressed to everybody. I didn’t think Clinton at all.

Democrats are more equal than Republicans 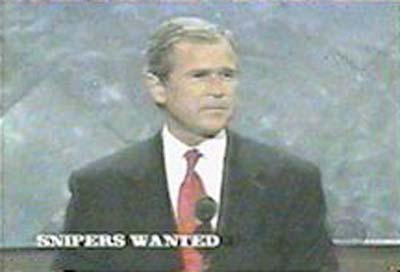 14 posted on 08/10/2016 5:48:32 AM PDT by Gay State Conservative (The Rat Party,try as it might,just isn't very good at hiding what it *truly* is.)
[ Post Reply | Private Reply | To 1 | View Replies]
To: Mr. Mojo
Ronald Reagan once joked "My fellow Americans, I'm pleased to tell you today that I've signed legislation that will outlaw Russia forever. We begin bombing in five minutes."

Was Reagan inciting violence? Did that disqualify him from the Presidency?

It’s all about Hillary Clinton’s wet dream of “peer pressure and shaming” to get us to shut up.

Thanks for the *PING* FRiend, this is indeed, a great article!

Threaten or even joke about assassinating ‘RATS?

FELONY!! DO THE PERP WALK!! HOLD WITHOUT BOND!! CONVICT!!

Threaten or joke about assassinating Republicans?

Oh c’mon now, where’s your sense of humor? Can’t ya take a joke?

F—KING HYPOCRITES, the lot of them.

Dems get green light to joke about assassinating Pubbies.

And, to twist and turn around anything a Pubbie says.

“Blind” and “Flailing” certainly describes the LAMESTREAM
MEDIA’S obsession with “GETTING TRUMP”.