Former Senator Al D’Amato (R-NY) dropped a bomb on Sunday Morning Futures this AM. D’Amato told Maria Bartiromo that Hillary allowed Russia to take ownership of US uranium so they could sell it to Iran.

Hillary made it possible for the Russians to take control of one of our huge uranium producers and allow them to own the company, export the uranium and who do they sell the uranium to? Iran! Now if people knew that and that the foundation as a result of that got $135 million. I think people would start saying, “What?”

Former Senator Al D’Amato (R-NY) dropped a bomb on Sunday Morning Futures this AM. D’Amato told Maria Bartiromo that Hillary allowed Russia to take ownership of US uranium so they could sell it to Iran.

Hillary made it possible for the Russians to take control of one of our huge uranium producers and allow them to own the company, export the uranium and who do they sell the uranium to? Iran! Now if people knew that and that the foundation as a result of that got $135 million. I think people would start saying, “What?”

It’s true.
In January 2013, Pravda celebrated the Russian atomic energy agency’s purchase of the company “Uranium One” in Canada.

Hillary! Supporters: “What difference at this point does it make?” 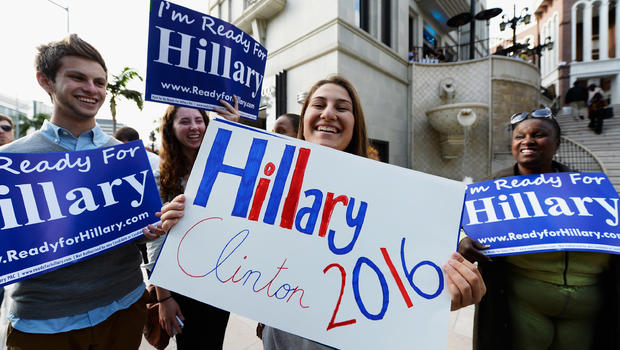 PIC Circa 2010--Ex-Pres Clinton in Moscow having a laugh w/ Putin
as strategic US uranium deposits were sold off to Russia
facilitated by Secy Clinton, as Bill globe-trotted to set up the deal.

"Hahahaha. US ntl security? Hahahaha. You gotta be kidding, Vlad."

NYT REPORT: As the Russians gradually assumed control of Uranium One in three separate transactions from 2009 to 2013, Canadian records show, a flow of cash made its way to the Clinton Foundation. Uranium One’s chairman used his family foundation to make four donations totaling $2.35 million. Those contributions were not publicly disclosed by the Clintons, despite an agreement Mrs. Clinton had struck with the Obama White House to publicly identify all donors. Other people with ties to the company made donations, as well.

The NYT report noted that these uranium investors
also donated to the Clinton Foundation, as follows:

<><> Canadian Frank Giustra—globe-trotting pal of Bill-—donated $31.3 million and a pledge for $100 million more to the Clinton Foundation. Giustra built a company that later merged with Uranium One. Seems to have facilitated the uranium sell-off.

<><> Canadian Ian Telfer—donated $2.35 million to the Clinton Foundation. Mining investor who was chairman of Uranium One when an arm of the Russian government, Rosatom, acquired it.

<><>Paul Reynolds—donated $1 million to $5 million to the Clinton Foundation Adviser on 2007 UrAsia-Uranium One merger. Later helped raise $260 million for the company.

<><> Canadian Neil Woodyer-—Founded Endeavour Mining with Giustra—donated $50,000 to $100,000 to the Clinton Foundation. Adviser to Uranium One.

<><> GMP Securities Ltd.-—Donating portion of profits to the Clinton Foundation. Worked on debt issue that raised $260 million for Uranium One. (could also be the money-laundering apparat)

It was a Democrat in charge then, too.

Hes a gold mining mogul......he facilitated the takeover of US uranium assets.... he received tax dollars from Hillary's State Dept.

<><> (2) to the Canada-based "Clinton-Giustra Enterprise Partnership." The NY Times reported the "Clinton Giustra Enterprise Partnership" collected about $33 million US tax dollars from Hillary's State Dept between 2008 and 2013.....$25 million of which was passed back across the border to the US-based Clinton Foundation.

Giustra then pledged $100 million to the Foundation after Clinton helped him clinch the mega-bucks uranium deal.

ITEM---millions of dollars and 1,100 donors are shrouded in mystery in the Canadian Giustra/Clinton operation. The Clinton Foundation signed a memorandum of understanding with the Obama White House agreeing to reveal its contributors every year. The agreement stipulates that the Clinton Giustra Sustainable Growth Initiative (as the charity was then-known) is part of the Clinton Foundation and must follow the same protocols.

A memo he provided news organs cites fiduciary obligations to its contributors and Canada’s Personal Information Privacy and Electronic Disclosure Act. “We are not allowed to disclose even to the Clinton Foundation the names of our donors,” Giustra says.

However, Canadian tax and privacy law experts were dubious of the Clinton/Giustra claims. A former director knowledgeable about tax policy at Canada's Department of Finance, said he wasnt aware of any tax laws that would prevent the Clinton charity from releasing its donor names. " There's nothing that would preclude them from releasing donor names. It's entirely up to them."

If this woman is allowed to escape justice for her previous illegal and treasonous actions, and then, as President, allowed to continue her unabated sellout & destruction of America, this country will be North Korea in eight years.

If we allow this to happen, we deserve it.

WHY THE HELL isn’t this said on EVERY DAMNED SHOW????

"Never heard of him; I'm changing the channel!"

This should be repeated by EVERYONE!

Yeah, I think they are.

So, do you believe that if only we could get these not-so-bright democrat voters to understand how they have been hoodwinked and lied to by people like Obama they would realize the error of their ways and stop voting for liberal liars and criminals?

Are you one of the people who believes that Obama does things that seem foolish, not well thought out, and not in America's best interest because he is an air head who just doesn't seem to know what he is doing or doesn't understand the real problem?

The problem with The Obamas and The Clintons is that have been involved in so many treasonous acts and criminal activities that the normal law abiding citizen’s brain is overwhelmed and cannot absorb it all unless you simplify them by putting them in a list, categorizing them and putting a small synopsis with links to source materials and a more detailed accounting of the events listing the victims and how they were affected. Otherwise the human brain shuts down almost in disbelief at all of the evil that has been done.

HITLER-Y is bought and paid for; SOLD to the highest
bidder. BILLIOUS CLINTOON, TOO.

33 posted on 07/05/2016 4:38:53 AM PDT by Twinkie (John 3:16)
[ Post Reply | Private Reply | To 1 | View Replies]
To: jsanders2001
unless you simplify them by putting them in a list, categorizing them and putting a small synopsis with links to source materials and a more detailed accounting of the events listing the victims and how they were affected.

The MSM sure as hell won't report it

After the last 7 1/2 I'm convinced there's some new places in Hell reserved for MSM journalists who skew the truth to assist evil. Hope the burners are a little hotter in there too.

I am becoming convinced you are correct in your assessment. And since neither MSM repetition nor GOP condemnation will occur, it’s yet another Clanton nothingburger.

The Democrat Party is a subversive organization from the top down, they are led by traitors, criminals and perverts, and there is no way to redeem or reform such vile scum, and they have been empowered and enabled by equally vile scum in the Republican Party.

The only equation that works is indictments and trials conducted by military tribunals staffed with officers still loyal to the Constitution, public disclosure of ALL crimes committed, and upon conviction, hand down the only sentence that is appropriate for such widespread treason, which is DEATH, and that sentence to be carried out within the hour.

It’s the only way America can possibly be purged of this cancer upon our national soul.

37 posted on 07/05/2016 4:50:32 AM PDT by mkjessup (Hillary Rotten Criminal is a f--king murdering sociopath. You want that in the Oval Office?)
[ Post Reply | Private Reply | To 29 | View Replies]
To: thoughtomator
Treason is one of the few crimes fully distinguished in our Constitution, and I would say that Hillary and Obama have met every legal requirement:

Treason against the United States, shall consist only in levying War against them, or in adhering to their Enemies, giving them Aid and Comfort. No Person shall be convicted of Treason unless on the Testimony of two Witnesses to the same overt Act, or on Confession in open Court. The Congress shall have Power to declare the Punishment of Treason, but no Attainder of Treason shall work Corruption of Blood, or Forfeiture except during the Life of the Person attainted.

Instead of mindless Tweets that deflect media attention from Hillary’s FBI interview, Trump should Tweet about this dangerous deal with Russia and Iran. It certainly gives evidence that his label of “Crooked Hillary” fits her.

“...indictments and trials conducted by military tribunals ... still loyal to the Constitution...”

Is the military still loyal to the Constitution? (I hope so - but wondering if anyone knows) I agree with you and wish it would happen. The corruption is at the very top (Obama must have benefited from the Clinton slush fund) and the republicans must be being paid off as well to do nothing about any of it and denounce Trump who is the ONLY one announcing that he will end the corruption of the uniparty.

Do you think your scenario of a military tribunal is too late?