Alex McCormick, a 19-year old from Essex, James Wallman, 23, from Hertfordshire, and 25-year old Lewis Ellis of Manchester, say their night of partying ended with the nightmarish realization they were being taken into custody by soldiers in one of the most dangerous places on earth.

Speaking to news.com.au, the trio say they have been working at bars and nightclubs in Ayia Napa in Cyprus.

After an all-night bender on Sunday, the three say they were scheduled to board a ship Monday morning for a day of dolphin watching.

But in their inebriated state, the young men apparently ended up on the wrong ship – a fact that only became apparent when the vessel was already out at sea, far from Cyprus.

Without translators, the three were unable to communicate with the crew of the ship, and with no cell phone reception or Wi-Fi connections, they could neither ascertain their location nor call for help.

After hours at sea the three spotted land, hoping that to arrive in Greece or perhaps Turkey.

Instead, however, they disembarked at what turned out to be the Syrian port of Tartus.

The three were captured by Russian soldiers, who took them in for interrogation.

But once it became clear what had actually transpired, the three say, the Russian soldiers arranged for them to be shipped back to Cyprus – but not before enjoying a good laugh at the seemingly absurd situation.

It would make a good movie script.

That should stop their drinking for about a week.

A little background music for this thread...

In my script...I’d have the two guys still in a daze when they enter the port...where there’s some ISIS attack underway, and they hunker down with the Russians and return fire. The two Brits turn into an Army, and suddenly change the whole dynamics of the battle, and by mid-afternoon...the ISIS thugs are in full retreat. The Russian commander comes up....gives each of the Brits some Vadimar medal, several bottles of vodka, and put them on a boat back to Cyprus. They consume all the vodka and wake up the next morning back in port and seem to remember some of the events but think it’s mostly from booze. Oddly, they look at the Vadimar medals and wonder how they acquired them. They agree though...they are awful thirsty, are looking for a pub along the dock.

The old Cypriot ship captain watches the two Brit lads walk away, and comments to his Gilligan-like first-mate...”Two drunk Brits....that’s all you need to take those those lousy ISIS guys.”

What ship crew would allow three drunk strangers on their ship? Would you not question who they are and what they’re doing there? 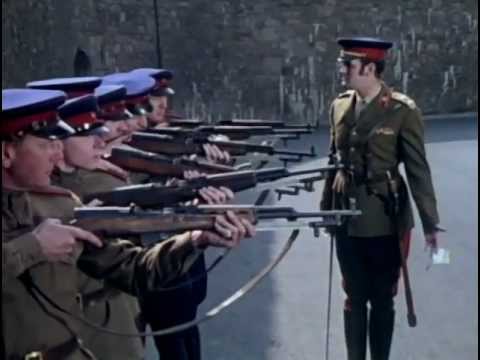 "How could you miss?" "Oh well, you'll want the A39 then...no, no, you've got the wrong map there, this is Stalingrad, you want the Ilfracombe and Barnstaple section."

They agree though...they are awful thirsty, are looking for a pub along the dock.

Yes, that sounds about right.

I would use three, Billy Connolly, Liam Neeson and Gerald Butler playing the Brits...

I agree on Gerald and Liam. I was thinking Simon Pegg as the third guy.

The Russian Colonel though....ought to be Jean Reno.

The abstemious Russians probably had a hard time understanding how they could have gotten so drunk.

And a good thing, too! Hsfield is kind of awkward to pronounce. (Unless you're Welsh, probably.)