“Going to Cruz in defense of Heidi.”

Except of course, Heidi herself.

“This is not going to turn out well for Fields!”

No it isn’t, nor should it. Her numbskull boyfriend was on the “party panel” on Kennedy’s FBN show yesterday repeating their latest version of “facts”. These two are youmg and stupid and doing everything they can to milk the moment and hopefully walk away with some “damages”.

Counter sue them into eternal insolvency. Well, that solves that. The writer of this piece should be made aware.

Did Amanda Carpenter pen that drivel for Mark Levin? She’s a writer for his show.

Thus far we have reports of two previous incidents of a similar nature. She is obviously not stable and needs help

She supposedly accused Allen West of sexual assault while at Fox.

I haven’t heard all of the events listed here, but most of them.

I am surprised that the guy in the post didn’t know she used to work at Fox. I think she also worked someplace before Breitbart. She seems to have trouble holding a job.

Didn’t know that. Is she sharing with him too ?

You expect us to believe that? I don’t care what my eyes tell me! (sarc)

both of them are voting for Hillary.

Or the DA that actually tried to prosecute. He’ll be Nifong’ed. 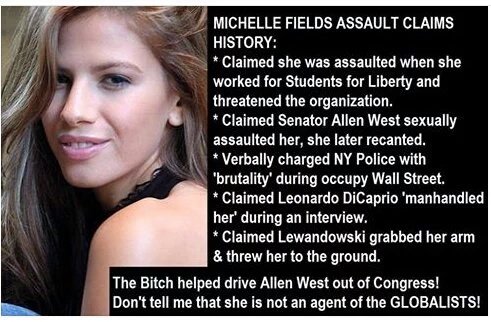 Who was the state AG that endorsed TRump? Pam Bondy? Do I have that spelled correctly?
I believe she could step in. But won’t. She will allow Trump’s law team handle her.

Rumors in Florida are that Florida prosecutors are reluctant to go forward with the Field case. Looks like the Jupiter Police Department moved it forward under great pressure from the Palm Beach Democrat And GOP Establishment politicians. They (procecutors) want no part of it. Probably will not go to trail with jurors, and will be dismissed within the next few weeks!!! We shall see!!! Am proud that Trump is standing by his loyal employee who did no wrong, whatsoever, based on review of the video avaiable!!! Ms. Field should be should sued for every penny she has. The truth will emerge...when Ms. Field feels the heat of discovery!!! shucks...she may even wish to withdraw the charges...if she has any brains!!!

“both of them are voting for Hillary.”

So is the prosecutor ...

A graphic for the files above