HARRISBURG -- Carmon Elliott is not a lawyer. But he got to play one Thursday in state court when he tried to convince a judge that Republican U.S. Sen. Ted Cruz is really a Canadian who has no constitutional right to be a candidate for U.S. president.

Senior Judge Dan Pellegrini of Commonwealth Court was as impressed with Elliott's oral arguments as he was his Uncle Sam tie.

"By the way, I like your tie," said Pellegrini, who's known for his wit as well as his probing legal questions.

Some judges don't like hearing election petition cases argued by pro se litigants because they can be unprepared and disruptive to the political process, Pellegrini said. Not so in Elliott's case.

"I have to compliment you," Pellegrini said in court. "You represented yourself well today."

Elliott, a retiree who lives in Pittsburgh and is a Republican with a self-professed affinity for the U.S. Constitution, went up against Robert N. Feltoon, a lawyer from the Philadelphia firm Conrad O'Brien.

Feltoon argued that Elliott's petition should be dismissed. The U.S. Supreme Court has never specifically ruled on whether a person born outside the United States as Cruz was can run for president, he argued. It is a decision, Feltoon said, that should be made by Congress and the Electoral College, which ultimately elects the president.

Elliott's petition was one of several "birther" lawsuits filed against Cruz after GOP front-runner Donald Trump openly questioned whether the Texas senator can serve as president.

TOPICS: Constitution/Conservatism; Extended News; Government; Politics/Elections
KEYWORDS: citizen; cruz; naturalborncitizen; nbc; pennsylvania; tedcruz Navigation: use the links below to view more comments.
first previous 1-20 ... 61-80, 81-100, 101-120 ... 201-204 next last
To: Penelope Dreadful
So Cruz was made a citizen by the authority of Congress, not thru naturalization. I would be surprised if Cruz lost.

Our Constitution gives Congress the power of naturalization. So by definition if one is made a citizen by Congress one is a naturalized citizen.

No, Obama’s term expires Jan 20 2017.
House would vote on top 3 candidates in the Electoral College.

The court delivers a body blow to the birthers and they now pretend that it never happened. The judge applied the law, so they could challenge law if they wish. It won’t go well for them.

Interesting that “some people” believe that, in order to understand the Constitution, you must interpret it in the context of associated writings of the time — letters, Federalist Papers, etc.

But those same people won’t do that when it comes to “natural born citizen”. They just take the phrase and mold it to whatever they want it to mean. This person delves into the Framers’ minds and writings.

I don’t know where you get your info but James Madison stated, “It is an established maxim that birth is a criterion of allegiance. Birth however derives its force sometimes from place and sometimes from parentage, but in general place is the most certain criterion; it is what applies in the United States; ” This was spoken by Mr. Madison on 22 May 1789. 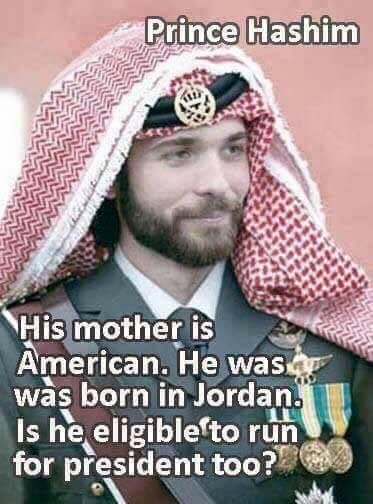 The judge also referred to Breckinridge Long, "A 'Natural Born Citizen' Within the Meaning of the Constitution," 49 Chi. Legal News 146 (1916), which argues quite well that a person born in the US to alien parents is NOT a natural born citizen (this would apply to Rubio); Gabriel J. Chin, "Why senator John McCain cannot Be President: Eleven Months and a Hundred Yards short of Citizenship," 107 Mich. L. Rev. First Impressions 1, upp A at 19-21 (2008); and Isidor Blum, "Is Gov. George Romney Eligible To Be President?" N.Y.L.J., Oct. 16, 1967. None of those references was applied.

The judge did note Mary McManamon, "The Natural Born Citizen Clause as Originally Understood," 64 Cath. U.L. Rev. 317 (2015), but concluded that her view is in the minority among legal scholars.

The judge includes statutory history of naturalization laws to support his conclusion that all citizens at birth are natural born citizens. While he doesn't make note of it, it is a fact that US statutory law makes children of two non-citizen parents, born in Guam, Puerto Rico or the Virgin Islands, US citizens at birth.

On the question of whether or not the court had jurisdiction, the opinion cites Miller v. Albright and Wong Kim Ark, and also points to Hall v. Florida, 134 S.Ct. 1986 (2014) for the proposition that "No natural born citizen may be denaturalized." That statement is a summary of the rule of Trop v. Dulles, 356 US 86 (1958).

Seeing as how the denaturalization of Mr. Bellei in Rogers v. Bellei was upheld (Bellei was born in Italy of a US Citizen mother, and obtained US citizenship under the direct predecessor Act of Congress that provides Cruz with his US citizenship), there is no question that if a court were to faithfully apply the principle stated in Hall v. Florida, in combination with Mr. Bellei being constitutionally denaturalized, it would find that Mr. Bellei, a citizen at birth, can not be a natural born citizen.

He also delivered a body blow to Cruz. The issue of NBC is now judiciable, and another court might find the opposite of what this judge did.

See my post just above which describes the authorities cited by the judge, and the ramifications of actually applying the SCOTUS authorities he cited to the Cruz case. The judge did NOT apply SCOTUS precedent to the question of "natural born citizenship."

I predict this judge's opinion will be dissected by others, and that such dissection and critique will not make the news.

Sources tell KDKA's Jon Delano that Senior Judge Dan Pellegrini of Pittsburgh will be the judge. Whatever the outcome, an appeal to the state Supreme Court seems likely in the case.

Pa. Attorney Challenging Ted Cruz's Right To Run In State's Republican Primary - CBS Pittsburgh - Feb 24, 2016
90 posted on 03/11/2016 4:48:34 AM PST by Cboldt
[ Post Reply | Private Reply | To 1 | View Replies]
To: Ray76
I notice that Pellegrini's opinion, which you linked earlier in this thread, is in the case of Elliot v. Cruz, and not in the case of Farrell v. Cruz. Both cases were scheduled on the same day, and both before Judge Pellegrini.

Do you know if Pellegrini produced an opinion and order in the Farrell challenge?

When 90% of the federal government is extra-constitutional the Republic as created is a failure. Levin has really pissed me off lately but he is right that the only real solution is an Article 5 convention, and that would only be a start.

I’ve answered this for so many folks I can’t recall now if you are a repeat or not, so kindly forgive me if I’ve said this to you before (I hate watching reruns, too), but this is very simple. Queen Noor, at the time of her marriage, relinquished her US citizenship. She had nothing of that to pass on to her children when they were born.

But you touch on an important point. The claim to US citizenship of a foreign born child of an American citizen is a real claim, and it is a claim at birth by natural means (jus sanguinis, right of descent), but it is burdened by suspicion of how much of a nexus the child really has with the American body politic. This is why Congress can and should impose additional regulation (residency requirements, conditions subsequent, etc.), to ensure they really have that connection to being an American. If someone (like Cruz) has met that burden, and that someone actually gets their presidential eligibility case heard on the merits, under current law they are going to be found natural born, and rightly so. But the odds of that ever being tried is almost zero, because of the political question doctrine.

Did she ever give up her U.S. citizenship? I think you have to return and spend a certain amount of time back in the U.S. to retain that right. Something like every five years...? Correct me if I’m wrong. Thank you.

>>> Did she ever give up her U.S. citizenship? I think you have to return and spend a certain amount of time back in the U.S. to retain that right.

I don’t know if she did, or if that is a requirement. I doubt it in both cases. However, citizenship is completely ignored where the father is concerned, making it rather irrelevant.

A simple search will help you out.
Several election committees have ruled such, I know those aren’t courts.
The courts presented to are deeming the case without merit and dismissing.

In Cruz's case, in order for his citizenship to persist, he (the child) is ALSO required to meet US residence requirements (Section 301(b) of the 1952 naturalization Act), specifically a 5 years of continuous US residence (a 6 month absence from the US does not disturb continuity) between the ages of 14 and 23. This aspect of the law has since been repealed, but Congress may add it back in, or change the parental residence requirements (it has changed both of these over the years) associated with descending the citizenship in the first place.

Cruz hasn't proved to the public that he is a citizen in the first place, but I think he is.

>>> In Cruz’s case, in order for his citizenship to persist, he (the child) is ALSO required to meet US residence requirements (Section 301(b) of the 1952 naturalization Act),

And therein lies your problem.

You cited the 1952 naturalization act which grants Cruz status as a NATURALIZED citizen.

You cannot be both.