“Even assuming his “threat” might achieve it’s objective, it is disgustingly unprincipled and should disqualify him from consideration - he is basically saying “Treat me bad and I will gladly fatally damage your cause (and mine) and dramatically increase the probability of having the democratic nominee win”. Is that the kind of person YOU want to vote for?”

Faux outrage on your part. You purists will never ever win in life. Never. And you obviously don’t know the fine art of playing politics. Trump does, and that’s good considering his business background rather than that of slimy politician. I might add, you do realize you are on a website that on any given day, probably on most days, the various members on political threads are threatening to go third party at the drop of a hat? Man, put your specs on. 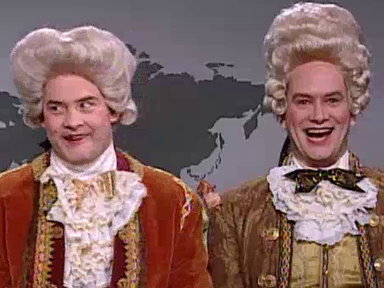 This could have been done differently.

No need for a screed and calling out Jim for this.

I am giving Trump a fresh slate.

The President is not supposed to bring hope and change, or to heal the oceans.

He is the CEO of America.

His job is to protect and defend the Constitution, uphold the laws, and run the government.

Trump could do all of that blindfolded.

I have been involved in construction of buildings in major cities, and to make things happen on time and under budget, there are plenty of challenges. You have to be on the top of your game to play in that league.

So I respect Trump for his accomplishments.

I also respect him for loving my country like I do.

I also respect him for taking on anybody and everybody and for saying the very same things I say each night yelling at my TV.

If he is the nominee, I have no qualms about voting for him.

If Jeb is the nominee, he will not get my vote.

If that means Hillary becomes the President, oh well, as there is not a dime’s bit of difference between the two.

We have been played by the Dems and the GOP-E for the last 20 years.

They are two sides of the same coin.

There are only two men right now that are fighting the DC Cartel—that is Cruz and Trump.

But America loves a fighter, and I want a fighter, so give me Trump, Cruz or any combination of the two, and I am happy.

“Faux outrage on your part. You purists will never ever win in life. Never.
Sacre bleu!”

Yeah, I had to stoop to using a French word. C’est dommage, n’est pas?

A lot of Freepers fit into that category, including yours truly.

The commie brainwashing of the American public began before the majority of us were even born, so yeah, there are a lot of escapees from the liberal mind control plantation now running free in America.

Far be it from an escapee like me to berate a fellow American for having once been fooled by liberalism.

I don’t get it. Why do Free Republic subscribers mention banning posts and people. Isn’t the whole idea behind Free Republic to freely express all thoughts and ideas.

You'd willingly support a pro-abort and a pro-illegal?

231 posted on 07/25/2015 5:12:43 PM PDT by Windflier (To anger a conservative, tell him a lie. To anger a liberal, tell him the truth.)
[ Post Reply | Private Reply | To 117 | View Replies]
To: Lazamataz
However, his CANDIDACY is wonderful. He’s making the Republicans address real issues. He’s changing the dialogue. His refreshing honesty and directness has yielded ever-increasing poll numbers, and may give a lesson to people I do support (Ted Cruz).

232 posted on 07/25/2015 5:14:00 PM PDT by catfish1957 (I display the Confederate Battle Flag with pride in honor of my brave ancestors who fought w/ valor)
[ Post Reply | Private Reply | To 7 | View Replies]
To: Albion Wilde
I don't trust someone who had a conversion to conservatism close to running for the republican nomination. I believe it is opportunistic knowing the energy and anguish on the conservative side.

We can no longer afford to give someone the benefit of the doubt. We don't have that luxury anymore.

Even if he had a conversion recently, I don't think he has had the time to properly flesh out his beliefs and principles. We don't have the luxury of on-the-job growth in conservatism.

A loud mouth, and in the mud fighting is interesting. However, when the rubber meets the road, we need a conservative who is well grounded in his principles, does not need too much guidance, and will be committed to rolling back at least the last eight years of liberal mischief.

Reagan was a reliable conservative before he ran for President. He actually moved the ball with a firm hand for conservatism, without making a lot of loud noise. None of his successors moved the ball for our side, on the other hand, they helped move the ball in the other direction.

As to his failures in California, he was not perfect. However, he was the best conservative available.

I've Been To Zanzibar

I don't think I've seen but two or three posts from John Robinson in all the years I've been reading here -- mostly having to do with breakdowns of the website.

He's not missing. He's just not a regular participant here.

Other than Cruz, so may be Trump.

1.First, I didn't post and run away, as some suggest. I went to dinner with friends.

2. It should be obvious that no disrespect was meant to JR. He acknowledged as much in his reply to me..both in content and tone.

3. I'm amazed at how many of you still will not recognize obvious, in your face facts. After Rudy came out at the debate and said he supported abortion, Jim said that FR could no longer be a platform for advocacy of Giuliani, and banned those who would not adhere to his decision. And I totally respect that decision. It is his alone to make. I stated that several times.

4. Trump is NOT pro-life. You who are now enamored of him because he has shone light on the terrible problem we face with open borders and illegals are still not facing that fact. Trump many, many times said he was a proud supporter of "a woman's right to choose." He will NOT defend the unborn.

I was not posing the question to try and put JR on the hot seat, or to embarrass him, rather to point out that Trump's miserable record on abortion is just as bad as Rudy's..so why on earth are supposedly smart people here all in for him?

We have a superb field of candidates, and now, we Republicans have the political stage to ourselves, to introduce our candidates to the country, and detail our philosophy of conservative governance. Instead, our primary process is about to degenerate into a three Trump circus. He will say something incredibly stupid, and all the other candidates will be forced to respond to whether they agree with him or not.

Trump is a weathervane...he blows whichever way it seems to be convenient. He stands for NOTHING.

He was a REGISTERED DEMOCRAT FROM 2001-2009. He supports Obamacare, whereas all Republicans want to repeal it. And you people are insane enough to be OK with that?

He is twice divorced. He moved his third wife in while the divorce was pending, then gave an interview to the NY POST to proclaim that "this was the best sex he'd ever had."

He is not fit to be President. Period. He is a totally loose cannon.

If we lose this election, it will be due to Trump. Period. Preibus is an ass for not banning him from the debates.

One last comment. As one who has been around here since 1998 ( and thanks to those who were kind enough to recognize my integrity) it's astonishing to where the level of discourse here has degenerated. I won't bother to respond to those of you who post insipid remarks...if you want to be a right wing version of DU or DailyKos, go ahead. Have at it. But don't expect me to dignify your stupidity with a reply.

And just in case anyone is interested, I've stated here several times that my preferred ticket for 2016 is Cruz/Fiorina.

And I bid you all a pleasant evening.

“Faux outrage on your part.”

You don’t know me that well. If you did, you would also know that I am about the furthest thing from a “purist” (a/k/a trolling progressive) on this board.

If the situation in this country is as dire as Trump says it is, here is what he would say:

“Some have suggested that I should consider a third party run if I am not successful in becoming the Republican nominee. Let me be clear: while there may be some philosophical differences between myself and my fellow Republican contenders, those differences seem insignificant when comparing them to the yawning chasm between the core Republican values we share and those held by Democrats. While I believe I can be more a more effective leader, given my background and experience, than my Republican opponents, I would gladly support any one of them against any Democrat nominee because I firmly believe it is progressive, and in many cases unlawful policies, that are the root of the many significant issues facing our country today.”

He won’t say that because it is all about him, and much less about his supposed “convictions”.

I dare say that Reagan was a conservative even when he was a Democrat. Of course, that was during an era when such animals still existed.

Remember he once said, "I didn't leave the Democrat party - they left me."