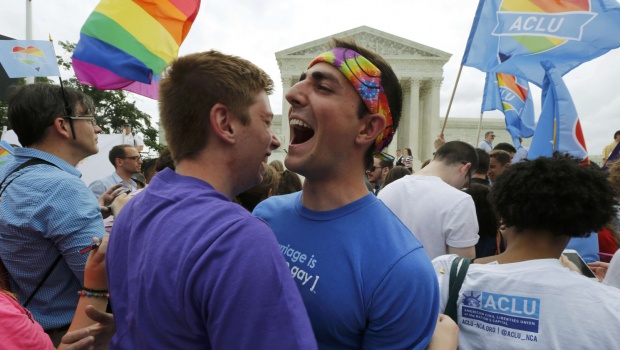 If prayer were the answer, the first roberts would not have been made. There were prayer requests and prayer vigils and actual prayers that apparently were not answered.

Watch for it. Buy your popcorn now.

Kennedy addressed that subject in the opinion. He said religious leaders would not be forced to perform same-sex ceremonies because they have a 1A right to religious objection. He did not address bakers & florists, etc.

We all know what happened after the Romans conquered the Carthaginians (and what they were known for)...Now, we get to relive history because we learned nothing from it other than to repeat the mistakes of the past. We get to party like it’s 410 AD and 455 AD all over again. Celebrate vice and punish virtue...that’s great...way to go. Now it’s just a matter of time.

This is the end ~ The Doors

The Supreme Court can no more repeal the laws of nature and God on marriage than it can the law of gravity.

Americans had better awaken from their narcotic-induced sleep and do something significant about this central socialist government and it’s convoluted system of courts.

- If you are black, hispanic or some other racial minority
- If you are female (and a feminist)
- If you are gay homosexual
- If you believe in global warming
- If you have enough money to buy power/decisions in your favor

HOMOSEXUAL, because there's nothing GAY about it.

89 posted on 06/26/2015 8:25:38 AM PDT by GOPsterinMA (I'm with Steve McQueen: I live my life for myself and answer to nobody.)
[ Post Reply | Private Reply | To 1 | View Replies]
To: bert
There were prayer requests and prayer vigils and actual prayers that apparently were not answered.

Oh, they were answered, but the answer was "no" or "not yet".

“Kennedy addressed that subject in the opinion. He said religious leaders would not be forced to perform same-sex ceremonies because they have a 1A right to religious objection. He did not address bakers & florists, etc.”

This issue will be back in the court. Lets se what this POS Kennedy has to say then.

Bakers and Florists whom object should become ordained ministers, maybe that is a work around. They can advertise they are a Full service Bakery lol. I’m only halfway kidding.

The end of the age of grace is near.

At first I was bummed, but now I understand....

"10 And he said to me, "Do not seal up the words of the prophecy of this book, for the time is near. 11"Let the one who does wrong, still do wrong; and the one who is filthy, still be filthy; and let the one who is righteous, still practice righteousness; and the one who is holy, still keep himself holy." 12"Behold, I am coming quickly, and My reward is with Me, to render to every man according to what he has done.…

Soooooo...as long as we keep ours and ourselves clean, we're good. Just shun the homos as much as possible so you don't get defiled by them.

The bigger issue is that donations will no longer be tax deductible. This is HUGE.

Filthy mud humpers..The fact that faggots merit any kind of political discussion in this country is almost as bad as the ruling itself.

95 posted on 06/26/2015 8:35:18 AM PDT by Quickgun (I got here kicking,screaming and covered in someone else's blood. I can go out that way if I have to)
[ Post Reply | Private Reply | To 1 | View Replies]
To: longtermmemmory
this is not about government making god. This is about government being god.

So true, and it won't be long before they start finding ways to eliminate any kind of threats to their golden calf.

If anyone here has battled any liberals/progressives, in recent times, and see how vile their posts are, they are capable of just about anything to protect this arrogance.

96 posted on 06/26/2015 8:35:25 AM PDT by Conservative Gato
[ Post Reply | Private Reply | To 54 | View Replies]
To: Patriotic1
The bigger issue is that donations will no longer be tax deductible. This is HUGE.Imagine what NYC is going to be like when the homeless shelters and soup kitchens have to shut down. They're all run by Christians.
The poor will no longer have their thrift stores or food pantries, because they're Christian.

Will the homos provide all these things for the poor and needy from now on?

Sleepy Americans, awakening from their naps had somehow convinced themselves this day would never come.

Some of us might have expected a couple more years before it happened, but many evangelicals deluded themselves into thinking it would just never happen.

Get behind a third party that will sap votes from our single party system and cleanse our nation of ALL the evil therein.

Roberts ONLY voted the way he did because his vote wasn’t needed.

This country is doomed, officially, it’s doomed. Black robed tyrants have now sealed God’s judgment upon us. There is no other way to look at it.