Weather station a few blocks away was recording 87 degrees with a 76 dewpoint (70% humidity) (i.e., stifling, tropical-like heat) when he walked into that church. Was still 85 degrees when he walked out. That’s not sweater weather by any stretch of the imagination.

Yeah that pic of him in the woods is creepy. He’s making the same face as the crazy guy from Full Metal jacket!

The fact that he sat in there for 40 minutes or so meant that everyone saw him. He left DNA there. Having attended a few sessions of an AME Zion church, I can assure you that he “stood out.”

My eagle scout project was helping a AME Zion church re-open a camp for city kids. They had me as their guest several times. You will never meet a nicer group of people and, in my experience, they were the most passionate and pacifist people I have ever spent time with.

Trust me, when I attended church there, a lily white teenager in 1976, I could see my name on the lips of the congregants as I walked up the aisle.

They knew this kid. And this was personal. And planned.

Well, as it turns out, the guy actually DOES look a little like Opie from the Andy Griffith Show. But he certainly didn't look anything like him in any of the surveillance photos, original OR the updated.

Here below is the original surveillance which showed what first appeared to be a large nose.

And here below is the updated photo with a rather small nose.

Finally, a clear pic of the suspect (below), looking more like Opie than in the earlier photos. 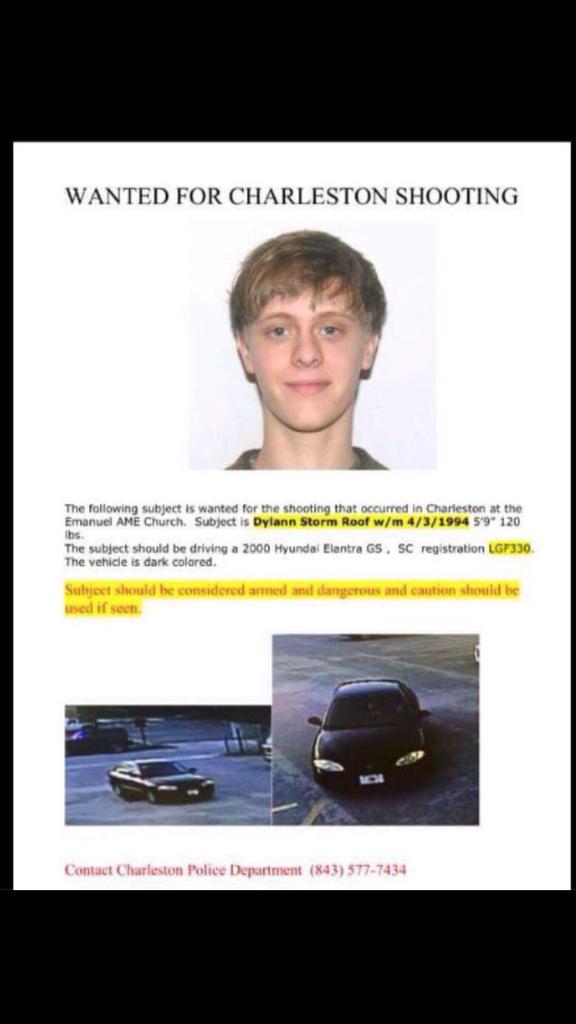 Most black people wouldn't go to a church and do something like this, too scared of big mamma! Now killing another black person on the streets, that's a different story!

Wanted poster says 5’ 9” 120 lbs. He is wearing something under that shirt, When I was that size, I was very skinny.

With clear grill and wheel cover photos, ID of car is much easier.

And you are beyond redemption. Shut up and stop stalking me through the threads.

Clearly white. Clearly girly. Prison time will not be kind to this little punk.

You can tell by that picture of him in the wood he comes from money. Mark that down. Just a crazy ass drug addicted nutcase. A spoiled rotten brat. I no more believe it was a “hate crime” than the man in the moon. He could have been in a church full of white people and I guarantee you the same thing would have happened.

I don't think anyone here had any trouble believing he could be white. After all, Obama's buddies from the 1970s terror group, the Weather Underground, Bill Ayers and Bernardine Dohrn, are both white. As were a long list of far left shooters, bombers, and other assorted terrorists. It just wasn't clear from those sh*tty surveillance photos that this punk was white, original or the updated. Most of these characters turn out to have had far left political viewpoints.

352 posted on 06/18/2015 7:46:08 AM PDT by ETL (ALL (most?) of the Obama-commie connections at my FR Home page: http://www.freerepublic.com/~etl/)
[ Post Reply | Private Reply | To 317 | View Replies]
To: ForAmerica
Most black people wouldn't go to a church and do something like this, too scared of big mamma! Now killing another black person on the streets, that's a different story!

I'm not at all sure he's African-American/Black, but if it's the person in the security cam photos, he doesn't look white. Aren't there any Asians and Hispanics in South Carolina? Isn't the Governor Asian?

I'm not "stalking" you through the threads. I was reading the threads about this shooting, and your idiocy re: Sandy Hook stood out. You go around telling parents who lost their six-year-old children that they are just making it up, and you say that I am "beyond redemption"? That's pretty messed up, guy.

The patches are the old South African flag and the Rhodesian Republic flag. Which makes this guy a fringe white supremacist...

I disagree. I think he’s parents will turn out to be liberals. Dylan is a favorite name of liberals and the middle name is pure liberal yuppie garbage. I also think he came from money.

Old:
Can you please put me on that list you keep of Freepers that dislike you?

True... although I doubt he'll be taken alive.