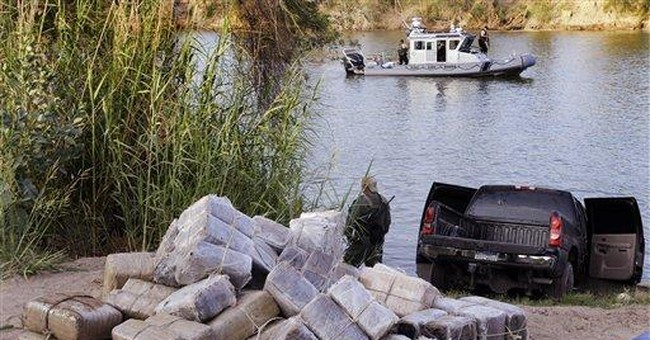 A pair of decisions handed down by federal appeals courts in the last month highlight two telling pillars of recent U.S. national security strategy. They are: open our border and collect everyone's phone records.

In Texas v. U.S.A., the U.S. Court of Appeals for the 5th Circuit refused to allow President Obama to move forward with his plan to unilaterally grant legal status to as many as 4.3 million illegal aliens.

The court was incredulous. In Texas, it noted, the state would need to absorb a cost of $130.89 for each driver's license it issued to a person in this country illegally who was amnestied by Obama or else change its driver's license law.

"A plaintiff suffers an injury even if it can avoid that injury by incurring other costs," wrote Judge Jerry Smith, a Reagan appointee. "And being pressured to change state law constitutes an injury."

Obama's amnesty, of course, would injure all Americans, not just those in the 26 states that sued to stop it.

The amnesty, the court said, would declare millions of illegal immigrants "lawfully present in the United States."

"That designation makes aliens who were not otherwise qualified for most federal public benefits eligible for 'social security retirement benefits, social security disability benefits, [and] health insurance under Part A of the Medicare program,'" said the court.

In short: Obama's unilateral declaration would give up to 4.3 million illegal immigrants a right to compete for jobs with U.S. citizens and permanent legal residents and make them eligible for Social Security, Medicare and disability programs that are already helping push the nation toward bankruptcy.

This, the court countered, would contradict "the constitutional imperative of 'a uniform Rule of Naturalization.'"

"Further," said the court, "there is a substantial likelihood that a partial injunction would be ineffective because DAPA beneficiaries would be free to move between states."

Is it possible the administration believed a foreign national who had crossed the international border to live illegally in Texas would not cross from Texas into another U.S. state so Obama could grant him amnesty?

"The metadata concerning every telephone call made or received in the United States using the services of the recipient service provider are demanded, for an indefinite period extending into the future," wrote Judge Gerard Lynch, an Obama appointee, in explaining the administration's policy.

"If the government is correct, it could use (Section) 215 to collect and store in bulk any other existing metadata available anywhere in the private sector, including metadata associated with financial records, medical records, and electronic communications (including email and social media information) relating to all Americans," said the judge.

"Such expansive development of government repositories of formerly private records would be an unprecedented contraction of the privacy expectations of all Americans," he said.

Is it ironic that an administration that was arguing in one court that it has the authority to exempt foreign nationals from obeying the laws of the United States when they are in United States was arguing in another court, at the same time, for what could amount to "an unprecedented contraction of the privacy expectations of all Americans."

Or does it merely show an unprecedented contempt for the rule of law and the liberty of citizens?

TOPICS:
KEYWORDS: aliens; bordersecurity; nsa
1 posted on 06/03/2015 10:59:24 AM PDT by Kaslin
[ Post Reply | Private Reply | View Replies]
To: Kaslin
The administration argued that Texas and 25 others states that sued to stop Obama's plan did not even have standing to challenge the action

Roll that around for a moment. The "administration" says that a majority of the sovereign States don't have standing to question the Imperium's rulings which don't even have the concurrence of the Congress.

Breathtaking. A government formed by the states and supposedly directed by representatives from the states now claims absolute and imperial, indifferent authority.

Which means, take whatever makes sense and actually “works” in reality,

and do or advocate the opposite,
and you have the leftist mindset.

This has been my issue all along. Our government created the situation that they use to justify the domestic spying.

I would be a lot more impressed if Rand Paul had addressed this.