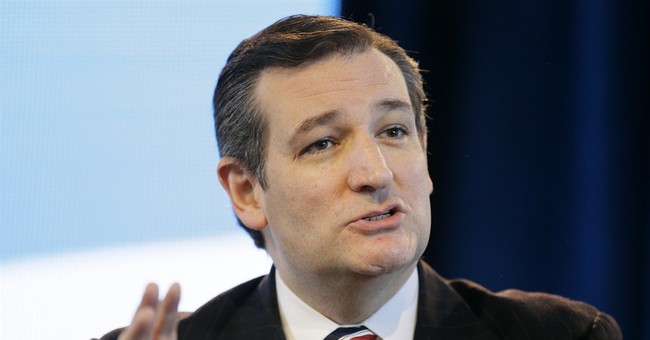 Yesterday Texas Senator and GOP presidential candidate Ted Cruz announced he was signing his family up for Obamacare. As required by law, he has to. Just like millions of other Americans, the choice is get insurance coverage or be fined for not having it.

"We'll be getting new health insurance and we'll presumably do it through my job with the Senate, and so we'll be on the federal exchange with millions of others," Cruz said in an interview with CNN Tuesday.

Cruz and his family currently have health insurance coverage through his wife’s employer, Goldman Sachs. Cruz's wife, Heidi, is a managing director at the company and will take a leave of absence to campaign for her husband, causing her family to lose their healthcare coverage, according to CNN.

Naturally because of Cruz' extensive work to repeal Obamacare during his time in the Senate, which included a 21-hour filibuster about the legislation, the media and its liberal think tank counterparts are freaking out and calling Cruz a hypocrite.

It's "Mitt Romney put his dog on the top of the car, what a terrible person," all over again.

Meanwhile, Secretary of State Hillary Clinton may have broken federal records laws in an effort to evade transparency with the American people after doing all of her official business from a private email server and the press thinks it's hilarious.

I'm no Ted Cruz fanboi, but this argument that a Presidential candidate should be mocked for following the law is tendentious and silly.— Rick Wilson (@TheRickWilson) March 24, 2015

The Chuck Norris of the 2016 campaign season.

“...And he can show how pathetic O’care is by posting a diary of his daily experiences with this idiotic legislation.”

That was my first thought. Now, not only can he speak as a legislator that is in favor of repealing this law based on anecdotal information from constituents, NOW he can speak with authority from his own PERSONAL experience!!!

I truly thought that this was why the media was upset about this. They know there is no way that Cruz will be quiet about this on the campaign trial, and his personal experience with the Obamacare system will lend credulity to his statements. :-)

22 posted on 03/25/2015 10:42:39 AM PDT by MNGal
[ Post Reply | Private Reply | To 7 | View Replies]
To: Kaslin
One wonderful facet of the Cruz campaign is that he now has a platform to engage the man-child directly. Zippy is simply incapable of engaging with Cruz, except indirectly. And even that strategy won't help.

This will be fun.

I am beginning to really like the way Cruz plays with the MSM. He is driving them insane. All he did is sign up for the Senate coverage when his wife took a leave of absence. And since she lost the family coverage, he signed up through the Senate, which is now part of Obamacare. A story made out of NOTHING. But the MSM is BORED so...

Hahah, yep that’s how it seems to be!

Not bored, just stupidly stuck in their hate for the right.

The surest way to demonstrate how a bad law has serious flaws and inconsistencies, is to fully implement its provisions, just as they are written. I am sure that Ted Cruz is well aware of the deficiencies and inadequacies as written into the law, but the law also says he has to enroll.

The probability, no, the certainty, that the Family Cruz shall not actually USE the “benefits” provided under the policy that he shall be issued, but probably end up paying out of pocket for ALL of medical expenses, brings up the absolute futility of trying to make a real insurance policy out of this scheme. It is a wealth transfer device, and NOBODY actually ends up claiming benefits.

A Major Medical insurance policy, and a Health Savings Account, would provide vastly more coverage, at less out-of-pocket cost, for almost all of US citizens, cheaper, and tailored to the specific needs for the individual families.

The few that remain, that have neither taken care of their insurance coverage needs, nor chosen to forgo coverage altogether, could then apply for a welfare benefit to cover extraordinary medical costs, and a special supplementary appropriation made to cover these improvident souls.

This is going to provide many angles of attack for Cruz:

Cruz can also show how Obamacare has personally cost him more, left him with less coverage, and caused general inconvenience.

The fact that congress, staffers, Obama and his family have not signed up shows how Democrats and Republicans exempt themselves from following the law as written for the rest of the country. (through executive order this time).

Why didnt he just buy a private plan to show America that you don’t need a government agency to buy insurance? Missed opportunity.

Federal Healthcare Law, Media Freaks Out, hosepipe wrote:
Obama is NOT SIGNED UP for Obama-Care..

WRONG ....Obama is exempted first of all

Originally members of the House and Senate and staff members with the exception of those who participated in constructing (writing) Obamacare were supposed to be in it.

By edict Obama changed that which is one of the objections Justice Hanen ruled on and is going to review on April 17th by the 5th district Appealate review court.

Obama changed it because the democrat (in name only) party leader in the Senate which controlled it until this year complained and insisted exemptions be made for members of the House and Senate and their staffs would have to have it deducted from their salaries.