Americans of all political persuasions are coming to the sad realization that our First Lady -- a woman of undoubted talents who was a role model for many in her generation -- is a congenital liar.

Drip by drip, like Whitewater torture, the case is being made that she is compelled to mislead, and to ensnare her subordinates and friends in a web of deceit.

1. Remember the story she told about studying The Wall Street Journal to explain her 10,000 percent profit in 1979 commodity trading? We now know that was a lie told to turn aside accusations that as the Governor's wife she profited corruptly, her account being run by a lawyer for state poultry interests through a disreputable broker.

She lied for good reason: To admit otherwise would be to confess taking, and paying taxes on, what some think amounted to a $100,000 bribe.

2. The abuse of Presidential power known as Travelgate elicited another series of lies. She induced a White House lawyer to assert flatly to investigators that Mrs. Clinton did not order the firing of White House travel aides, who were then harassed by the F.B.I. and Justice Department to justify patronage replacement by Mrs. Clinton's cronies.

Now we know, from a memo long concealed from investigators, that there would be "hell to pay" if the furious First Lady's desires were scorned. The career of the lawyer who transmitted Hillary's lie to authorities is now in jeopardy. Again, she lied with good reason: to avoid being identified as a vindictive political power player who used the F.B.I. to ruin the lives of people standing in the way of juicy patronage.

Someone should write the book, based on publicly proved sources entitled: 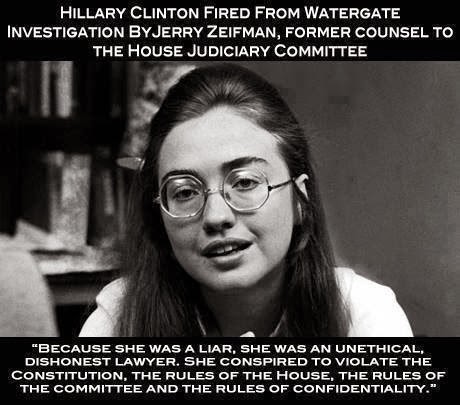 Yeah, we need a lifelong, bonafide liar as president. Again.

4 posted on 03/11/2015 6:40:14 AM PDT by Slyfox (I tremble for my country when I reflect that God is just: that his justice cannot sleep for ever)
[ Post Reply | Private Reply | To 1 | View Replies]
To: doug from upland
Americans of all political persuasions are coming to the sad realization that our First Lady -- a woman of undoubted talents who was a role model for many in her generation -- is a congenital liar.

If only we had access to all the microphones and transmitters currently in the hands of Liberal Democrat Union members who live in New York and run the "news" services.

We might be able to inform the public about what a liar she is! As it is, most of the public doesn't read this website, or anything else which will inform them as to the truth.

Don’t tell just one whopper. Regale your audience with an absolute excrement-storm of howlers. Then, instead of proving you wrong, they’ll maybe just give up.

good point.
the young voters of today - 18 to 35 to 40 years old, have little or no clue about the clintons.
DFU has a nice arsenal but how do we get MSM to use it to do a “let’s go down memory lane” series to inform these kids about the Clinton’s ?

A Clinton history lesson — WE DIDN’T START THE FIRE

So many know and yet they don’t blow the whistle on all our corrupt politicians.