A Fish and Wildlife official near Paris, Kentucky responded to the call about a young male mountain lion in a tree and though it best to 'dispatch it.'

Once native to the state, cougars have not been spotted there since before the Civil War.

An agency spokesman said, 'it seemed to be in very healthy condition' and that shooting it was the proper course of action

An examination of a mountain lion killed by a Kentucky Fish and Wildlife official has found that it was a 125-pound male that appeared to be young and healthy.

A young male mountain lion was spotted in a tree by a farmer. That was historic. No mountain lion had been seen in Kentucky since before the Civil War. Over 150 years ago.

The farmer called Kentucky Fish and Wildlife. An officer responded and decided it would be best to dispatch the animal, so he shot it. Dead. Out of the tree.

It was a healthy young male.

Looks like a painter in that there tree, Officer Clem.

My great-great-great-great grandpaw Zeke done shot one near the old Parkswell scuppernong vines in the summer of ’49, before the Late Unpleasantry. The family done et it.

Yep. Waste not, want not. Said it tasted like possum.

Reckon I oughta 'spatch him.

How’s the wife and young-uns?

Well, you tell him I said he better not let her go. She comes from a fine family and she makes a good blueberry pie. I et a slice a hers at the county fair last summer. And looks ain’t everything, God bless her. That good eye’s awful purty.

I’ll tell him, but he’s dumber than a barrel of hammers.

Apple don’t fall far, Skeeter. Say, I have three rounds left. You got any dogs around here?

No sir, Officer. You sure that painter's dead?

Either that, or he's pining for the Licking.

Yep. Say, you wanna join us for supper? We’d be honored.

[Eyeing dead mountain lion] I reckon I might, Skeeter. That Becky of your’n makes a fine mess ‘o vittles.

If i lived in Kentucky, and if i saw a mountain lion, and if i shot that lion — i bet a wildlife official would screw me six ways to sunday. 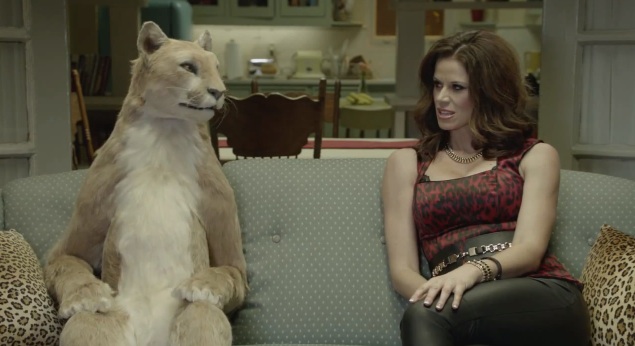 'This state ain't big enough for the both of us.'

I saw one in W. Va. a few years ago (yeah, I know, there are none east of the Mississippi). When I first saw it, my mind couldn’t process what I was seeing, and the only thing I could think was that it was a Great Dane — the long, tan back being the first thing I noticed. Then I thought it was too short to be a Great Dane, and too long. And then it faced me, and I realized it was a little too feline to be a Great Dane. Magnificent animal, and me without a charged up cell phone.

Yep, that’s the redneck solution to any animal in a tree.

Sounds like someone may be quietly reintroducing them. I wonder who that would be?

People have been seeing the occasional mountain lion up here in New England for several years. However, according to Fish and Game that was impossible. Then about 2-3 years ago some hit one with their car in Greenwich, CT(30 outside of NYC). Again, the authorities said it must have been some ones pet that escaped. When they did the autopsy they traced its DNA back to the Black Hills of SD. It had apparently been wondering east for 2 years. They confirmed it with DNA from various scat that had been collect across the Midwest.

We have one here in Northern Virginia about 60 miles west of DC. Has been spotted by dozens of people, chasing deer down. The scuttlebutt is some biologists are releasing them in various areas. Although these are government employees, it is being done on the QT to avoid legal complications if (when) a human is attacked. Not satisfied with social engineering, some are delving into a bit of environmental engineering...

Late ‘90’s, three of us driving west on US 33 just east of Harrisonburg, VA - I was driver. Mountain lion crossed the highway just in front of us right after we went over peak of Blue Ridge Mountains, Skyline Drive.

I think at about the same time I saw mine, a number of reports were made from the area. Fish and Game insisted it couldn’t be a cougar, and said it was probably a bobcat. Ridiculous (and vaguely insulting), but for some reason they just don’t want to accept that cougars do come east every so often, and there may be active populations.

And here I was, thinking someone would post a
“not guilty”
for a forgotten muscle car.

19 posted on 12/19/2014 6:35:45 AM PST by Cletus.D.Yokel (Catastrophic Anthropogenic Climate Alterations: The acronym explains the science.)
[ Post Reply | Private Reply | To 13 | View Replies]
To: Lurkina.n.Learnin
Sounds like someone may be quietly reintroducing them. I wonder who that would be?