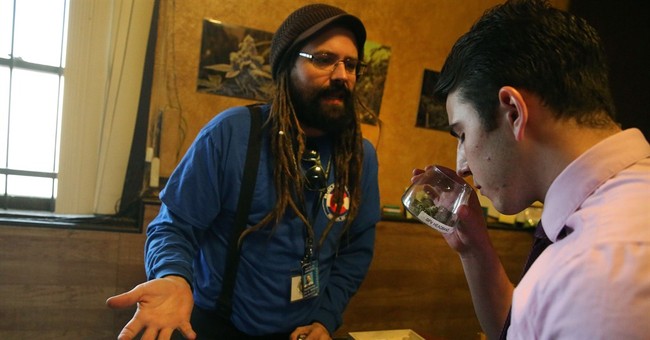 That was before America was a welfare state. If 47% percent are paying no taxes and 47 million are on food stamps now, wait 20 years. When half of the next generation of American children is raised by semi-conscious potheads and are abusing pot by the time they are 9 years old, 70% will be paying no taxes and there will be 100 million on food stamps (and weed stamps).

The only possible bright side is that the small minority of us who remain straight, sober and armed might be able to easily take back America from these hoards of brain dead sissies.

Please show me the federal government’s Constitutional authority to instigate the ‘War on Drugs’.

Legal pot is a great strategy to bring more Democrats into Colorado. As if there weren’t too many already! Thanks for nothing California.

I see more than enough hyperbole to go around on both sides. The idea seems to be that whoever can come up with the biggest bucket of pejoratives wins, and while it might be good entertainment it’s a sorry assed way to make public policy.

Don't try to change the subject to avoid the issue.

Please show the Constitutional authority to instigate the ACA.

I won't play the stupid tit for tat game with you, the subject was the War on Drugs.

Please read the article. They tried to go the “medical marijuana” route and have had their application stuck in bureaucracy. They resorted to buying legal recreational marijuana - hence the crackers as well as other delivery forms.

How do you think that we got to high numbers of people on social welfare of some sort now. We have had a breakdown of family from many sources, including the use of legal intoxicants - alcohol.

I choose to live my life intoxicant free, do not drink, smoke tobacco or pot, but if that makes you happy, more power to you as long as you are not infringing on my happiness or safety.

We found a Witch! Burn her!

Isn’t that something surfers used to say?

I have never surfed... other than the Web... Not a big ocean kinda guy; can’t stand the thought of things swimming around under me with teeth, in their element...

There's still sharp things at the bottom. The only difference is they don't come to you, gravity will take you to them :).

Thought this was interesting

Epidemiology[edit]
Cannabinoid hyperemesis was first reported in the Adelaide Hills of South Australia.[1] Since then, several cases have been recognized worldwide.[4] Cannabis is by far the most widely cultivated, trafficked and used illicit drug. In the present decade, cannabis use has grown more rapidly than cocaine and opiate use. The most rapid growth in cannabis use since the 1960s has been in developed countries in North America, Western Europe and Australia. Cannabis has become more closely linked to youth culture and the age of initiation is usually lower than for other drugs.[5]

Clinical presentation[edit]
Cannabis has been used recreationally for millennia. Some chronic negative health effects of the drug have only recently surfaced. The long-term and short-term toxicity of cannabis abuse is associated with pathological and behavioural effects leading to a wide variety of effects on the body systems and physiologic states.[2] The phenomenon of cannabinoid hyperemesis and clinical diagnosis remained obscure until recently even though its features were beginning to be understood by leading physicians worldwide. In spite of these early reports, uncertainty remained among the doctors and scientists regarding the existence of the cannabinoid hyperemesis syndrome.[6] Sontineni and colleagues (2009) discuss the cannabinoid hyperemesis syndrome to offer guidelines for the clinical diagnosis.[2] The “suggested criteria for the diagnosis” are: Essential feature: 1) history of regular cannabis use for years; Major clinical features of syndrome: 2) severe nausea and vomiting, 3) vomiting that recurs in a cyclic pattern over months and 4) resolution of symptoms after stopping cannabis use. In addition diagnosis has supportive features of - 1) compulsive hot baths with symptom relief; 2) colicky abdominal pain; and 3) no evidence of gall bladder or pancreatic inflammation. Since the publication of these clinical guidelines, the syndrome is more easily recognized and treated. A series of 98 cases and review suggested modifications to original set of criteria that are listed below.

Resolution of symptoms after stopping cannabis use.

No evidence of gall bladder or pancreatic inflammation

Modified criteria for the diagnosis of “cannabinoid hyperemesis syndrome”[3]

Relief of symptoms with hot showers or baths

Weekly use of marijuana.

Pathogenesis[edit]
Various pathogenic mechanistic theories attempting to explain symptoms have been put forward. These theories fall into two themes: 1) dose dependent build up of cannabinoids and related effects of cannabinoid toxicity, and 2) the functionality of cannabinoid receptors in the brain and particularly in the hypothalamus (which regulates body temperature and the digestive system). But the mechanisms by which cannabis causes or controls nausea and the adverse consequences of long-term cannabis toxicity remain unknown and organic disease should not be ruled out as a possible cause.[7]

The neurobiology of the compound has led to the discovery of an endogenous cannabinoid system.[8] The therapeutic potential of cannabinoids has been recognized and these compounds are utilized as anti-emetics. Several studies have demonstrated the therapeutic effects of cannabinoids for nausea and vomiting in the advanced stages of illnesses such as cancer and AIDS.[5]

Haha! Yeah for sure, brother!!! The first step IS a doozy sometimes...

I like my feet firmly on the ground, a pack and a rifle on my back, a good sidearm on my hip, and the wind blowing through the trees.

And if it comes down to meeting up with some critter bent on making me into lunch, at least “Ol’ Painless” in .45-70 will be an equalizer...

interjection
(a yell of exhilaration, mainly used by surfers.)

Etymology: from Chief Thunderthud on the Howdy Doody Show

Are we here to get the federal government back into compliance with the Constitution or just arguing over how best to abuse it?

I remember “cowabunga” from “Snoopy” in the Charlie Brown cartoon strips...

Howdy Doody was right before I was born. But I’ve seen clips of that show on YouTube.

Kids were more innocent then... allowed to BE kids...

Oh we are clear alrigtht. I caught the /s. Didn’t take long though for the drug police to arrive as you mentioned.