“Read the comments. They are going to be very interesting. The mods at CNN.com will be very busy for awhile”

The mods here won’t have it any easier. I can’t wait for the next 20 pages or so of the standard “[i]the blacks[/i] didn’t know how good they had it under apartheid” nonsense, that kicks around on FR whenever Mandela makes it into the news.

I bet the Mandela movie that’s out now will win multiple Oscars...sort of like the Oscars that fagfest “Milk” won (and screwed Clint on ‘Gran Tornino’). Watch. The leftists deify their idols and Mandela was one of theirs. 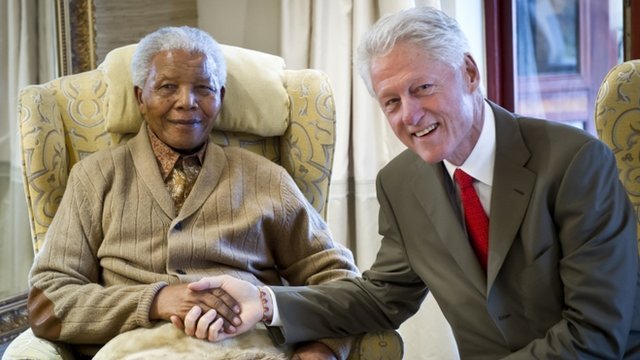 An American president with a commie terrorist.

65 posted on 12/05/2013 2:34:56 PM PST by Vendome (Don't take life so seriously-you won't live through it anyway-Enjoy Yourself ala Louis Prima)
[ Post Reply | Private Reply | To 1 | View Replies]
To: Impy
I don’t want to be crass but the man was a terrorist and commie who did more harm to the future of his people than any racist Boer ever did.

The whips and chains of the Boers (well, the Jim Crowish regime) never did the black people as much harm as their pity parties. It's well for any people (we too... this is not a race specific thing) to note that they are needy people; it's wrong to take the idea that anyone but God can effectively do something to help it.

Any prominent Republican or conservative who doesn’t show up at the funeral will be branded a racist. Obviously.

ESPN (for some reason they have British guys on) is talking about the bastard right now in glowing terms. Disgusting.

Most Americans have no idea who this much celebrated piece of crap really was.

Conservatives are more nuanced than that, Yce.

They note that to jump from apartheid to black supremacy was to jump out of the frying pan into the fire. From bad to worse. Mandela could have been gracious and turned the glory to God... which would have been a segue to racial harmony... but did not. He was selfish and wanted idolization.

I simply do not care. Sorry.

I’ll be watching DVR’d stuff tonight and tomorrow I see.

Obama will send Biden to the funeral and invite the entire GOP leadership to ride along on Air Force II.

Question would be: Why did he turn to terrorism against innocent civilians? Was involved in blowing up a night club that killed 23 men and women.

Two “Black” presidents in one picture.