SAN ANTONIO (Reuters) - Republican U.S. Senator Ted Cruz, a favorite of the conservative Tea Party movement, returned home to a rousing welcome in Texas on Saturday after his attempt to derail Obamacare with a shutdown of the federal government led to sharp criticism of his tactics as reckless and futile.

"After two months in Washington, it's great to be back in America," Cruz joked in speaking to a crowd of about 750 people in a packed downtown San Antonio hotel ballroom.

Cruz was greeted with an eight-minute standing ovation in an appearance organized by the Texas Federation of Republican Women. People in attendance, many of them wearing red to show their support for keeping Texas a conservative-leaning state, lined up to greet him.

Wish I could have been there. I like Ted Cruz more every day! 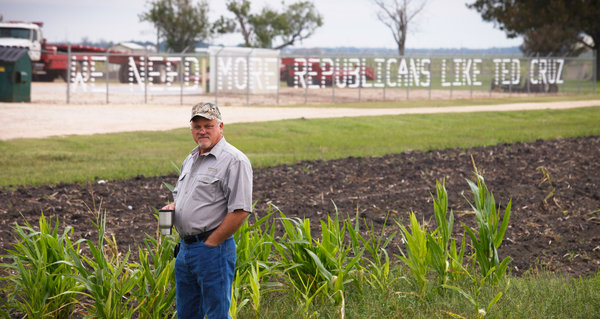 ".........Drivers speeding down a busy highway about 70 miles outside Houston have been greeted with two blunt messages that Bruce Labay put up at his oil field services business. One declared that Mr. Labay was tired of softhearted Republicans, though he used a more colorful adjective. The other read, “We Need More Republicans Like Ted Cruz.”

Mr. Labay, 55, made his signs by sticking 1,200 plastic foam cups, one by one, into the loops of his chain-link fence, a 90-minute project that filled much of the fencing around BL Oilfield Services in the town of El Campo.

I disagree with Lindsay. Cruz is getting standing ovations from his constituents. McCain is getting anger from his and Graham is getting a primary challenge. Screw the polls. The story on the ground is what counts.

Imagine how long of a standing ovation he would have gotten if he wasn't hated so much by his constituents .../ S

9 posted on 10/20/2013 2:03:50 PM PDT by Popman (Liberal wars are about killing people for humanitarian reasons...)
[ Post Reply | Private Reply | To 1 | View Replies]
To: Cincinatus' Wife
"After two months in Washington, it's great to be back in America," Cruz joked in speaking to a crowd of about 750 people in a packed downtown San Antonio hotel ballroom.

GMTA! I often remark that I am hopeful of heading back to the United States from Red Hampshire in the near future...

“......Bash asked Cruz if he believed that Health and Human Services Sec. Kathleen Sibelius should resign. Cruz replied that he believed she should. Bash questioned him about the politics of that. She asked, if Sebelius is such a liability for the Obama administration, whether Republicans benefit more from her remaining in her position.

“There are Republican gray beards that make the point, ‘Let’s let this collapse,’” he said.

“And they think you’re stepping on the message,” Bash added.

“I profoundly disagree with the message,” Cruz shot back. “I want to step on the message.”

“I consider that very — the Bad Samaritan theory,” he continued. “Basically inflict a bunch of harm on the American people and hope we benefit politically from it. What a terrible, cynical approach.”

“I’m not interested in seeing the American people suffer just because my party might benefit politically if they blame the Democrats for the foolish policies that have been imposed,” he concluded.”....

Obama never got an 8 minute ovation, even his sycophants know he is a complete farce of a human being.

We’ve got your back, Senator.

Quote from a CNN news spot, “Ted Cruz was the most conservative candidate on the ballot and the formula worked!”