Just hours after debuting online, the new marketplace for Obamacare has apparently crashed.

Consumers are supposed to use Healthcare.gov as an outlet to sign up for coverage, but just after selecting the state where we wanted to enroll, an error message popped up citing heavy traffic from too many visitors.

We tried to engage a customer service representative via the site's Live Chat feature, but after 15 minutes of waiting and no response, we gave up.

We're not too fussed. Kinks are bound to happen this early in the site's roll out, and at least heavy traffic signals that consumers are eager to find out more about the new exchange.

If you'd like to read up on how the new health care exchange works, you can access this FAQ from the site perfectly fine.

I’ve been doing that all morning here in Texas and it just leads to the error message. We need to be all be doing it daily from here on out whenever we can, lol!

I was really disappointed when these crashes happened. I was looking
forward to seeing and hearing the reactions from some of the dim freeloaders I know when they find out just how “free” and “affordable” their Dear Leader has made their mandatory obligation to buy healthcare. John Roberts was right. It’s just a tax. The healthcare part was a hoax.

Keeping track of whether Obamacare is working or not is a distraction from the more fundamental fact that it is bad law, immoral, destructive of freedom, opposed to God. Treating it as a question of functionality is a subtle way to accept the premise of its existence, as if to say, if it proves efficient, then it must be OK, a false conclusion.

It seems that Day One of the Obamacare exchanges wasn’t a day when the program was ready for primetime:

Tweets from all over the internet:

The Michigan Health Exchange seems to be working as well as we all thought #trainwreck http://t.co/1eKrPTIJAR

Hopped on the health care exchange a few minutes ago, got this message. Still waiting. pic.twitter.com/chHlsaBRN6

Tried three times to get into health exchange. Three messages telling me system’s down.

Officials are saying the crashes are due to the “tremendous response.” President Obama meets in the Oval Office today “with Americans who will benefit from the opening of Health Insurance Marketplaces and being able to comparison shop for the health plans as a result of the Affordable Care Act.”

Not for my state -- New York. Here's what I'm getting just now:

Unfortunately, Obama will just spin this to say “see, everyone wants this - so many people needed this that it crashed - see I was right”

I think they’re using the Java Spring Framework for their site in New York’s Healthcare exchange.

Here’s the error message I’ve been getting for the past hour when I click on the GET STARTED button:

And how many years did they have to prep for it? another example of O’s leadership skills.

It seems some of the sites are running apache and some are running IIS based on the return errors. The problems are only going to get worse as there seems to be NO standardization.

32 posted on 10/01/2013 9:31:10 AM PDT by Ghost of SVR4 (So many are so hopelessly dependent on the government that they will fight to protect it.)
[ Post Reply | Private Reply | To 25 | View Replies]
To: SeekAndFind
New Jersey is still down.
You can get as far as the security questions page to sign up.
But that's all.

The Federal Government has sent an apology via Twitter...

Thanks for all your comments and updates as you enroll. We apologize that wait times on the site and hotline are longer than expected! (1/2)

Here’s the second one:

We’re working to fix these issues as soon as possible. Thanks for your patience (2/2)

Day One of the Obamacare exchanges is not quite the rollout supporters were hoping for: 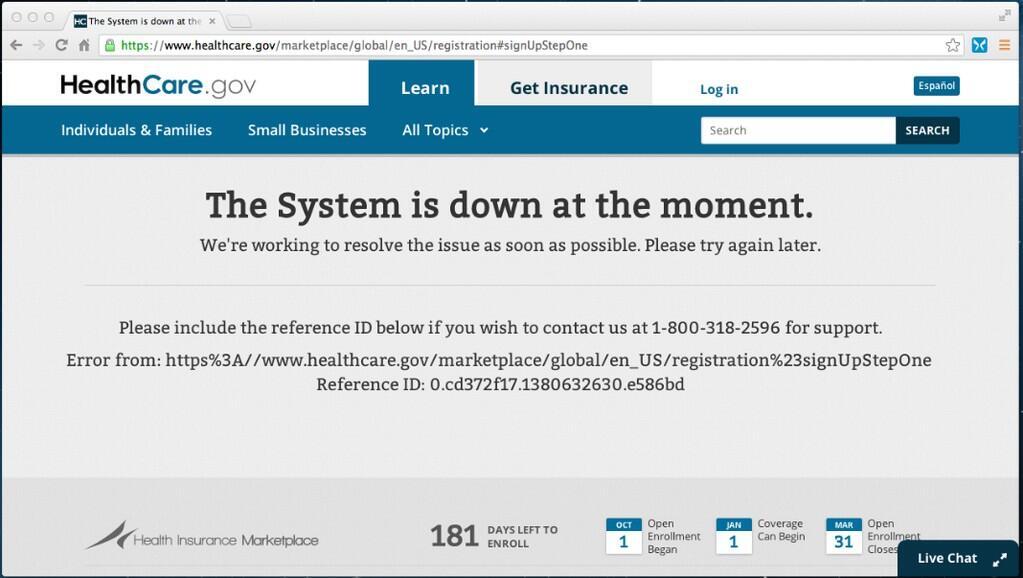 Just before 10 a.m., the administration was already apologizing for the glitches:

Thanks for all your comments and updates as you enroll. We apologize that wait times on the site and hotline are longer than expected! (1/2) — HealthCare.gov (@HealthCareGov) October 1, 2013

We’re working to fix these issues as soon as possible. Thanks for your patience (2/2) — HealthCare.gov (@HealthCareGov) October 1, 2013

Meanwhile, statewide exchanges are also running into their own problems:

MD exchange isn’t up. When I called customer service, they said call center was having issues, call back in afternoon. — Philip Klein (@philipaklein) October 1, 2013

I guess "they" are working for free since the gubmit is shut down. Best not be overtime for the parasites...

That screeching sound is the train coming off the track.