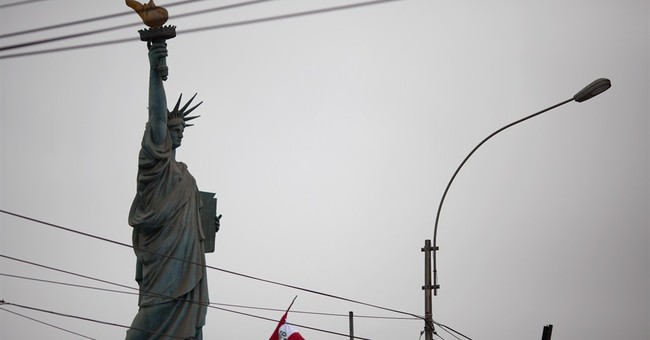 Much of government's dysfunction, cost and overreach can be traced to the abandonment of the constitutional boundaries the Founders put in place for the purpose of controlling the lust for power.

In his new book The Liberty Amendments: Restoring the American Republic, Mark R. Levin asserts the U.S. government isn't performing up to standards established by the Founders because, like a flooding river, politicians have breached their constitutional limits.

Levin, who graduated with honors and a law degree from Temple University and who hosts a popular syndicated radio talk show, believes "The nation has entered an age of post-constitutional tyranny" resulting in this attitude by our leaders: "The public is not to be informed but indoctrinated, manipulated and misled."

Before this is dismissed as the ranting of a far-right extremist, consider the case Levin builds: The executive branch has assumed for itself "broad lawmaking power," creating departments and agencies that contravene the doctrine known as separation of powers; Congress creates monstrosities like Obamacare that have no constitutional origin, spending the country into record debt and making America dependent on foreign governments, especially China; the judiciary consists of men and women who are "no more virtuous than the rest of us and in some cases less so, as they suffer from the usual human imperfections and frailties." And yet they make decisions in the name of the Constitution that cannot be defended according to the words of the Founders, who believed the judiciary should be the least powerful and consequential branch of government. In Federalist No. 78, Alexander Hamilton wrote that the judiciary branch would be the weakest of the three because it had "no influence over either the sword or the purse. ... It may truly be said to have neither FORCE nor WILL, but merely judgment."

Who can credibly disagree with Levin when he writes: "What was to be a relatively innocuous federal government, operating from a defined enumeration of specific grants of power, has become an ever-present and unaccountable force. It is the nation's largest creditor, debtor, lender, employer, consumer, contractor, grantor, property owner, tenant, insurer, health-care provider and pension guarantor."

To return America to its constitutional boundaries, Levin proposes a series of "liberty amendments" to the Constitution, beginning with one limiting the terms of congressmen so they might avoid the bipartisan virus that infects even some who believe in limited government, mutating them into power-hungry influence seekers with little regard for the public good.

Another amendment would establish term limits for Supreme Court justices. "The point is," argues Levin, "that the Framers clearly intended to create intrinsic limitations on the ability of any one branch or level of government to have unanswered authority over the other."

Another amendment would establish spending limits for the government. Another would grant states the authority to check Congress.

Levin admits these amendments are unlikely to win congressional approval because in Washington power is not willingly relinquished. That's why he proposes the states bypass Congress, as the Framers provided, and pass these amendments themselves. As Levin notes, "Article V (of the Constitution) expressly grants state legislatures significant authority to rebalance the constitutional structure for the purpose of restoring our founding principles should the federal government shed its limitations, abandon its original purpose and grow too powerful, as many delegates in Philadelphia and the state conventions had worried it might."

Americans who care about the health and future of their country have the power through the states to force the federal government to abide by its founding document. Mark Levin's book is a serious work that can serve as an action plan for curing what ails us.

What's needed is less focus on Washington and more on state capitals where legislators are more likely to be responsive to the demands of "we the people."

I am thinking more and More that Mark Levin’s option is the last best hope...

I broke down and bought a cheap DBD (that’ what my youngest grand daughter calls’em) of “OLYMPUS HAS FALLEN”, and I’m gonna drink some beers and sit here at my computer and root for the fricking North Koreans....that’s what needs to happen. I’m waiting for the WH catching all-hell scene.

4 posted on 08/15/2013 9:57:05 AM PDT by Blood of Tyrants (Inside every liberal and WOD defender is a totalitarian screaming to get out.)
[ Post Reply | Private Reply | To 1 | View Replies]
To: Blood of Tyrants
Good Government for a Good People

Exactly. Any Constitutional "solution" assumes TPTB are actually interested in obeying the Constitution. With the so-called "leadership" we have, any talk of Constitutional solutions is merely an exercise in gum flapping.

While I like some of what Mark Levin has to say, his proposal to amend the Constitution is plainly misguided. 3/4 of the legislatures would have to approve. Said another way, 1/4 of the states could derail any such attempt. More than 1/4 of the states are perfectly fine and happy with the status quo. Can you see NY or CA or RI agreeing to any of this? So changes to the Constitution are not happening.

We need to keep hammering them, Mark yesterday made a good argument that we can win this is we apply ourselves to it..

Waste your time passing whatever amendments you want. You can count on five justices ruling that those amendments don’t apply or mean something other than the clearly worded intent. We’re way past fixing things with amendments.

I will buy Mark Levin’s book. I will vote for Palin if she runs.

Other than that, I will try to stay under the radar and wait in readiness for the SHTF moment and respond accordingly.

I think I am going to switch from popcorn to peanuts.

It’s not the people in power, it is the people who put them there. We get the gov’t we deserve.

Levin is providing good talking points and ideas, but it’s not a practical solution.

The gov’t has escaped its bounds and until we have a populace that will remove politicians who countenance gov’t power grabs, we will have what we have.

The Constitution is fine. What we need is people who believe in it.

With all due respect to Mr. Levin, there’s nothing wrong with the Constitution. Previous generations of justices have already decided against much of what the corrupt, unconstitutionaly big federal government is doing today.

The problem is that generations of apathetic, working parents who use public schools mainly to babysit their children, have not been making sure that their children are being taught the federal government’s constitutionally limited powers. And Progressive socialist lawmakers have seized the opportunity provided by widespread ignorance of the federal government’s limited powers to trade constitutionally indefensible federal spending programs for votes from an “army” of low-information voters to keep socialists in power.

3/4 of states approval
Rkba mentions 3 as NOT approving.
That equals 6% by my math
2 many are 2 quick 2 throw in the towel.

Yeah a CONSTITUTIONAL CONVENTION! It will be subverted. Say goodbye to the 1, 2, 4, 5 Amendments for starters. Then they will do away with the Electoral College because the intellectually challenged will not realize that with the Dims version of voter ID, Chicago alone could print enough ballots to elect the President

I am reading and rereading Article V. I read that it all boils down to Congress, both Houses, having a final go-no go as to calling a ‘convention’ of states’. Though the Constitution is explicitly worded to say ‘shall call’ I will bet Reed and the Democratic Senate would stonewall that part of the Constitution.

The Congressional Method requires the House and Senate to pass an amendment by a two-thirds majority.

“Our Constitution was made only for a moral and religious people. It is wholly inadequate to the government of any other.” John Adams

We're evidently not on the same sheet of music.