Obama: Putin ‘slouches’ like a ‘bored kid at the back of the classroom’
Washington Examiner ^ | 8/9/13 | CHARLIE SPIERING

Reading these comments of Obama's, it makes you wish there were a book call, "On Becoming President".

This _resident has no social skills whatsoever.  He doesn't have the slightest inkling that sometimes he should just put a cork in it.

If he ever wants to have cordial relations with Putin, this isn't the way to achieve that.  Maybe he's too fricken stupid to grasp that he at the very least needs to be able to communicate.  It's all lost on this child/_resident.

FOLKS, THOSE OF YOU WHO CAN, PLEASE CLICK HERE AND PENCIL IN YOUR DONATION TO HELP END THIS FREEPATHON.  THANK YOU!
...this is a general all purpose message, and should not be seen as targeting any individual I am responding to...

Maybe Russia would be interested in a trade? Mr. Putin for Obama. After all, if Obama is “qualified” to be POTUS than so too is Mr. Putin. (You know, no birth certificate Barry)

Nothing will help our relations with the President of a powerful nation like making insulting remarks about him.

Yes : This is America’s smartest Negro.

Now you know about the average intelligence of the Congressional Black Caucus, who are not near as smart as this man.

This is your brain on drugs.

I think Putin in private, may be analyzing Bambi’s body lanuage, words and actions also. Certain phrases come to mind like:

I guess the blame bush time has come to an end...now he will blame Putin!

This guy is such a loser and embarrassment. I hope all those domestic commies and blacks that put him in office rue the day that they did.

crap I was appalled..

and part of that respect is for him to respect other leaders of countries..

He was disrespectful and a trailor trash bore himself..

I was embarrassed and ashamed for my country today..

Surely the TOTUS didnt make him sey that ???

The world knows Obama is not worth a damn for anything.

He has one talent. Reading a teleprompter. All else is following the demands of his paymasters.

The Messiah, the one, has crucified himself

There will be no resurrection, no Ascension

You could well be correct. I don’t speak Russian and found these phrases on a website of Russian insults. I thought these were appropriate phrases that Putin might use for the current resident of the White House. There were many others that he might use, but I would not include the translation on this website. 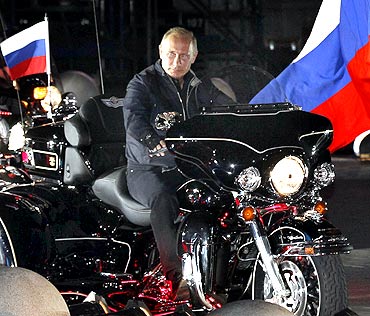 Hey, Obama, maybe he's too much of a genius to be interested in being president of Russia.

to people that have spent their life perfecting themselves and their skills, bullsh*tters (the ‘fake til you make’ it crowd) are repugnant

All joking aside.....this clown has zero class. Didn’t he get caught on an open mic making a derogatory comment about Netanyahu? What doesn’t he understand about a POTUS representing his country and people with dignity?

>> Obama: Putin ‘slouches’ like a ‘bored kid at the back of the classroom’

But does he bow like a helot to his country’s antagonists?