Frank Marchant writes: How much do you spend on your summer vacation? American households usually spend about $1,200 per person on summer vacations, according to a recent American Express survey.

Presidents spend more on their vacations than you or I. They have to. Air Force One and security does cost more than loading the Honda and heading to the beach.

Here's how much some recent presidents spent our tax dollars on vacation.

Ronald Reagan spent most of his free time at his California ranch. Taxpayers covered the cost of approximately $8 million for presidential travel during Reagan's first six years in office, according to the Los Angeles Times. That amounts to $1.3 million a year.

For George Bush the cost of flying Air Force One to his Texas ranch was approximately $56,800 per trip, for each of the 180 trips according to Media Matters. President Bush spent Christmas during his two terms at the White House so his staff and secret service could spend the holiday with their family, according to Conservative Byte.

Now Obama plans to blow away all previous presidents' leisure travel costs on our dime with a better than Disney World extravaganza trip to Africa.

However Obama had to cancel the safari because of the need to fill the surrounding jungle with snipers to guard the president from wild animals!

The trip will cost upwards of $100 million, the highest cost for any presidential vacation since Bill Clinton spent $50 million for a single vacation and it wasn't to Arkansas.

The Obama vacation will require a hospital ship stationed near their resort in case anyone needs medical attention, 14 limousines, aircraft and an additional 56 support vehicles. The cost for protecting a president is enormous.

Even so $100 million is a lot of money and I wondered just how far it would go were it spent on disadvantaged children who in their lifetimes might never have taken a single vacation. It's a wonderful thing to take a vacation. I hope the Obama's enjoy theirs.

The cost to send an impoverished child to camp for a week is around $100.00.

My figures came from the NAACP's website. From this I calculate that for the same price spent on this one Obama vacation almost all of the children in the District Of Columbia, Maryland, New Jersey, Illinois, Delaware, Connecticut, Vermont and Obama's home state of Hawaii could be sent to camp for a week.

At a time when so many have had to tighten their belts to make ends meet and many have lost jobs and homes, why can't the president just enjoy Epcot Center with his family.

When combined with Obama's recent scandals, which have created a lack of trust in the IRS, NSA and the government, I wonder if this is the best time to spend so much money on a lavish vacation.

Why isn't the media outraged?

Oh that's right, they get to go to Africa too.

listen- their extravagance warms hte hearts of recently homeless families as they struggle to find food in dumpsters, and warms the hearts of seniors who were denied cost ofl ivign increases while our dear leaderr and ilk gave themselves massive bonuses and raises, and spend wildley, and it warms the hearts of dissabled veterans who are denied medical help and benifits enough to not have to worry abotu heat, electricity, phone etc whiel dear leader and ilk vacation to the tune of hundreds of millions of dollars-

It gives these folks inspiration knowign that hteir leader is havign a good time at taxpayer expense, enjoying htemselves without a finacial worry i nthe world- knowign htat their leader will never go hungry whiel the homeless go for days without decent food-

I say bully for dear leader- he’s ‘earned it’ after all, he a black democrat- why should he suffer when so many other good and decent folks of all races can suffer in his place?

3 posted on 06/24/2013 9:12:12 AM PDT by CottShop (Scientific belief does not constitute scientific evidence, nor does it convey scientific knowledge)
[ Post Reply | Private Reply | To 1 | View Replies]
To: blam

How many “typical households” do you know who are spending $1200 per person on vacations? For a family of four, $4800...really?

We are beyond your typical household in yearly monies and we don’t spend that much.....if we even take a vacation. Our last one was 3 years ago and it was a roadtrip to Arkansas.

I think the trip would be well worth the cost...if we could leave him there permenantly.

I thought this trip was canceled?

[[Even so $100 million is a lot of money and I wondered just how far it would go were it spent on disadvantaged children who in their lifetimes might never have taken a single vacation. It’s a wonderful thing to take a vacation. ]]

$100,000,000 is chicken feed- dear leaderr has :PERSONALLY spent $1.5 BILLION taxpayer dollars on just he and his family in JUST 3 YEARS of his first term- and he’s very likely to spenmd even more the next 4 years- we’re talkign about him spending more than $3 BILLION DOLLARS on his and his families pleasures- thsi cost does NOT include business expenses, this cost was just for hteir personal pleasures- Mrs dear leader has 36 peopel waitign on her hand and foot 24/7 (apparently 2 or 3 peopel just aren’t enarly enough) at a cost of what per person per year? $60,000? $100,000?- this is just for her servants-

Dear leader spent more on gettign a treat for his dog at petco on just one day than many peopel on SS and SSD get all year- it cost over $15,000 to send security along to petco to get that toy for his dog- just one hour l ong trip and he spent more than many get in a whoel year!

Yeah- they reallty feel our pain- this latest $100,000,000 trip was nothign compared to how much of Americ’as tax money they have squandered and pissed away on themselves in just 3 years- How i nthe hell can you spend over $3,000,000,000 on yourself? What a collosal waste of money

8 posted on 06/24/2013 9:20:48 AM PDT by CottShop (Scientific belief does not constitute scientific evidence, nor does it convey scientific knowledge)
[ Post Reply | Private Reply | To 1 | View Replies]
To: MaxMax

[[I thought this trip was canceled?]]

9 posted on 06/24/2013 9:22:03 AM PDT by CottShop (Scientific belief does not constitute scientific evidence, nor does it convey scientific knowledge)
[ Post Reply | Private Reply | To 7 | View Replies]
To: All
The $100 million vacation does not include the million dollar giveaways to corrupt African dictators under the guise of "encouraging democracy" in countries w/strong-arm military dictatorships.

WHAT'S THAT? YOU MISSED THIS? $823,200 of economic stimulus funds in 2009 went to a UCLA research team to teach African men how to wash their genitals after having sex. NIH wanted to evaluate the feasibility of a post-coital genital hygiene program.

The genitalia-washing program is part of a larger $12-million UCLA study examining how to better encourage Africans to undergo HIV testing and counseling – however, only the penis-washing received money from the 2009 economic stimulus law. The tax-paid genitalia washing was set to end in 2011.

Obama is transporting to Africa thousands of taxpaid ***-washers attached to power hoses.

The Obama’s think America owes them the price of their extravagance. This is our first black president. What’s a 100 million dollars here and there? He is more than a president. He is a celebrity, an actor on the world stage, a political athlete. He is the Bill Gates of government, the man who has given us trillion dollar deficits and Obamacare. He is adored by all his fans, and all of the media is his paparazzi. In today’s world of unabashed humanism and morality of self-edification, Obama is god among the cowing masses. Give him your complete devotion. A 100 million dollar vacation for all Obama does for us, for all that he is, is chicken feed. Be ashamed for mentioning it. Consider it a gift to all the black people of Africa.

When is his trip to the space station. A trip there only costs 30-million.

These people are monetary vampires drain this country to death.

Below is ANNUAL COST. 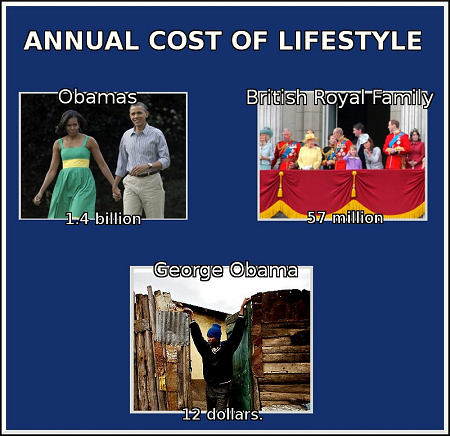 I don’t know about yearly...but we just spent about $800 a person...and a whole lot of my friends just went or are going to Disney...etc...and I’m sure they are spending that much and lots more.

NAMED FOR DEAR OLD DAD O'S HALF BRO IS READY TO CASH IN---RUNS THE TAX-EXEMPT "DO-GOOD IN KENYA" OBAMA FOUNDATION The tax- exempt “charity” named in honor of their Dad, is run by President Barack Obama’s half-brother Malik.

Obama’s half-brother Malik spends most of his time in Kenya with his 12 wives.

Malik holds up photo of Obama in Muslim dress
taken on a trip to Kenya when Ohaha was about 23-24 y/o.

From the guy who cowed GM executives into driving to DC instead of flying and admonished against conventions in Vegas.

Interesting that Kenya isn’t on the itinerary for this trip and Barry’s countrymen are very upset over the snub.

Where did Bush go on vacation? Camp David or his ranch.