MICHELLE Obama dazzled Dublin with her grace and charm, and almost outshone her husband in Belfast with her eloquence, sounding every inch the professional politician. And that is exactly what could be on the cards for her.

The talk in Washington is that she is a politician-in-waiting with her eyes on a particular seat.

"She (Michelle) is only waiting for the right time," a Washington political insider told me. And 2016 would fit that bill.

By then, her husband will be ending his second term and she would have no campaigning constraints. And 2016 also happens to be the year that a US Senate seat will be up for grabs in her native state of Illinois.

Republican senator Mark Kirk, who won her husband's old seat there, is up for re-election that year and Mrs Obama would have little trouble getting the nod from the Democratic Party.

She would be a fundraising magnet with the power of the Obama political machine behind her. A poll has even been carried out on her chances in a hypothetical match-up against Mr Kirk. It had her leading 51pc to 40pc.

She would be a formidable candidate. A lawyer and an intellectual powerhouse, who excelled at Princeton and Harvard Law School, she first met her husband when she mentored him at a Chicago law firm.

She lacks political experience. But so did another first lady before she went on to become a US senator for New York.

Hillary Clinton has already blazed the trail for Mrs Obama, and what Mrs Clinton did in New York in 2000, Mrs Obama could do in Illinois in 2016.

Chicago is also the Obama political power base and it has a strong African-American electorate. Mrs Obama would also do well among Irish-American voters.

“A lawyer and an intellectual powerhouse”

Can’t not not feed out of the government trough.

Illinois voters are stupid enough to do this.

Wouldn’t that require work, or will it be like her $350,000 a year “job” with that hospital or like her hubby voting present?

Not only do we have to survive the Democrat scoundrels’ terms in office, but apparently their wives think they have a divine right to bully us as well.

It sounds like the moose has gotten used to all those free vacations on the taxpayers dime. I could see where that would be hard to give up for a leftwing elitist.

Parhetic; but Michelle could easily win on ‘empty’. 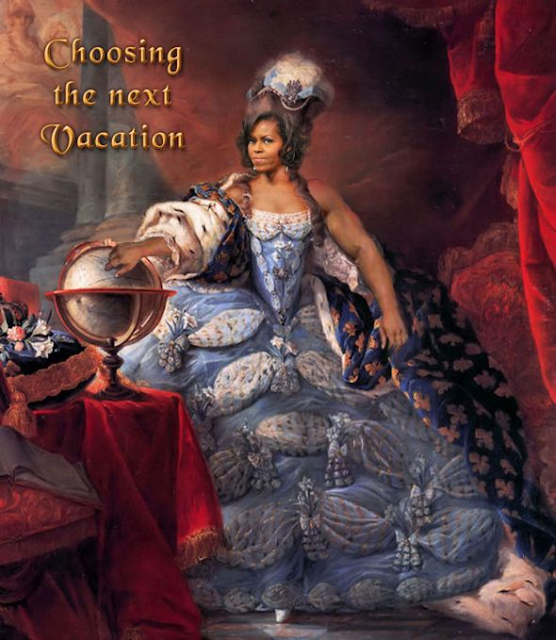 Illinois voters are stupid enough to do this.

Counting or not counting the dead?

Are the Obama’s planning a divorce? I thought he was going to live in Hawaii!

On the other hand, one of my senators is now living in NY with a wife who didn’t want to move to Oregon. He keeps an apartment here for appearances.

The first pic.....lawdy, those Spanx are all up in ‘the great hemisphere’.