Sooner Or Later Progressives Will Get Around To You
Townhall.com ^ | March 17, 2013 | Derek Hunter

First, they came for the smokers.

No one would argue smoking is good for you. But it’s legal; growing tobacco is even subsidized by the government. Yet, when governments started limiting the right of people to smoke in places public and private, non-smokers did nothing. They didn’t like smoke; they’d heard second-hand smoke was dangerous. Why should they allow owners of private establishments to choose whether those establishments allowed people to engage in a legal – in fact, subsidized -- activity?

Then, they came to “clean up” the healthcare mess. They would take the sick and poor off our hands. We would no longer have to join together as a community to provide for those who can’t provide for themselves; dear, benevolent government would do this for us. First, with Medicare for the old. Then, with Medicaid for the poor. Then, the definition of poor would expand … and expand … and expand ... and nobody would speak up because who wants to come out against the old, the sick and the poor?

But hey, when you’re a Progressive, and you’ve tried for a half-century to take over health care, who are you to let minor details such as this stand in the way? And when you get your chance – so much disaffection with a spendthrift Republican president that Democrats could grab control of both houses of Congress and both ends of Pennsylvania Avenue, you grab that chance and you pass the most sweeping Progressive legislation since the New Deal – Obamacare.

And when the rest of us find we can’t afford our health insurance because of all the new requirements placed on it by our Progressive friends and their enlightened legislation, nobody can do much more than complain. Who defends greedy insurance companies? Who defends faceless corporations when costs finally reach the point where they drop their plans, forcing their employers into the Obamacare system where Progressives have wanted them all along, or even drop their employees?

The secret is the impact is felt gradually. It’s like a boa constrictor. By the time you realize you’re in trouble, it’s too late.

Now, they come for our guns. It’s for our own good. Otherwise, we’ll have more school shootings, such as the terrible incident in Connecticut. Never mind the guns used that day were stolen. We hear about the need Newtown illustrates to limit weapons and ammunition clips that can fire several rounds per minute. We are never reminded the killer at Newtown shot 24 people in 22 minutes. Speed or power of the weapon was not an issue. One person somewhere in that school with a weapon would’ve saved many lives.

But most of us don’t think of those details, and we don’t own guns … particularly the geniuses in Washington who make these decisions. So we don’t complain sufficiently, and the Progressive agenda advances.

They also have come for the rich people. I’m not rich; what do I care if the rich get taxed a little more? Never mind that I might like to be rich one day or that almost certainly a rich person pays my salary. Never mind what it might mean to him paying salaries that his taxes keep going up. He is indefensible. He’s taken more than his fair share. Tax him. And tax him some more. And when that’s not enough, tax the rest of us … but do it in a way we don’t really see it. Not income taxes. Payroll taxes. They’re gone before we even get our checks.

If there’s one thing progressives love it’s a power grab in the name of “doing good,” and the “good” they most often wrap themselves in is “for the children.” When they eventually discover the “good” they sought to accomplish by quashing a little piece of our personal liberty did not come to pass, they never reverse course and retract their government intrusion. Instead, they offer a solution that seizes a little bit more. It’s a never-ending cycle of self-fulfilling prophecies, a Yellow Brick Road that leads to an Emerald Prison of mini-tyrannies populated by a disconnected people who stood by doing nothing because the power government was exerting did not affect them.

But sooner or later government will run out of other people to tax, other things to ban, other choices to regulate and, like a caged tiger, it will turn on the hand that feeds it. It’s its nature.

New York City Mayor Michael Bloomberg doesn’t want his people to be fat. So he tried to ban “sugary beverages larger than 16 ounces” but was rebuffed by a court, at least temporarily. Progressives do not quit, or get deterred, when voters reject their ideas, what chance does a court have?

What do the non-rich care if taxes were raised on people who were not them? What do those with health insurance care if government enacts a requirement that everyone who doesn’t have it buy health insurance?

Tyranny seldom comes all at once, it comes slowing, incrementally, in small doses cloaked as something else, something good. Each thread appears innocuous and unimportant but is part of a tapestry rarely recognized as what it is until too late.

You may not care about any of the targets progressives are pursuing now or in the near future, but they will run out of things you don’t care about before they run out of will to control. Sooner or later they will come after something you like or do. If you sit by do nothing as the individual liberty of others is continually limited, you’d better hope there are enough people left able and willing to speak up when they get around to you.

The new Nazis aknocking at the door.

Unlike my relatives who died in Auschwitz, I’m warned this time.

Now you know the whole story.

Or we will get around to them...

6 posted on 03/17/2013 2:10:00 AM PDT by BigCinBigD (...Was that okay?)
[ Post Reply | Private Reply | To 1 | View Replies]
To: Kaslin
I objected to their nanny-state overreach on smokers, even though I do not smoke. I object to their malicious overreach on the HHS abortion mandate, even though I have no moral objection to the use of birth control and of some of the items included in that mandate. As for Bloomie's silly overreach, he can have my firearms and my Big Gulp when he pries them from my cold dead hands. I just wish the GOP had a leader who felt the same.

Not only did she stick in in Bloombergs eye with the Big gulp, but also for those who criticized Rubio for takingn a sip of water. 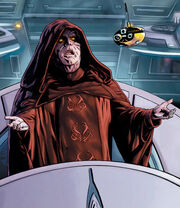 "In order to ensure our security and continuing stability, the Republic will be reorganized into the first Galactic Empire, for a safe and secure society," - Chancellor Palpatine

"So this is how liberty dies... with thunderous applause." - Padmé Amidala, to Bail Organa

From Star Wars III-Revenge of the Stith in cas someone REALLY has not seen this movie.

Somehow I doubt it.

Leftism is seductive. It preys on the emotions of people. Anger, hate, pity are it motivations.

Freedom and Liberty do not engender strong feelings until it is already gone. The reason Leftism workers so well in taking liberty is that people rarely get worked up about the loss of someone they don’t knows liberty.

The reason the US didn’t enter WW II until we were attacked was because it was someone else far away that was being attacked. The Nazis didn’t seem that bad. We didn’t know those people. The Left in this country are much the same but have learned many useful lessons from the Nazis’ failure. One big one is incrementalism. They do not try to take over the country in one fell swoop. They are taking the country inch by inch.

Most people today have no idea how much freedom they have lost in the last 90 years. People who do not study history (most today) have no notion of what has be surrendered to the Left.

The loss of small liberties tends not to provoke people to action; this is the Left’s big advantage. They always couch their restrictions on liberty in language that sounds benign and even helpful.

The Left also has strong allies in the press, the bar and academia. They are shaping the minds of our youth and building their goals in to case law.

It isn’t hopeless but we fighting them have a hard row to hoe.

Every time I meet someone who supports the government using force in support of a “good cause”, I point out to them how easily it would be for the government to do the same to them.

Few of them listen. Makes me wonder what their reaction will be when they wake up one morning with government goons taking them in because they violated someone else’s “good cause”.

The enemy is the middleclass we are the engine that moves the country we are the ones who have the guns to prevent tyranny from taking hold, we are thier number one threat, not the taliban, not alquida, not the north koreans or china we the people are.

I know where it's from but I have REALLY not seen the movie...

I saw the first two many, many times and even wrote some pretty good fiction about it (some of it professional). I saw the third movie, too, but don’t like to admit it). That was enough. :-D

Sorry, back to regularly scheduled thread.

He’ll if you look at O’s whole family tree and his associates you will find the percentage of them being card carrying Communist Party members and anarchists but the MSM won’t point this out because they are complicit in the Progressive takeover just te same.

> Every time I meet someone who supports the government using force in support of a “good cause”, I point out to them how easily it would be for the government to do the same to them.

Few of them listen. Makes me wonder what their reaction will be when they wake up one morning with government goons taking them in because they violated someone else’s “good cause”.

The phrase “young and dumb” exists for a reason. Same reason “stupid and naive” has become synonymous in describing the left / libs / proggies

Bill Maher is squealing about California’s ‘good cause’. Hypocrisy , thy name is liberal.