The previews of CNN host Piers Morgan’s interview with the President of Iran, Mahmoud Ahmadinejad, look highly entertaining. In the previews, Morgan presses Ahmadinejad hard on the issue of the taboo of homosexuality in Iran and, in previews on Monday, Morgan claimed that he pursued pressing issues like Israeli-Iranian relations. But in Ahmadinejad’s speech to the United Nations General Assembly on Monday, the Iranian leader made a mockery of even the exercise of exposing Ahmadinejad to a pliant and credulous Western media.

In the clip which Morgan previewed on CNN on Monday, he challenged Ahmadinejad rather forcefully on the issue of homosexuality – a high crime in Iran, theoretically punishable by death.

The two argued forcefully over the rights of gay men and women, which are seriously curtailed in the Islamic Republic. In fact, the United Nations’ own Human Rights Committee has recommended Iran seriously consider amending its laws pertaining to homosexuality after having found that Iran’s laws violates the International Covenant on Civil and Political Rights (ICCPR).

This type of human rights-related celebrity cause is easy to drum up indignation over. There will be no blowback from the progressive members of the nation’s news media for advocating for homosexual freedoms and human rights too forcefully.

However, I was a touch disturbed that the pull clip which CNN chose to show to promote this interview had nothing to do with the single most pressing global security issue of our time – Iran’s rapid nuclearization and the imminent threat of a preemptive Israeli strike on Iran’s enrichment facilities. Having not seen the interview, I opted to withhold judgment. But as the preview of Morgan’s interview on CNN wore on, my faith that this most dire of issues would be seriously addressed continued to wan.

My doubts about the integrity of the interview were further eroded when Morgan concluded his pitch by saying, with palpable astonishment, that Ahmadinejad’s perceived animosity towards Israel is the result of a simple misunderstanding.

Oh, there you go. A bit of a blooper. Merely a case of crossed signals. In fact, the confusion was really the fault of the West – maybe a failure of Farsi to English translation. If only those pesky Israelis would do something drastic, like unilaterally drag citizens from their homes, kicking and screaming, in order to placate international pressure groups… Wait, that didn’t work the first time?

Morgan seems to have accepted this explanation at faith value – as though Ahmadinejad’s remark was a poorly reported, one-time gaffe or a rhetorical stretch to placate an irrational constituency back home. It was not. This has been a rallying cry that Iran’s theocratic leaders found to be a guiding principle which qualified Ahmadinejad for the presidency in 2005. Futhermore, it is a threat that he has repeated countless times (though, the Anti-Defamation League has a decent running list).

The most recent being today in his speech before the United Nations General Assembly.

“Iran has been around for the last seven, 10 thousand years. They (the Israelis) have been occupying those territories for the last 60 to 70 years, with the support and force of the Westerners. They have no roots there in history,” Ahmadinejad said, ominously. “We don’t even count them as any part of any equation for Iran. During a historical phase, they (the Israelis) represent minimal disturbances that come into the picture and are then eliminated.”

Again, I have not seen Morgan’s interview and I hesitate to prejudge it. Perhaps Morgan presses Ahmadinejad on the implications that his treats have for global security and that his remarks by themselves represent an irresponsible provocation – his constituency be damned. Maybe Morgan does not let Ahmadinejad’s clarification stand and follows up by asking why he has multiple times referred to Israel as a “tumor” on the body of the Middle East that must be excised. Maybe Morgan asks why Ahmadinejad has so often denied that the Holocaust even occurred. Maybe Morgan asks why Ahmadinejad presides over the globe’s number one exporter of terror that has regularly waged terror campaigns pinside Israel and is linked to an attempted attack on U.S. soil less than one year ago.

Or maybe he just found him “charming.” Tonight, we will see. Many will be watching.

What Ahmadinejad needs to do is assume room temperature or in the case, dirt temperature. Israel will outlast him and the sooner he recognizes that, the better off he will be.

>>>”Jews in this country still vote overwhelmingly for Democrats and Obama. They have more skin in the game.”<<<

Re Mininejad, it is common knowledge in Iran that he has Jewish heritage himself, from his father’s side. They converted to Islam. His mother is said to be a direct descendant of Mohammad, hence called a “seyyed”.

Mahmoud Ahmadinejad: ‘I would have no problem with children marrying a Jew’ - http://www.telegraph.co.uk/news/worldnews/middleeast/iran/9563627/Mahmoud-Ahmadinejad-I-would-have-no-problem-with-children-marrying-a-Jew.html

There are 4 other points to be made: 1) in Iran or generally Iranian expats mostly acknowledge & know that Ahmadinejad (AN) lies too often. 2) AN despite looking like a retarded monkey, is a politician but does not call the shots in Iran. His strings are pulled by Khamenei (supreme leader). However, that is not to say AN himself does not share (some) of Khamenei’s views. 3) AN is a thug - I’ve heard many accounts of how he personally killed (shot) people, point blank, during early yrs of the Islamic revolution. 4) AN is qualified to speak about Islamic Republic, but not Iran. About the latter he should simply his trap for now. 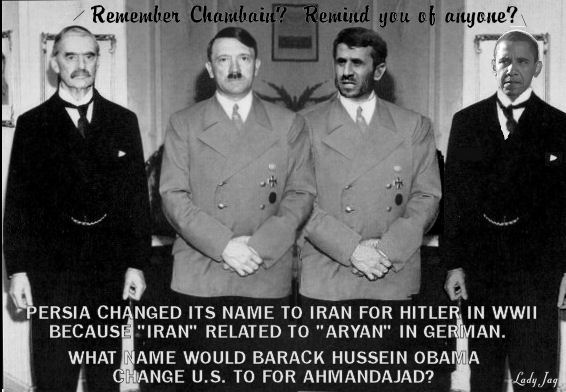 I despise Morgan and had no desire to watch him give an hour of air-time to AN.

History is more than an interest of mine.
Neville Chamberlain, AN & BHO aside, Iranians have never known Iran as “Persia”. Iran, to Iranians, has always been called & known as Iran (or its variations, centuries before islamic invasion, as e.g. Ariyana, or Eraan-Shahr) centuries before Hitler came along.
The concept & reality of German “Aryan” is/was very different to that of Iran-related “Aryan”.
Notably, unlike what Hitler was preaching for his “Aryan Race”, not many Iranians have blue eyes & blond hair, for starters.
Equally, there are no historical accounts of Iranians (or Persians for that matter), killing Jews in Iran or sending them to a concentration camps during WWII.
If anything, Iran, during WWII, was politically neutral, and did much to protect Jews, at least Iranian Jews, by providing them Iranian passports which didn’t specify religion in them.
I can understand if your pic is politically aimed at Obama, Hitler, Chamberlain & Ahmadi-Nejad.
But the specific statement about “Persia” changing its name “for Hitler” is misleading. In fact it is doing Ahmadi-Nejad & his islamic minions a favor.

You might like to acquaint yourself with this forgotten bit of history - many of them were Polish Jews, who were persecuted by both Nazis & the Soviets: http://www.cais-soas.com/CAIS/Personal_Names/polish_name_dariusz.htm

Thanks for the ping odds. Just like hitler, ahmadinejad is gay. hitler tried to remain in the closet and ahmadinejad remains in the closet so as not to be discovered. Why does anyone think gays support him? zer0 is a great example. Watch what zer0 does, not what zer0 says. Gays know ahmadinejad is gay, just like hitler was, and zer0 applauds gay dictators because zer0 want to be a gay dictator. Once more odds, thanks for the ping. It gave me a chance to tell the truth.

This is probably WHY CCN’s ratings are so far down they’re currently piping in sunlight so they can be seen.

LOL..
I’d heard AN is bisexual!