Akin said he has no plans to withdraw.

“I don’t know that I’m the only person in public office who’s suffered from foot-in-mouth disease here, and this was a very, very serious error. On the other hand, there are so many good people in Missouri who nominated me, and they understood my heart,” Akin said.
...


Akin said no Republicans have called him and asked him to withdraw from the race.

“No one has called me and said, ‘Todd, I think you should drop out,’” Akin said. “No one has said that. But I gather people are saying that in the media, but they didn’t specifically call me and tell me that.”

When Hannity, Coulter, and Malkin are telling you to go, who do you have left? Huckabee?

Yeah he’s got no choice but to withdraw now. He needs to think big picture.

I know it’s unfair, I know we’re held to a double standard, but if GOP/NRSC has indeed cut off funding, there’s no path to victory. Time to step aside.

“Last week my opponent put out a tv ad depicting me beating women. That ad is disgraceful and despicable. As a husband and father of two daughters, I found Congressman Todd Akin’s comments about rape to be in the same vein. These comments are simply unacceptable. There is no place in politics for these type of comments and attitudes toward women.”

If you look around here, there is solidarity amongst conservatives....in telling this guy to go away. If he leaves by 5 PM tomorrow, Republicans can replace him with another candidate, hopefully a much better candidate who can give McCaskill a run for her money.

In before Allen West get’s called a “RINO” or a “bed-wetter.”

The few rats still supporting Akin are scrambling and disappearing right before our very eyes.

This idiot needs to go asap. His interview w Hannity was absymal.

I read about this years ago in Francis Shaeffer’s book HOW SHOULD WE THEN LIVE? - The Rise and Decline of Western Thought and Culture.

As I recall, it quotes medical studies done on women who were raped in Nazi prison camps. The human body rejects impregnation in most cases. He’s being pilloried, for telling the truth and someone needs to come to his defense!

Yes, go fight that good fight and watch Obama clean up with even more electoral votes than he did the last time around. Recent studies identify that women have a 5% chance of getting pregnant through rape and it is estimated that there’s about 30,000 women a year who end up pregnant as a result of rape.

After all, it only makes sense that instead of discussing the economy, we should have a full-fledged debate about what “legitimate” rape is and the inner-workings of a woman’s reproductive organs.

Levin just called for him to drop out; got to get rid of McCaskill. “Our mission must be to take back the Senate.”

People like this DO NOT LEARN FROM THEIR MISTAKES.

He will repeat gaffes in the future, possibly EVEN WORSE. It’s time to Freep the heck out of anybody who can make him change his mind.

It’s sad one has to fold for a slip of the tongue. This would have never happened to a popular Democrat. I wish he would remain in the race, but by withdrawing he is saying that he doubts the people of MO are capable of understanding his slip of the tongue.

94 posted on 08/20/2012 4:22:19 PM PDT by Theodore R. (Past is prologue: The American people have again let us down in this election cycle.)
[ Post Reply | Private Reply | To 1 | View Replies]
To: Republican Wildcat
It was not “politically incorrect” - it was outrageous and nonsensical.

Which part, exactly? Is it the "legitimate rape" part? If it is, let me be the first to inform you that there are a whole lot of BS rape accusations out there. There are plenty of women who lie about rape - whether because they got caught cheating, or they are trying to blackmail, or whatever twisted reason they have. A woman who consents to have sex with a man, then decides the next day that she regrets it and charges him with rape, is not a victim of "legitimate rape". If you are going to argue that no false rape claims ever occur because women never lie about rape, then you are just a slave to political correctness. period.

Maybe it's the "women are less likely to get pregnant via legitimate rape" thing, eh? Yet, I've seen sprinkled throughout all of these threads offerings of evidence to suggest that there may be truth to that claim.

In either case, explain to me which part of Akin's statement was "nonsensical".

It doesn’t matter if his statement is true. It doesn’t matter that he was contrite in his apology. Everyone that follows politics aknowledges that he is almost certain to lose the Senate race, and his loss probably would single-handedly prevent the Senate from going GOP. His pride stands squarely in the way of repealing 0-care. The stakes could not be higher.
I think the fact that this guy will apparently not swallow his pride is even more reason to question this man’s judgement, honor, and decency. In effect, he is like 0bama, it’s all about him. Disgusting.

No one in America or the media will demand he step down. 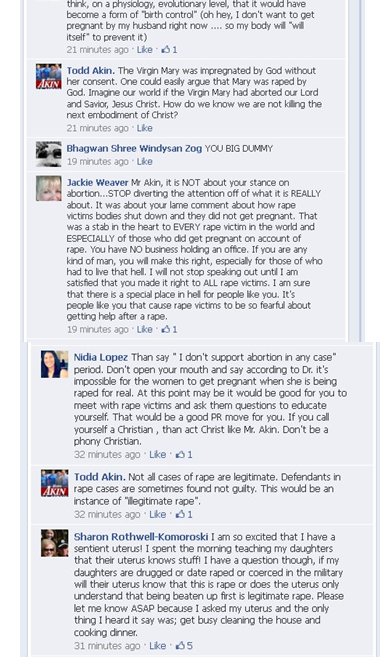 98 posted on 08/20/2012 5:34:08 PM PDT by GOP_Party_Animal
[ Post Reply | Private Reply | To 95 | View Replies]
To: Steamburg
Todd Akin is a strong supporter of the right to bear arms; he voted for the Ryan Budget; he has a 96% approval rating by the American Conservative Union; he is pro life and voted against state tax money funding abortions and he voted against the l993 tax increase and education spending increase. LOOK at Claire and her plane? her tax controversy? her vote for Obamacare. Akin made a gaffe and corrected it..he was selected by the voters of MO to run for Senate. To hell with Scott Brown and the other rinos. Google Akins RECORD VS MCCASKILLS...the man is a good conservative and I am ashamed at the gop for jumping ship. Reminds me of how Bush treated Scooter Libby..he abandoned him.
99 posted on 08/20/2012 5:36:36 PM PDT by katiedidit1
[ Post Reply | Private Reply | To 10 | View Replies]
To: Blackyce

After reading different threads on this I must admit to being confused, not that it takes much to confuse me anyway, but it seems with every passing hour there’s another conflicting report out.