While there are many chickens standing in line to peck at Rep. Michele Bachmann’s head while calling her shameful and demanding that she “fess up or shut up” perhaps its time to ask such ‘truth-phobic’ critics why they’ve chosen to indignantly point to “character assassination” when they, themselves are the actual practitioners of it. Senator John McCain, stated on the Senate floor:

McCain’s statements above are demonstrably false. The Oxford Centre for Islamic Studies / Islamic Trust Annual Reports of the Board of Trustees from the official government of Great Britain has Hassan Abedin – Huma’s brother – partnering with notorious Sheikh Yusuf Al-Qaradawi, the spiritual head and the international liaison of the Muslim Brotherhood, a known enemy of the United States and closely works with the notorious Al-Qaeda Godfather Omar Naseef whose signature is on the document that includes Huma’s brother Hassan Abedin on his board in 2004-2005 (see page 7), 2005-2006 (see page 7), and 2007-2008 (see page 12).

How can this organization (OCIS) be ‘Pro-West’ while Naseef and Qaradawi are both actively partnering with Huma Abedin’s brother?

The following statement made by McCain on the Senate floor not only defies logic but is completely irrelevant:

“Never mind that one of those individuals, Huma’s father, passed away two decades ago.”

Ah, the sympathy card… There’s a small problem for McCain here; emotion is devoid of logic. Using his formula, Osama Bin Laden’s children should be given a pass to work in the US Government in 2031 without being vetted.

Saleha Abedin (Huma’s mother) is a leader in the Muslim Sisterhood and a member of the terror-supporting Muslim Brotherhood, which gave birth to al-Qaeda. Again, using McCain’s logic, shouldn’t we wait until 20 years after Huma’s mother croaks before Huma should be eligible to hold such a lofty position?

No one on earth can refute that Huma Abedin’s mother supports marital rape, under-age marriage, polygamy and her membership of the Muslim Brotherhood is circulated in the Arab media. These are facts that should be presented to the American people to see if they think this is all guilt by association but… facts are facts.

Siham al-Qaradawi, the daughter of Yusuf Qaradawi was awarded a scholarship in the Fulbright Academic Program in 2010-2011 in the US. If we use John McCain’s logic, we cannot reject her to work in the government as “guilt by association” just because her father, Sheikh Yousuf Qaradawi is a member of the Muslim Brotherhood. After all, it was 18 years ago that he proclaimed:

In two years, those words will be two decades old. Can we ignore them then?

Applying McCain’s logic regarding Huma Abedin to Siham al-Qaradawi is the equivalent of a national suicide wish. McCain stated:

“…there is not one instance of an action, a decision, or a public position that Huma [Abedin] has taken while at the State Department that would lend credence to the charge that she is promoting anti-American activities within our government.”

The same applies to Siham Qaradawi. Would McCain find it acceptable for her to work in our government? Of course not. So who has lost their mind here? John McCain, the liberal media, or Bachmann? Was Bachman insane to state that:

“Most recently, the State Department shockingly decided to give Hani Nour Eldin, a member of an Egyptian designed terrorist group, a visa to not only enter the country in violation of the federal laws …”?

Bachmann’s former campaign chief – Ed Rollins – wrote that as a “Christian”, Bachmann should “seek forgiveness” for what she has done to Huma Abedin.

Politicians who behave as deer in fight and lions in peace have never made history. Churchill made it, Chamberlin did not. With respect to this issue, the Senator from Arizona has positioned himself to become John McChamberlain and The congresswoman from Minnesota just got a wink from Sir Winston.

Then we have some Rabbi by the name of Saperstein, who stated:

“The Reform Movement, and I personally, have worked with Ms. Abedin, Imam Magid and ISNA for many years. All have worked on behalf of U.S. interests at home and abroad, built relationships across religious lines and affirmed U.S. constitutional values.”

Where is Saperstein’s similar outrage at Islamic Society of North America (ISNA) President Imam Magid? Why hasn’t he called on Magid to condemn ISNA’s Louay Safi, who wrote:

“The war against the apostates [Saperstein] is carried out not to force them to accept Islam, but to enforce the Islamic law and maintain order.”   (Louay Safi, Religion and Politics pp.121)

Did Saperstein say or do anything when Safi was chosen by ISNA and approved by our government to lecture our troops at Ft. Hood after the Jew hating murderer of innocent Americans Nidal Malik Hassan committed the massacre? This would be like bringing a Nazi to speak to American Jews right after Auschwitz.

Then we have Keith Ellison, who told Anderson Cooper on CNN:

“U.S. Rep. Michele Bachmann’s allegations of a Muslim Brotherhood “deep penetration” of the federal government is “untrue” and a “phantom”.

The “proof” can be viewed in this English translation of an Arabic website.

Want more “proof”? What about the editor of Egypt’s al-Ahram Yahya Ghanem who, on May 20, 2010 asked Rashad Hussain in direct fashion if he is a mover and shaker for Islamist causes:

“Part of your work covers Iran since it is part of the Islamic world, have you made things happen on this level?”

Ghanem notes in the article that “Hussain refuses to talk”. Then Ghanem insists:

“Do you not think that a move on your part will have a positive impact on resolving the crisis?”

“I think so, but we will do so when the right opportunity comes.”

For “proof”, here is the full transcript.

At what level or qualifications does Rashad Hussein work to be an advisor for President Obama regarding Iran’s nuclear affairs Mr. McChamberlain?

Then we have Anderson Cooper stating:

“As per Abedin’s mother and brother, Bachmann never gives any evidence of their alleged links to the Muslim Brotherhood.”

Evidence? Try helping to answer the questions I posed to Rabbi Saperstein, Keith Ellison and Senator McChamberlain. And while he’s at it, perhaps he can air the entire, un-edited interview with me and CNN’s Drew Griffin without the typical CNN cutting and pasting to fit an agenda. Perhaps the American people can see how poorly his staff did while they sat there and ignored that in Egypt’s Tahrir Square, two million Egyptians chanted:

“to Jerusalem we march, martyrs by the millions”.

Millions of Egyptians witnessed the event, a revolution hijacked by the Muslim Brotherhood, and the CNN team failed to report it even though I sent him the proof during his inquires to me. When will the American on the street realize, it’s not about proof? It’s about coming to grips with a reality that is about to hit us in the head like a 2×4.

The tactics of the smear merchants is easy to reveal: find something someone said which was false, then write them off on everything else they say that was true. This is how the masses are fooled. It’s the oldest trick in the book. Case in point: Cooper picked on Rep. Louie Gohmert (R-TX), stating:

“Sir, do you want to offer any evidence? I’m giving you an opportunity to offer to say what research and evidence you have. You’ve offered none, other than yelling.”

Did Cooper offer any evidence or sources when CNN claimed that they checked my prison records and supposedly found none? Did CNN provide any source from the Israeli government that states my story was “fraudulent” as they claimed? Where are the official sources? They do not exist and neither can CNN provide anything except claims to fool the masses that believe the typical character assassination.

One last thing to Mr. Cooper…

I was not interested in your story coming out of the closet; you getting “penetrated” is your business, but our nation getting penetrated is mine. 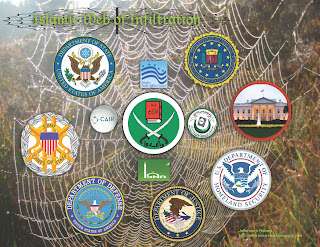 All of these attacks from these Establishment RINOs just go to show everyone how much more disdain they have for conservatives.

If republicans would fight the democrats the way they fight conservatives we would still be a constitutional republic and Barack Obama would still be making a living scamming little old black ladies out of their government checks.

A good list of our homegrown RINOs to be disposed of BY ANY MEANS NECESSARY.

......And will happily throw a conservative overboard and allow the democrat to win just to save their own pathetic asses.

the lack of interest here in this is surprising

Drudge had this as their first item after the headline

ALL of the HIGHEST Positions in the US Government since January of 1989 have been inhabited by Arab and Moslem LOVERS.

I have not one shred of doubt that Michelle Bachmann knows who the ‘enemy within’ is and will defend the country, even if it is not in her best interests politically. She puts country first. The same cannot be said about Obama, Boehner, many other politicians, the media, and sadly, in his later years, John McCain.

We need to write/call Boener and McCain in support of Michele. She has done so much for us.

call or fax Bachman to thank her