Obama Drops His Name Into the Other Presidential Biographies
commentary ^

Many of President Obama’s fervent devotees are young enough not to have much memory of the political world before the arrival of The One. Coincidentally, Obama himself feels the same way—and the White House’s official website reflects that.

The Heritage Foundation’s Rory Cooper tweeted that Obama had casually dropped his own name into Ronald Reagan’s official biography on www.whitehouse.gov, claiming credit for taking up the mantle of Reagan’s tax reform advocacy with his “Buffett Rule” gimmick. My first thought was, he must be joking. But he wasn’t—it turns out Obama has added bullet points bragging about his own accomplishments to the biographical sketches of every single U.S. president since Calvin Coolidge (except, for some reason, Gerald Ford). Here are a few examples:

This is what happens when a dictator comes to power.

[hangs head] Nice to have the First Narcissist as your head of state. Wonder if next he’ll go around adding footnotes to presidential busts about how this one was a white male slave-owner and that one might have been OK relatively speaking but wasn’t as handsome as The Won.

I’ve said it before, and I’ll say it again: It is the nature of liberals to pervert whatever they touch.

2.) Father was a goat herder – NOT EXACTLY, Obama’s father was a privileged, well educated youth, who went on to work with the Kenyan Government.

3.) Father was a proud Freedom Fighter – NOT EXACTLY, Obama’s father was part of one of the most corrupt and violent governments Kenya has ever had.

4.) Obama’s family has strong ties to African freedom – NOT EXACTLY, Obama’s cousin Raila Odinga has created mass violence in attempting to overturn a legitimate election in 2007, in Kenya . It is the first widespread violence in decades. The current government is pro-American but Odinga wants to overthrow it and establish Muslim Sharia law. Obama’s half-brother, Abongo Oba ma, is Odinga’s follower. Obama interrupted the New Hampshire campaigning to speak to Odinga on the phone. When Odinga lost the elections, his followers burned Christians’ homes and then burned men, women and children alive in a Christian church where they took shelter.. Obama SUPPORTED his cousin before the election process started. Google Obama and Odinga. No one wants to know the truth.

5.) Obama’s Grandmother Has Always Been A Christian – NOT EXACTLY, she does her daily Salat prayers at 5am according to her own interviews. Not to mention, Christianity wouldn’t allow her to have been one of 14 wives to 1 man.

7.) I Never Practiced Islam – NOT EXACTLY, Obama practiced it daily at school, where he was registered as a Muslim and kept that faith for 31 years, until his wife made him change, so he could run for office. 4-3-08 Article ‘Obama was ‘quite religious in Islam”

8.) Obama’s School in Indonesia was Christian – NOT EXACTLY, Obama was registered as Muslim there and got in trouble in Koranic Studies for making faces. February 28, 2008.

9.) Obama’s was fluent in Indonesian – NOT EXACTLY, not one teacher says Obama could speak the language.

10.) Because Obama lived in Indonesia , he has more foreign experience – NOT EXACTLY, Obama was there from the ages 6 to 10, and couldn’t even speak the language.

11.) Obama’s stronger on foreign affairs – NOT EXACTLY, except for Africa (surprise) and the Middle East (bigger surprise), Obama’se never been anywhere else on the planet.

12.) Obama blames early drug use on ethnic confusion – NOT EXACTLY, Obama’s quite content in high school to be Barry Obama.

13.) An Ebony article moved Obama to run for office – NOT EXACTLY, Ebony has yet to find the article mentioned.

14.) A Life magazine article changed Obama’s outlook On Life – NOT EXACTLY, Life has yet to find the article mentioned.

16.) Voting ‘Present’ is Common In Illinois Senate – NOT EXACTLY, they are common for Obama, but not many others have 130 NO VOTES.

17.) Oops, I Misvoted – NOT EXACTLY, only when caught by church groups and Democrats, did Obama beg to change misvotes.

18.) Obama was A professor Of law – NOT EXACTLY, Obama was a senior lecturer ON LEAVE.

19.) Obama was a Constitutional lawyer – NOT EXACTLY, he was a senior lecturer ON LEAVE.

20.) Without Obama, there would be no ethics bill – NOT EXACTLY, Obama didn’t write it, introduce it, change it or create it.

21.) The Ethics Bill was hard to pass – NOT EXACTLY, it took just 14 days from start to finish.

22.) Obama wrote a tough nuclear bill – NOT EXACTLY, Obama’s bill was rejected by his own party for its pandering and lack of all regulation.

23.) Obama released his state records – NOT EXACTLY, as of March, 2008, state bills sponsored or voted for have yet to be released.

25.) Obama’s economics bill will help America – NOT EXACTLY, Obama’s 111 economic policies were just combined into a proposal which lost 99-0 that he voted against.

26.) Obama’s has been a bold leader in Illinois – NOT EXACTLY, even supporters claim to have not seen BOLD action on his part.

27.) Obama passed 26 of his own Bills in one year – NOT EXACTLY, they were handed to him after their creation by a fellow Senator.

32.) Obama passed 900 Bills in the State Senate – NOT EXACTLY, Obama’s passed 26, most of which he didn’t write yourself.

33.) Obama believes in fairness, not tactics – NOT EXACTLY, Obama’s used tactics to eliminate Alice Palmer from running against him.

34.) Obama doesn’t take PAC Money – NOT EXACTLY, he takes loads of it.

36.) Obama’s campaign had nothing to do with The 1984 Ad – NOT EXACTLY, Obama’s own campaign worker made the ad on his Apple in one afternoon.

37.) Obama’s always been against Iraq – NOT EXACTLY, Obama’s wasn‘t in office to vote against it AND he has voted to fund it every single time.

39.) Obama’s uncle liberated Auschwitz concentration camp – NOT EXACTLY, his mother had no brothers and the Russian army did the liberating.”

I am looking forward to the day when we throw these grifters out of office, fumigate the WH, and consign the Obamas to the dustbin of history.

The little despot has to be at the center of everything, like a typical commie, needing his giant sized picture painted on every wall.

I can’t wait to see them finish the Obama connections to all former presidents.

For example, here is a line from James Buchanan’s biography:

“Presiding over a rapidly dividing Nation, Buchanan grasped inadequately the political realities of the time.”

Like President Buchanan, dithering away as the nation tetered on the edge of the abyss, President Obama blah, blah, blah......

I went to the whitehouse.gov site they linked and at first all I saw was a narcissistic photo of Obozo. Eventually I found a link to the Reagan bio, but I didn't see any reference to Obozo there.

More and more I am coming around to the thought that Romney cannot be nearly as bad as this guy. It’s almost as if Obama wants to lose, what with him going “All Gay All the Time.”

This is being mocked unmercifully on twitter with the #ObamaInHistory hashtag. People are putting him into every historical event, from the ancient Greeks to George Washington crossing the Delaware. This administration just keeps lobbing softballs.

•President Reagan designated Martin Luther King Jr. Day a national holiday; today the Obama Administration honors this tradition, with the First and Second Families participating in service projects on this day.
•In a June 28, 1985 speech Reagan called for a fairer tax code, one where a multi-millionaire did not have a lower tax rate than his secretary. Today, President Obama is calling for the same with the Buffett Rule.

I know it’s wrong to have such strong negative feelings for someone, but I absolutely can’t stand the man. I see him on tv and RUN to mute it or change the channel. 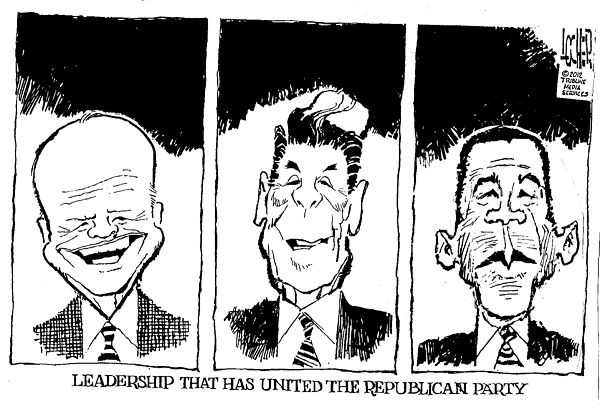 Wow. I can’t believe anyone could honestly equate Romney with Obama. Unbelievable.