When the Hamas-linked Foundation for Human Rights and Freedom and Humanitarian Relief (IHH) sponsored a “humanitarian” flotilla last summer to try and break the Israeli “siege” of Gaza, the purpose was not merely to engineer a showdown between Israeli commandos and armed IHH “peace activists.” Far more vital to the IHH’s cause was the ensuing campaign to demonize Israel in the international media, a campaign in which propagandists such as documentary filmmaker Iara Lee played a key role.

Lee later appropriated the language of the American Civil Rights Movement to describe herself and the IHH:

Israeli spokespeople insist that the Gaza Freedom Flotilla was a provocation. It was, in the sense that civil rights protesters in the American south who sat at segregated lunch counters represented a provocation to segregationists, or in the sense that all nonviolent protests against the illegitimate acts of a government are by definition provocations. Under an illegal siege, the delivery of aid to civilians is a prohibited act; the intent of our humanitarian convoy was to violate this unjust prohibition.

This account of what happened on the Mavi Marmara was reprinted in the San Francisco Chronicle, The Huffington Post, and in the O/R Books anthology Midnight on the Mavi Marmara: The Attack on the Gaza Freedom Flotilla and How it Changed the Course of the Israel/Palestine Conflict. Online it was accompanied by footage Lee shot of the event. Touted as “the video Israel doesn’t want you to see,” Lee’s images, showing the IHH attacking Israeli soldiers with slingshots and other weapons, dramatically undermine her claims of innocent moral witness.

Who is Iara Lee and what was she doing on a ship determined to provoke an agitprop showdown with Israeli soldiers? And how is she involved in the next flotilla? The answers to these questions cast a harsh light on the movement supporting Hamas by making the “siege” of Gaza into another skirmish in the international propaganda war against Israel.

Lee first began her film career in the 1980s. She was the producer of the Sao Paulo International Film Festival – located in her native Brazil – from 1984 through 1989. She relocated to New York City and began Caipirinha Productions, a multi-media company. (The Caipirinha is Brazil’s national cocktail.)

Behind Lee’s relocation to the US was her relationship with a new patron. In 1986 – when she was 20 and he was 47 – Lee met sports mogul and art film enthusiast George Gund III at the Berlin Film Festival. The couple married and the wealthy Gund started producing and distributing her films.

Throughout the 1990s Lee’s work centered on cultural issues. Her first feature documentary, “Synthetic Pleasures” (1995) focused on technology and art and featured countercultural figures Timothy Leary and R.U. Sirius. No company would release the film so Lee and Gund distributed it themselves. Lee followed this in 1998 with “Modulations,” a movie exploring the history of electronic music.

Since the beginning of Operation Iraqi Freedom in 2003 Lee has lived abroad and grown increasingly engaged in leftist political causes. The shift is reflected in her documentaries. In 2006 she lived in Lebanon, and claimed afterwards that her virulently anti-Israel political views were the result of having “experienced firsthand the 34-day Israeli bombardment of that country.” (The fact that Israel’s reaction was a response to Hezbollah’s terrorist attacks does not enter her discussion of her political development.) By 2008 Lee was living in Iran with the goal of, “promoting arts & culture for global solidarity.”

Lee has released a film this year called “Cultures of Resistance” that compiles her adventures with more than a dozen other activists. The next showing of “Cultures of Resistance” will be sponsored by Code Pink on June 29 in Los Angeles. Code Pink co-founder Jodie Evans will be on the panel and Lee will participate via skype from the Audacity of Hope in the Gaza “freedom” flotilla.

Over the past few months Lee has unstintingly promoted the next flotilla and sought new recruits. She reported on June 6 on her Facebook page, “over 300,000 people have applied for the 500 available slots on the upcoming Gaza Freedom Flotilla II Mavi Marmara boat.” On June 4 Lee celebrated her success when Holocaust denier Norman Finkelstein accepted her invitation to join. This is not the first time the two have collaborated. Finkelstein previously dubbed the filmmaker “the great Iara Lee” for her writing on what he called the “Flotilla bloodbath.” Lee and her team also produced a promotional video for Finkelstein’s last book. The short youtube clip features anti-Israel rapper Lowkey singing “Nothing is more anti-Semitic than Zionism.” In the year since its posting it has gotten 3,537 views.

Her radical friends and growing hatred of Israel have provoked the filmmaker to utilize more strident rhetoric and imagery in her work. In May of 2011 Lee’s personal Facebook account was suspended after she posted a cartoon depicting Israel as an octopus with a Swastika. (The Nazis used the common anti-Semitic characterization of the Jews as an octopus with slimy tentacles gripping the globe.) Lee wrote in protest,

FACEBOOK disabled (it is visible but i cannot update/post anymore) my personal fb page www.facebook.com/profile.php?id=100001374680948 because they consider this cartoon offensive. they sent a warning that i should remove or they would take action. i declined and they no longer let me update. my 5,000 friends there wont get my posts anymore. doubt FB considers offensive when zionists call palestinians terrorists!!!!

Lee’s efforts to demonize and isolate the Jewish state extend beyond her filmmaking and social networking. Unlike traditional documentarians who are expected to take an unbiased, journalistic approach to their subjects, Lee and Gund actually financially support the activists featured in “Cultures of Resistance” through the Iara Lee and George Gund III Foundation, established in 2004. Gund and Lee also created the Caipirinha Foundation to support Lee’s filmmaking and the activist groups in her documentaries. Lee serves as CEO of the Caipirinha Foundation and President of the Lee and Gund Foundation. Both operate out of the same office and feature the same staffs. Almost all of the foundations’ funding comes from Lee and Gund themselves.

The foundations have funneled hundreds of thousands of dollars to such organizations as Code Pink, International Crisis Group, Human Rights Watch, the Free Gaza Movement, Amnesty Internationl, and the US Campaign to End Israeli Occupation. Through Caipirinha and using the Zakat Foundation of America as a sponsor, Lee and Gund have also funded the IHH, the Turkey-based, Jihadist sponsor of last year’s flotilla.

With her immense financial resources and filmmaking background Iara Lee is Michael Moore and George Soros squished together with a hip, artsy, internationalist identity. As “Cultures of Resistance” rolls out across the country and Lee buys her way into the center of the Anti-Israel movement’s propaganda efforts she and her husband are likely to only grow in their capabilities to exacerbate the conflicts in the region.

George Gund III was born in 1936, the son of a Cleveland banker, entrepreneur and philanthropist. In the business world, the younger Gund made his mark most notably as co-owner of the National Basketball Association's Cleveland Cavaliers and the National Hockey League's San Jose Sharks. His other major sports-related business ventures have all involved professional hockey: he was a partner with the California Seals, president of the Cleveland Barons, and chairman of the Minnesota North Stars.

Gund's family has a long history of supporting the arts. His sister Agnes, for one, has developed an extensive career an art collector, arts patron, trustee, educator, and nonprofit founder. George Gund himself owns large collections of Japanese, Western, and Northwest Coast Indian art; he is also a donor to the Cowboy Poetry Festival, an annual event that made headlines in 2011 when Democratic Senator Harry Reid sought to preserve its eligibility for taxpayer funding.

One of Gund’s artistic passions is the distribution of independent and foreign films. He is a board member of Robert Redford’s Sundance Institute, the Cleveland Film Festival, the Cleveland Cinemateque, and the San Francisco International Film Festival. He also serves on the film committee for the Museum of Modern Art in New York, likely a connection facilitated by his sister.

In 1986 Gund met Korean-Brazilian filmmaker Iara Lee, whom he would later marry. Gund has produced all of Lee’s films, from her early apolitical works in the 1990s to her more recent, hard-left, anti-Israel efforts including the 2010 film Cultures of Resistance. Gund and Lee also created an online activist network, likewise named Cultures of Resistance.

In 2004 Gund and his wife co-founded the Iara Lee and George Gund III Foundation (ILGGF); two years later they established the Caipirinha Foundation (CF). Both of these entities donate funds to numerous leftist organizations. Cumulatively in 2007 and 2008, Gund and Lee contributed $1,133,562 to ILGGF's operations and $762,953 to CF.

Gund also serves as a trustee of the George Gund Foundation, which was created by his father in 1952 and requires all its grant applicants to specify precisely what they “are doing or considering to reduce or eliminate their impact on climate change.”

In 2008 Gund donated money to the political campaigns of three Democratic congressmen, as well as to ActBlue, the Fund for the Majority, and the Obama Victory Fund. Other political figures whom Gund has supported include Hillary Clinton, Dianne Feinstein, Nancy Pelosi, Barbara Boxer, and John Kerry.

And hubby's a donor to the Cowboy Poetry Festival. Small world.

Although the US Congress no longer cares about
treason as the little piggies get rich,
why are there no lawsuits against the ‘deep pockets’
of Soros, Lee, and these terrorist foundations?

"..In 2008, Lee moved to Iran, where she supported the exchange of cultural projects between Iran and the West. Lee helped produce Iranian rapper Hichkas' "Ye Mosht Sarbaz (A Bunch of Soldiers)" music video,[4] which was directed and edited by Fred Khoshtinat.[5] During that time she also worked with US-based peace organizations on efforts to promote peaceful diplomacy between the US and Iran. Also in 2008, after experiencing the 2006 Lebanon War firsthand, Iara created the Make Films Not War campaign.

Iara Lee is a council member of the International Crisis Group and the National Geographic Society, as well as a trustee for the Pyongyang University of Science and Technology, North Korea's first privately funded university, the only in the country whose faculty is entirely composed by international professors..."

This is one crazed beeatch! She belongs in a nuthouse! 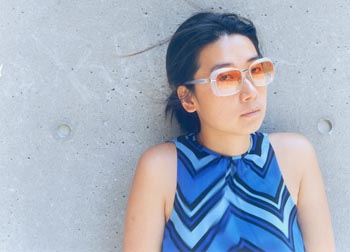