The U.S. State Department said Friday it revoked the visas of about a dozen Haitian officials, increasing pressure on the government to drop its favored candidate from the presidential runoff in favor of a popular contender who is warning of renewed protests if he is not on the ballot.

Revoking visas that let prominent Haitians enter the United States is the latest step in an escalating effort to persuade Haiti's government to accept international monitors' finding that Michel Martelly rightfully belongs on the second-round ballot.

Martelly has adopted a combative stance and urged his supporters to take to the streets peacefully if the electoral council does not allow him to run against top vote-getter Mirlande Manigat in the runoff, in place of Jude Celestin. Demonstrations in December shut down all Haiti's major cities for days, hampering earthquake reconstruction and efforts to halt a cholera outbreak that has killed nearly 4,000 people.

"We are ready to fight for justice for everyone," Martelly said at a news conference while surrounded by bodyguards. "We won't accept an electoral coup."

Any politician voting for Baby Doc to return to Haiti in any capacity is criminal. Call your elected and demand the United States send no more $$$ to this corrupt country. President's Bush and Clinton should renounce any aid to same. Baby Doc is back for one thing....easy money and any way he can get to it. 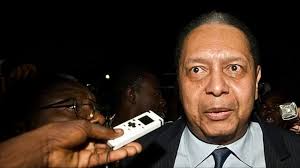 Duvalier and Aristide are very different people. Duvalier was quite obviously never in control, while Aristide ruled with an iron fist. The pat NYT version of history should not be the default setting on a conservative website.

I was a 17-year-old in the Navy when we visited Haiti in 1951. I had a turn as mess cook and had the duty of unloading our “clean” garbage on to the local bumboats. (This was fresh food just scraped off the plates from the previous meal).

I was hauling up another load when one of the other guys says, “Jeez, look at this.” One of the guys in the boat was licking those old paper wraps that ice cream slices used to come in. Another one was chowing down on a scrap of bony chicken. That was my introduction to absolute, grinding poverty.

We used to trade our worn out dungarees and shirts for trinkets like mahogany jewelry boxes made out of unseasoned wood (did’t know it then but did a month later when the seams split and the boxes fell apart.) Our electricians had a dungaree allowance as they had to crawl over the batteries to check ‘em out. The battery acid ate massive holes until there was hardly anything left - think waistband and seams. Natives fought to trade for them.

Sixty year later, nothing has changed, as it hasn’t changed in the last 100.

The elites of Haiti, some of the wealthiest in the Caribbean, will support Baby Doc as will vast numbers of the poor and middle class. They remember the stability and development he and his father sustained.

The oligarchy of these families has ruled and continues to rule Haiti to this day. The return of Baby Doc Duvalier will bring Haiti full circle to where it was 25 years ago. The more things change, the more they stay the same.

Few know much about Haiti but they talk a good game. Baby Doc was a mere shadow of a despot compared to Papa Doc who was hardcore despot.

Samir Mourra is the puppet master if Baby is back.

Haiti is one of those sad examples where iron-fisted dictatorship seems to be the only governmental system that works. People we sent to Haiti were stunned by the lack of Haitians' ability to move in any discernible direction beyond hour-to-hour subsistence. Papa Doc and his son, Baby Doc, maintained authoritarian control through an iron fist, the Ton Ton Macoutes, a jack booted force of official militaristic thugs who patrolled the streets with billy clubs.

Under Papa Doc the markets thrived, hospitals were built and there were jobs. Most critically it was safe for tourists to travel throughout Haiti.

Under military rule after the Marxist Aristide was thrown out the economy began to flourish. Many American manufacturers sent raw materials to Haiti to be made into clothing, toys and much more.

Hillary, a fan of Aristide, convinced Bill to throw the military out and reestablish Aristide’s dictatorship.

It is worse than outrageous that the most hated American in Haiti, Bill Clinton, is overseeing Haitian relief and reconstruction efforts. It is not incidental that these efforts are failing miserably.

This is a deeply corrupt nation. Corruption is tolerated if it brings with it some real improvement in the lives of the people. Not trying to boost dictators...just making a comment about the unrest and out of control behavior down there...

Baby Doc will come to power by mobilizing the masses, overthrowing the government and establishing a dictatorship. This is Haiti’s long legacy. He will throw all foreigners out of the country. Then, we shall see. I do not expect O has the audacity to oppose him. Baby Doc won’t have the support of Obama, because the professional black left supports the little Marxist, Aristide, and considers Duvalier to be a right-wing CIA puppet.

Nearly all of the infrastructure was put in place during the US Marine occupation after WWII but predating Doc, even less so following Aristide’s return.

I look forward to the Generals' return, those who threw the little Marxist, Aristide, off the island the first time. They were a respite of peace, stability and economic recovery. Clinton’s special ambassador to Haiti, Carter, pushed them out of the country and quite literally brought down the house, another fine example of Carter watering the tree of despotism with the blood of innocents.

Haitians are unable to think in terms of "future," because they're in a vicious cycle of tending to their most basic, immediate needs at the expense of any semblance of forward societal and economic movement.

Hate to say it, but it seems a dictatorial regime headed by the likes of Gen. Raoul Cedras or Baby Doc Duvalier, with all their attendant warts, may be the best hope for Haiti... at least for now.

If nothing else, a sense of order, however harshly imposed, may create opportunities for an eventual return of tourism and a regeneration of manufacturing in that unfortunate country. If "made in Haiti" vs. "made in China" will bring some needed revenue down there, I'm for it.

Perhaps at least the ox carts will run on time.

What could possibly be the motive behind this lunacy?

On the last day of December last year, Manuel “Mel” Zelaya, the deposed Honduran president and self-described victim of high-frequency radiation attacks by Israeli mercenaries, vowed to the press that he would return to Honduras. Few outside of Honduras have paid much attention to Zelaya’s MacArthur-esque prediction, but it has become apparent there is more behind his declaration than his usual hyperbole and bombastic absurdities.

Behind the scenes in the Obama administration there appears to be a concerted effort to pressure the democratically elected government of President Porfirio Lobo to dismiss charges of misappropriation of government funds and falsifying documents that are pending against Zelaya. This would open the door for his return to the country, and would be certain to undermine the delicate process of reestablishing democracy and order that is currently taking place in this poor and beleaguered nation.

When Zelaya was removed from office in July of 2009, the Obama administration at first joined with leftist dictators Fidel Castro of Cuba, Hugo Chavez of Venezuela, and Daniel Ortega of Nicaragua in calling for his reinstatement. The Obama White House seemed oblivious to the Honduran constitution, as well as the threat Zelaya posed to the stability of the country and the region. When the courageous Honduran people held firm to their democratic constitution and refused to yield to the pressure exerted by the U.S., the Obama administration found no way of saving face other than reversing course and backing the democratic presidential elections called for by their constitution.