Beautiful job! My post above described what your scale map demonstrates wonderfully!!

Thanks for those photos and the map! It really gave me perspective.

(And the closer picture of the fear/no fear was better, as the others were too dark.)

Did the crowd do as they were told — to pick up their trash? And didn’t Stewart say he had a clean-up committee? 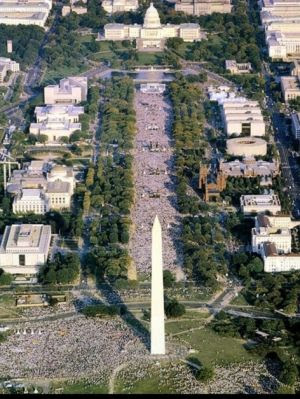 181 posted on 10/30/2010 8:59:21 PM PDT by Forgiven_Sinner (You can't fix stupid, but you can vote 'em out!)
[ Post Reply | Private Reply | To 82 | View Replies ]
To: keypro
The ovals in the schematic at the bottom are prejudicial. When I delineate the lines of sight, the trapezoids formed by the upper and lower bounds of the field of view cover very similar areas. These both appear to have been taken from the Washington monument, and the Stewart rally is further away, so it is foreshortened more.

Judging by the landmarks both crowds appear to extend for about 2200 feet along the line of sight. Of course the width and density are harder to judge.

Why is the resolution always so low in these crowd shots? They're like UFO photos, or something.

What this clearly demonstrates to me is that photographic fakery has become quite easy in the Age of Photoshop and that many people believe what they want to believe without actually giving the matter much thought. Take a close look at the far right (no pun intended) edge of the “Stewart” photo posted here. Pay particular attention to the building that looks like it has four “bar” section and then a round section in the corner. The back of the crowd (oddly in a perfect straight line across) ends at just about the spot between the closest “bar” and the round section of the building.

Now take a look at the smaller of the two photos on the CBS site, the one which shows the length of the crowd from above and to the side:

Look for the same building I pointed out in the photo here. Notice that the crowd goes back more than twice as far as is depicted in this obviously faked photo and spills out into the outlying areas.

I’d say that the CBS estimate (the only estimate as far as I know that actually commissioned professionals to do the estimate rather than just guessing) of 215,000 for the Rally to Restore Sanity and 87,000 for Beck’s Restoring Honor rally is probably reasonably accurate. Keep in mind that the Washington Monument is not located in the center of the National Mall. It’s actually much closer to the steps of the Lincoln Memorial than it is to the end of the Mall where the Stewart/Colbert podium is located (which you can clearly see in the aerial map included with the dueling rally photos). And much of the space where the Beck rally was held is taken up by reflecting pools that span most of the length between the Lincoln Memorial and the Washington Monument. The space in the middle was filled by people, not water, at the Rally to Restore Sanity.

But who cares? What difference does it make? Why is it so important that Beck’s rally be seen as having a bigger crowd than a comedy and music show? Why does everything have to be a peeing contest? Beck’s rally drew more attendees than the liberal One Nation rally (not as many more as is claimed by the right, but more), but the fact is that if you combined both the Restoring Honor and One Nation crowds (wouldn’t that be fun?) it still wouldn’t be as big as Saturday’s rally. And if you combined all three it wouldn’t match the crowd The Beach Boys drew for their 4th of July show in 1980. Perspective, people. Perspective.

This is exactly the sort of thing the underlying theme of the Rally to Restore Sanity was all about — people on both sides (note how Stewart pissed off Keith Olbermann yesterday) being paranoid, hateful, unreasonable and vitriolic rather than trying to think things through in a reasonable and calm manner. Can’t you see that by trying to deny the obvious reality you’re doing the same thing the liberals or progressives or socialists or whatever they’re calling anyone to the left of Genghis Khan these days did when they tried to claim they got a bigger crowd than Beck? Except that the crowd difference between the Beck and One Nation rallies wasn’t quite so obvious and as far as I know they didn’t resort to faked photo comparisons.

And by the way, I know you all think the Rally to Restore Sanity was some big liberal/progressive/socialist/Marxist plot, but there were a lot of Republicans there yesterday. Sure, Stewart and Colbert’s audience skew a bit left of center and the crowd probably reflected that, but these weren’t extremists. In fact, I saw a number of signs calling (in a reasonable manner) for smaller government.

The ovals are wrong. (And could give a better idea if they were rectangles.) The Beck rally crowd looks larger, for sure, when you actually look at the photos and how the crowd extents correspond to the map.

Just a note: Libs on other sites are pointing out that the ovals are wrong (they are), and also saying that the two sites’ maps are on different scales (they aren’t, as it is one single photo).

Your graphic isn’t accurate. The rally had space reserved between 4th and 7th street. The stage was just west of 4th Street. The crowd went back to 9th Street. Behind 9th the mall was blocked off for turf restoration with some flimsy little security fence — which no one breached, instead they lined up along side of it.

I went to the rally. I don’t see why the crowd size matters. People came for different reasons. A lot of people at the Sanity rally just came for the entertainment. I never criticized Beck’s rally because I felt it was meant to bring forth a positive message. Same with the Sanity rally.

While I cant make any statement about the accuracy of the Beck rally depiction. I was at the Stewart rally and I know I was in a crowd that stretched well beyond 7th street,