The financial-regulatory bill now before the Senate is so filled with special-interest loopholes and exclusions that it makes the health-care "reform" bill, with its "Cornhusker Kickback" and "Louisiana Purchase," look like a model of rectitude.

The Senate bill, sponsored by Democrat Chris Dodd, claims to subject all "too big to fail" institutions to greater federal supervision, but in fact it only mandates such regulation for bank-holding companies. Regulators would have to make a case-by-case decision on whether to apply it to other financial companies.

That's no minor oversight, because insurance companies, like AIG, tend to have thrift charters rather than bank charters. So, as the bill stands now, AIG and other insurers that accepted massive bailout funds, such as The Hartford, would not be automatically covered. That's a head-scratcher only if you forget that most insurance companies reside in Dodd's home state, Connecticut.

Musta needed a nest egg for the Irish castle... Dodd is such a xxxx

Good post. I was waiting to see the exceptions delineated. Doubtless there are more. So just to recap....
Freddie, Fanny, and derivatives will not be subject to the new regulations - even thought they (in addition to Dodd himself) were responsible for the meltdown. The only thing missing here the exemption for banks that stupidly finance houses for those that cannot afford them. It must be there somewhere. Heck, that’s only “fair”

4 posted on 04/27/2010 3:46:33 AM PDT by bossmechanic (If all else fails, hit it with a hammer)
[ Post Reply | Private Reply | To 1 | View Replies]
To: Scanian
AIG chiefs pressed to donate to Dodd
As Democrats prepared to take control of Congress after the 2006 elections,
a top boss at the insurance giant American International Group Inc. told colleagues that Sen. Christopher J. Dodd
was seeking re-election donations and he implored company executives and their spouses to give.
The message in the Nov. 17, 2006, e-mail from Joseph Cassano, AIG Financial Products chief executive, was unmistakable:
Mr. Dodd was "next in line" to be chairman of the Senate Banking, Housing and Urban Affairs Committee, which oversees the insurance industry,
and he would "have the opportunity to set the committee's agenda on issues critical to the financial services industry."


"AIG's Small London Office May Have Lost $500B"
Ground zero for AIG's spectacular implosion, which has soaked up more federal bailout money
than any other entity, appears to have been a small London branch office
that may have lost nearly half a trillion dollars in bad deals." 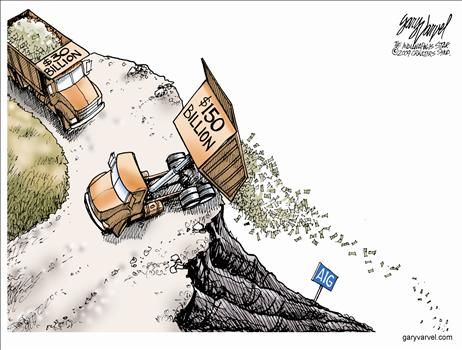 I just now watched the Glen Beck show in entirety. I only had bits and pieces when I posted earlier. I know I have the original article on Obama funding the Global exchange somewhere in my files.

BUT, here is what Glen Beck did not say. In 2006 when Goldman sachs bought 10% in this redistribution of wealth scam, Obama also bought shares of goldman sachs. I have posted this before but it so relevant again. This was all planned and Obama was going to get his share.

Fritz Dodd, the lame duck is taking point on advancing the dems agenda - he has nothing to lose.

"..For example, your real-estate agent cannot, under RESPA, be paid a fee for steering you toward a certain home inspector, title company or other closing service. Yet, under the Dodd bill, real-estate agents would be exempted from RESPA. If that weren't bad enough, the Dodd bill exempts insurers and attorneys -- both now subject to RESPA -- from its consumer protections, too..."

This kind of thing can only be the result of a payoff.

This should be under breaking news. These facts are heavy ordnance to pound the dims with. Bring on a filibuster and lay out all the kickbacks in the bill.

This is another case of the dims wanting to ram a bill through before the details are widely known. If the Republicans can hold together and throw some sunshine on this they can win the debate.

The Dog and pony beat em up show yesterday...Goldman Sachs hearing .... Chaired by Senator Levin was all about pushing this Dodd bill through!

Sen Collins will get rolled...

Why do I get the impression that Dodd is a bigger crook then any of the folks on Wall Street?