Complete Idiots Guide To Bowing in Japan: Special Copy For the White House (My Translation)
Dictionary of ABCs of Japanese Culture (in Japanese language) ^ | 16 November 2009 | AmericanInTokyo

While the book of that precise title has yet to be written (and might be a good book albeit a rather short book), the poor, bumbling White House only need to look at the following online information in order to be corrected once and for all and to also appreciate just what and what is not done in Japan, as they may continue to presumptuously assert that the "first Asia-Pacific President" schooled in these cultures was somehow being polite and sticking to protocol with the Emperor of Japan.

Here, we will be kind enough to translate it for them--spinning, apologetic, damage-control libs in the USA might also want to keep this advice straight out of Japan directly from the Japanese in mind before they sound off on topics they know little or nothing about.

It is currently located of all places as a link, temporarily up, on the Yahoo! Japan news page, below one of the top breaking stories on Obama's Tokyo "bowshake" (sic) with the Emperor.

The authoritative source which Yahoo! Japan uses is "The Dictionary of the ABCs of Japanese Culture" ("Nihon Bunka iroha jiten")[日本文化いろは事典 ], in Japanese. You cannot perhaps get a better authority on the matter than this. Even liberal professors of Japanese Culture in the US who may have donated to Obama and are now called upon to back them up in the midst of this cultural, international faux pas, may have this book on their shelves or resource on their laptops. By the way, did the US State Department or US Embassy in Tokyo have access to this material? That would have been nice.

"C: Topic:"Do not bow and shake hands at the same time"

We can say that to only lower your head is not so good for a Japanese bow. You will give the impression that your bow falls short. There are also the cases of somebody bowing their head repeatedly. In doing this, one might think you are paying the deepest respect and consideration, are being polite, etc., but the sentiment which should be expressed in the Japanese bow fails to be expressed doing this. When bowing while standing, their is the "highest respectful bow" (saikeirei), which is executed from a position of standing straight upward, and then bending 45-degrees or more. "Respectful bow" is at 30-to-40 degrees, and everyday "eshaku" around 15-degrees. "Saikeirei" is not seen on a regular basis, but is used in order to offer an apology, or when one is extremely grateful for something received, as well as performed before the altar of Shinto shrines and Bhuddist temples. In case of a handshake, straighten the back, and by all means one must look directly into the face (eyes) of the recipient of one's handshake. It is not to be too strong and not too light. Too strong will reflect an insult and too weak will not reflect good will. In America, such a weak handshake is called a "dead fish handshake", with the feeling being that the person wielding a dead fish. And, shaking a hand while performing a bow will be seen as subservient ("servile", "supple", "mean"), and is not to be done.

Gotta run to do something just now, but hope you would enjoy.

2 posted on 11/16/2009 2:04:54 AM PST by AmericanInTokyo (Major Hasan: One American "clinging to guns and religion" Obama couldn't have cared less about!!)
[ Post Reply | Private Reply | To 1 | View Replies]
To: AmericanInTokyo
Gotta run to do something just now, but hope you would enjoy.

So you're bowing out?

Well there you have it. Too bad the president doesn’t have anyone to advise him on matters of protocol. Maybe he’ll initiate such a position, and become The First Protocol President, Deluxe.

Have I told you love you yet today? LOL

This is great AIT!

Obeisance does have varying Rules of Etiquette, depending on the culture - that "Do as the Romans" thingy.

Obama, Bow to your superiors, shake with your equals, but never ever Bow Shake!

10 posted on 11/16/2009 2:49:22 AM PST by ricks_place
[ Post Reply | Private Reply | To 1 | View Replies]
To: AmericanInTokyo
Here's 0bama looking sloppy lazy and arrogant with his feet up on the White House furniture
That this stupidity extends to bowing and shaking hands simultaneously is not a surprise

You either bow or shake hands, not both
This is true in other countries not just Japan

Thanks for this AIT. I will be forwarding this commentary to many.

“Do not bow and shake hands at the same time”

That’s what I thought.

Well, actually, he is an idiot.

And I think he just did it to cover the Saudi Arabian gaffe ...

14 posted on 11/16/2009 3:48:55 AM PST by MestaMachine (One if by land, 2 if by sea, 3 if by Air Force 1. Afghanistan Updates Daily on My Profile)
[ Post Reply | Private Reply | To 12 | View Replies]
To: AmericanInTokyo
The Left touts President Nixon's bow to the emperor as precedent for Obama but in words without the photo explicitly shown. When the actual photo is examined President Nixon and the Emperor are leaning in, probably to hear each other! Ha Ha! No actual Obama Bow Shake! 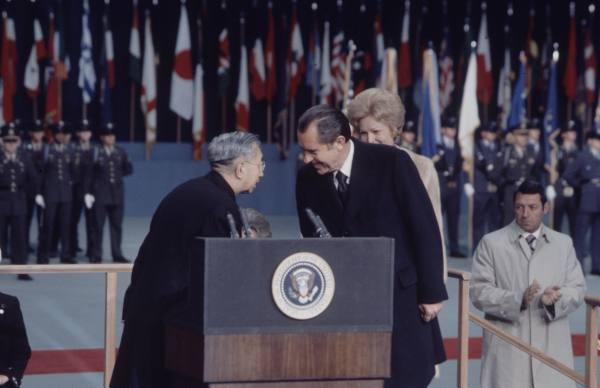 Jerk with his shoes on the furniture.

Who the hell puts their shoes on to a nice table???

Oh, I forgot, he didn’t pay for it so what the hell, hey?

Never did, never will pay for anything.

suckin’ off the government teat that’s this Community Organizer’s motto always has been always will be.

Who's in the room with him? I seem to recall that one of the deepest insults a Muslim can give is to show someone the soles of his shoes. Just sayin'... Is that a historical coffee table at the white house? I wonder if it is a gift from a previous administration, like say the Kennedy or Johnson administration.

Or did he have it bought from IKEA so he could flop his feet on it?

No, he has much to pay for, and he will pay for much.

If not in this life, then the next.