We know that former Alaska Gov. Sarah Palin can hunt, and even field-dress a moose, but how will she take to poachers on her book sales? Start-up publisher OR Books has announced plans to publish Going Rouge: Sarah Palin An American Nightmare, a collection of essays about the maverick Republican with a title — and cover design — remarkably similar to Palin’s upcoming memoir. What’s more, OR’s paperback tome will be released on Nov. 17, the same day that Palin’s own Going Rogue: An American Life hits shelves — and one day after Palin’s just-announced, first-ever appearance on Oprah Winfrey’s show. (A shout-out to Ron Hogan at GalleyCat for the tip.)

Going Rouge is compiled by Richard Kim and Betsy Reed, two top editors of the left-leaning weekly The Nation, and includes essays by Nation regulars like Katrina vanden Heuvel, Naomi Klein, and Katha Pollitt. It’s the first release from OR Books, a fledgling outfit founded earlier this year by publishing veterans John Oakes and Colin Robinson that “embraces progressive change in politics, culture and the way we do business,” according to its website.

TOPICS: Business/Economy; Culture/Society
KEYWORDS: bookreview; farleft; foolspalinattacks; goingrogue; sarahpalin Navigation: use the links below to view more comments.
first 1-20, 21-40, 41-60, 61-80, 81-90 next last
Go uninvited to your opponent's party and throw turds into their punchbowl? Is this HOW to compete?

Do I smell desperation from the far left?

Someone behind the scenes had to pay for this to happen.

They must be TRULY fearful of Sarah Palin, as well as dim-bulbs, to use this tactic. The far left moves from DUMB to DUMBER.

I predict this will GREATLY INCREASE her popularity by drawing even more attention to her book.

When you see one of these copycat books in your local bookstore, take that wad of Juicy Fruit in your jaw and make it into a book mark. 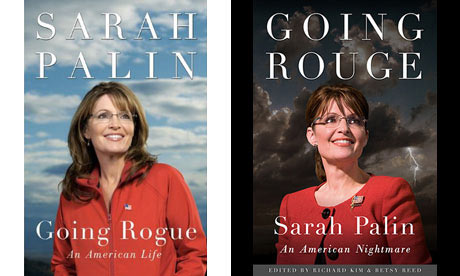 BWahahahahahaha - I hope those idiots print a million copies so they can choke on them!

SarahPAC should be well-funded enough to obtain an injuction against this book cover.

Disgusting how the far left have become. A bunch of angry, vile, maggots

are you freakin kidding me?

I’m shocked these children forgot to draw little devil horns and a mustache on Sarah before printing...

These people are pukes.

The left’s main characteristic is INTOLERANCE. Other POV’s are anathema to them.

I’m curious as to why the left hates Sarah Palin so much? She seems like a perfectly charming, even old fashioned centrist to me.

Further proof, if any is needed, that the left is stalking Sarah Palin.

I fail to see the humor or the intelligence in this. But leftists profess to be so much smarter than the rest of us, so who am I to doubt them?

Meh. It’ll only suck in WoW players that can’t spell.

Question- were there any “counter-books” against any of Huckabee’s, Romney’s or even Newt’s books?....the supposed “leaders” for the 2012 election?

We should thank them for reminding us how much she scares them. Imagine, the greatest threat to a liberal is a sucessful, popular and attractive working mom.

She invalidates their worldview, imo