"(Romney's)The state’s ambitious plan to shake up(shake down) how providers are paid could(will) have a hidden price for(from) patients: Controlling Massachusetts’ soaring medical costs, many health care leaders believe, may(will) require residents to give up their nearly unlimited freedom to go to any hospital and specialist they want..."

TOPICS: Business/Economy; Crime/Corruption; Culture/Society; Government
KEYWORDS: health; medicine; obama; romney
"During her testimony, Bigby, the state Health and Human Services secretary, said that in the transition to global payments, “we must be careful . . . not to enshrine the inequities that exist in the current system.’’ 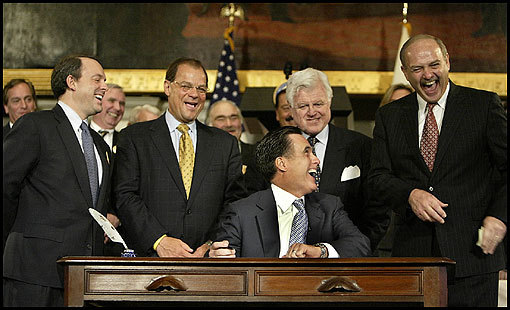 Send this story to all your liberal friends who don’t think government will ration healthcare.

2 posted on 10/12/2009 10:05:58 AM PDT by GeronL ("On my twelfth day in office, Nobel nominated me..")
[ Post Reply | Private Reply | To 1 | View Replies]
To: Leisler
There is little doubt that the state’s current system of broad choice and sometimes uncoordinated care has helped push Massachusetts health care costs above the national average.

Now the curtain is drawn back.

After being baited by a system where you have freedom of choice and few restrictions, the switch is made to impose limits.

This eventual limitation on services has happened in EVERY socialized medical system ever created.

Yep, there they are in all their glory.

The dirty little secret is that they are still laughing, hoping to bring this miserable failure to the rest of the nation.

In other words, in an age of government-controlled healthcare, don’t get sick.