Earth's self-anointed global warming czar, Al Gore, has teamed up with his business partners at Google (he's an Advisory Board member) to make the latest pitch for a planet that is about to burst into a bag of Flamin' Hot Cheetos.

Together they have created an internet video which heralds Google's entrance into the world of climate forecasting.

The video champions Google's new mapping tool which simulates a 3D map of the world predicting the effects of climate change through the year 2100.

They claim their data is provided by the Intergovernmental Panel on Climate Change. According to Google, the mapping tool was introduced in partnership with the Danish Government ahead of the United Nations Climate Change Convention in December.

In otherwords, this is a visual ruse to scare the hell of out of the uninformed masses.

Get rich or die lyin’

2 posted on 10/01/2009 10:08:51 AM PDT by wac3rd (Felipe Calderon supports the public option.)
[ Post Reply | Private Reply | To 1 | View Replies]
To: kingattax
If the folks at Google knew how to use their own search engine, they'd know that algorre is full of it. What an embarrassment.
3 posted on 10/01/2009 10:09:20 AM PDT by SunTzuWu
[ Post Reply | Private Reply | To 1 | View Replies]
To: kingattax
Never-the-less, the IPCC has based its apocalyptic "hockey stick" chart of rising global temperatures that, it now turns out, is based on the historic concentric rings on exactly 12 trees. Count 'em, twelve sets of rings. Billions of dollars ripped from the coffers of the rich countries and showered on the developing nations, industries crippled, carbon sacrificing, electricity plants shut down, etc., etc., etc. .....based on 12 trees somewhere in Russia?

It's almost laughable, if it weren't so sickening. Is it just me....or have we been had?

I just thought of a great prank. Someone should light Al Gore’s pants on fire and when he screams in pain, just say “Sounds like global warming to me!”

Since the little ice age was only 4 degrees cooler then today’s temps, anyone who supports climate change in my book is either a wacko nut case, or a fraud trying to make money off a scam. 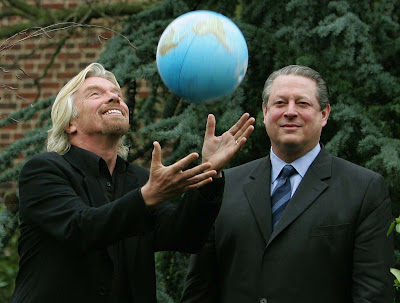 Like a Virgin ... touched for the very first time. I have to wean byself off of google

According to the Algore Doomsday clock, we only have six years left before total destruction of the planet so why did they bother to go to 2100?

I’ve been giving Bing a whirl. I miss some features on Google, but generally like it. SGAG

Wish I had the where-with-all to post this on Google to get 1st page recognition on a Global Warming search...

Joe Bastardi of Accuweather.com on Accuweather’s website and again on Bill O’Reilly’s show 9/9/09 presents irrefutable evidence which debunks claims by environmentalists that California’s wild fires were caused by Global Warming. In a few short minutes and with just a few graphics of charts and images He debunks contemporary claims of Global Warming entirely.

Certainly, many far better than myself, have refuted the false claims of Global Warming and the so called human cause of it. But for obvious reasons, those who’s attempts to do so have been thwarted by a biased agendized media, disinterested and dishonest politicians, and an ignorant distracted public.

Few of us were of the scientific background to immediately refute or take the time or expend the resources to independently research the topic entirely to where we would be fully informed. Combing the volumes of research data where deep within lay the truths that would expose the fraud has been something inaccessible to most Americans.

This is how they fooled and/or silenced most of us. Not because we were stupid but because we lacked the “at finger tip” tools to refute the liars as they told their tale.
Here is a tool. Here is a very simple, easy to replay, irrefutable presentation that is for even the layman (which most of us are) to comprehend and understand.

Not being a skilled poster I apologize in advance. I’ve always sought a simple brief presentation (which I knew would come along eventually) that I could show people I know which would prove Global Warming to be a fraud, or at a minimum, show it to be highly suspect.

Think for a moment of all the billions if not trillions of dollars which has been stolen from the American taxpayer to prop up a complete fraud. Because if it indeed is a fraud, then every action based on that fraud that has been taken is equally fraudulent also. The list includes; Greenhouse Gasses, Cafe Standards, all “green” initiatives (Fed,State,Local), “Green” related products, bogus research grants, all related taxes, all government legislation and bureaucracies, Climate Change, Oil consumption and exploration restrictions, and all other actions taken in response to a completely false and unsubstantiated premise called “Global Warming”.